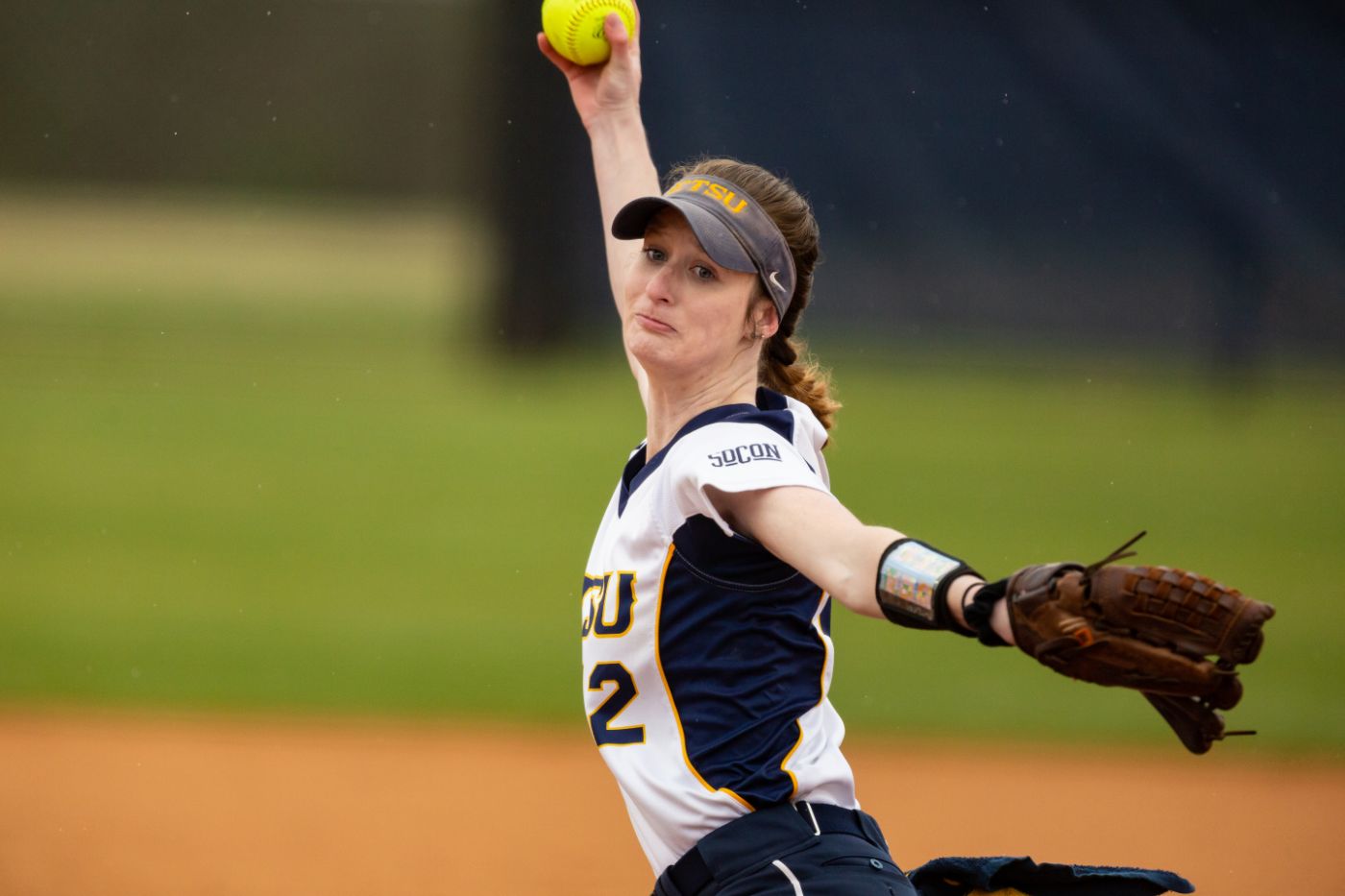 COOKEVILLE, Tenn. (March 16, 2019) – The ETSU Softball squad split a pair of Saturday shutouts in Cookeville, Tenn. with in-state rival, Tennessee Tech. The Bucs were shutout in game one by the final score of 2-0 but then returned the favor after shutting out the Golden Eagles in game two, 1-0. With the split, ETSU improves to 13-10-2 on the season.

Game 1: Tennessee Tech 2, ETSU 0
The Golden Eagles began the game with a solo shot in the home half of the first inning off the bat of Sydney Love-Baker for the early 1-0 advantage. Turns out that one run was all that Tennessee Tech needed to fend off the Bucs in game one.

ETSU nearly broke through in the second inning with runners on second and third with nobody out. However, the next three Bucs to step to the plate were punched out to end the Blue & Gold threat. The Bucs had a similar situation occur in the third inning with runners on the corners and one down. Yet again, the Golden Eagles pitched out of the jam to stymie the ETSU threat.

Tennessee Tech doubled its lead in the bottom of the fourth inning with an RBI single from Alexis Trimiar, plating Chandler Caldwell for the 2-0 lead.

ETSU could not muster any offense over the final three innings, tallying one hit and just two base runners.

Stat of the Game
Despite the loss, Taylor Boling (Jasper, Ga.) threw a strong game in the circle for ETSU. Boling allowed two runs on six hits but limited the Golden Eagles’ offense to just 1-for-8 with runners in scoring position.

Notables
» ETSU tallied just three hits as Kelly Warren (Mechanicsville, Va.), Lauren Lee (Cleveland, Tenn.) and Jordan Durbin (Mechanicsville, Va.) each registered one base knock.
» The Bucs drop their third consecutive game after being shut out for the fourth time this season.
» With the loss, ETSU falls to 8-19 all-time against the Golden Eagles.

Game 2: ETSU 1, Tennessee Tech 0
The Bucs matched their game one hit total in the first inning of game two, recording one run on three hits in the inning. ETSU’s run came off Nikki Grupp’s (Jacksonville, Fla.) RBI double to plate Lee from second, her sixth double of the season.

Just like in game one, the first run of the game was all that was needed as Kelly Schmidt (Norcross, Ga.) slammed the door shut on the Tennessee Tech offense. Schmidt yielded just three hits and never let a runner get past second base en route to her fourth shutout victory of the season.

Stat of the Game
The Golden Eagles were held to just three hits in game two and finished 0-for-2 with runners in scoring position.

Player of the Game
Kelly Schmidt picked up her fifth win of the season after throwing her ninth complete game and recording her fourth shutout victory of the season. Schmidt allowed just three hits and struck out two batters in the win.

Notables
» Grupp’s double in the first inning was her team-leading sixth double on the campaign, while also stretching her RBI count to a team-best 29 RBIs.
» Schmidt earned her fifth win of the season and first since Gardner-Webb on Feb. 22.
» ETSU tripled its hit total from game one with nine hits in game two. Lauren Lee and Demi Coleman (Maryville, Tenn.) led the team with two hits apiece.
» ETSU registered its fourth shutout of the season and first since defeating Detroit Mercy on Feb. 15 by the final of 1-0.
» With the win, ETSU improves to 9-19 all-time against the Golden Eagles.

Up Next
ETSU returns to the field on Wednesday, March 20 for a midweek, single-game showdown against Appalachian State at 5 p.m. The contest will be played at Sywassink/Lloyd Family Stadium in Boone, N.C.