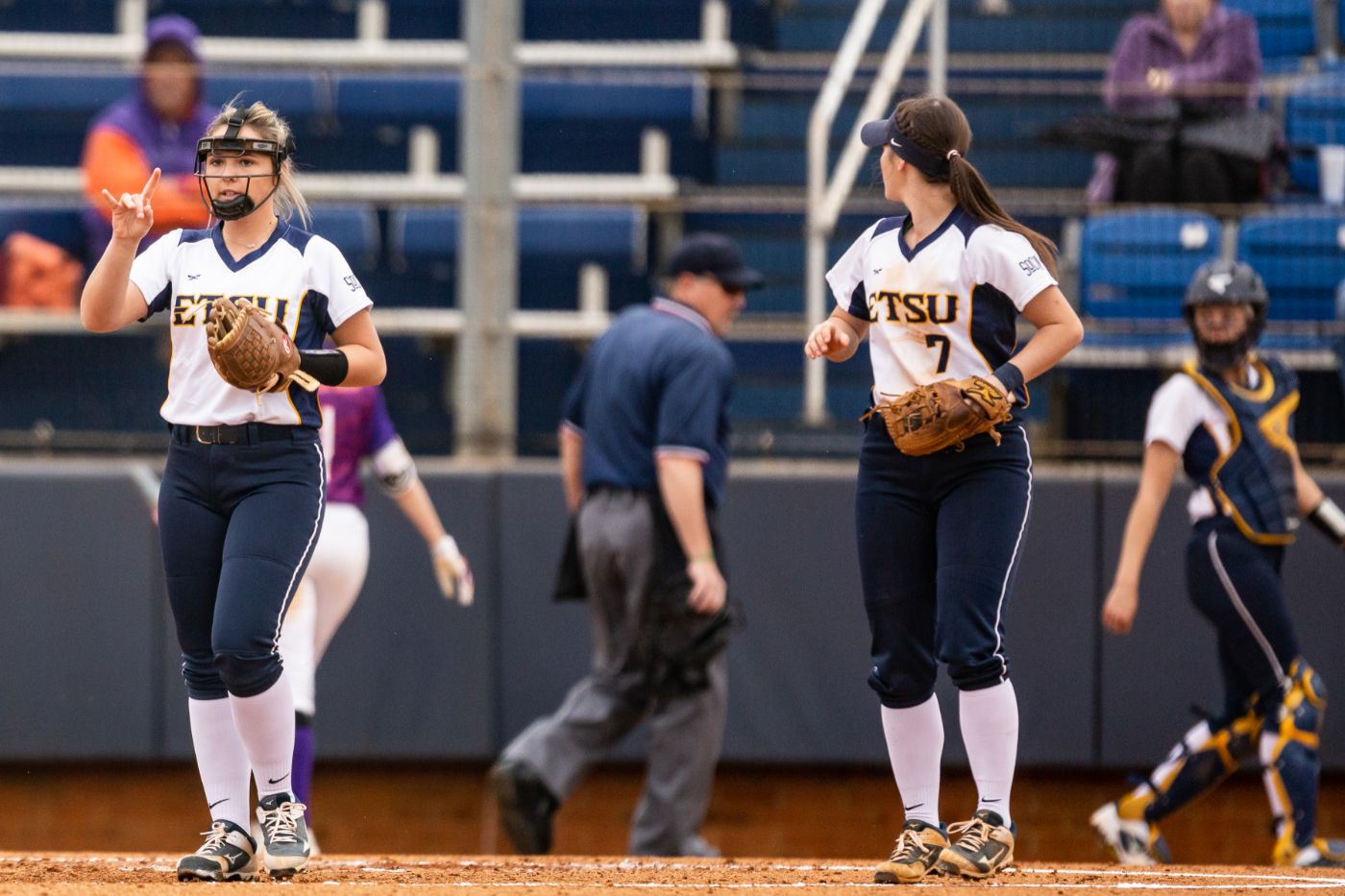 CULLOWHEE, N.C. (March 23, 2019) – Saturday was not for the faint of heart as the ETSU Bucs picked up a pair of Southern Conference victories over Western Carolina in roller coaster fashion on Saturday afternoon in Cullowhee, N.C. ETSU rallied in game one and then surrendered a six-run lead in game two, winning both games after taking a two-run lead in the top of the seventh. With the win, ETSU improves to 15-11-2 on the season and 2-0 in league play.

Game 1: ETSU 7, WCU 5
The SoCon-opening game didn’t start the way the Bucs would have liked, surrendering two runs to Western Carolina in the opening inning for the 2-0 deficit. However, ETSU pulled within one run in the top half of the fifth inning as Vanessa Elliott (Johnson City, Tenn.) connected on her first home run of the season, a solo shot to left field.

The very next inning, the Bucs tied the game up after scoring on a bases-loaded wild pitch that sent Lauren Lee (Cleveland, Tenn.) home from third. ETSU was unable to plate the go-ahead run, stranding runners at second and third to conclude the top half of the sixth inning.

The Catamounts took advantage of the Bucs’ missed opportunity, scoring three runs in the home half of the sixth inning on two hits for the 5-2 advantage.

Yet again, the Bucs proved resilient in the top half of the seventh, starting the inning off with a double by Kelsey Brown (Advance, N.C.). Brown scored on the very next at bat following a Western Carolina error. Later in the inning with runners on second and third and the Bucs down to their last out, Taylor Wright (Erwin, Tenn.) delivered a game-tying hit, a two-run single to left center to even the game at five. The very next at bat, ETSU took its first lead of the game as Kasidy Dunn (Friendsville, Tenn.) connected for her first collegiate base hit, a two-run blast to deep left field for the 7-5 lead.

Taylor Boling (Jasper, Ga.) stepped into the circle for the final inning and slammed the door shut on the Catamounts, securing the conference-opening victory.

Stat of the Game
ETSU tallied eight hits in game one, plating seven runs on those eight hits. Despite outhitting the Catamounts 8-5, the Bucs finished just 1-for-12 with runners in scoring position.

Player of the Game
Kasidy Dunn only appeared once at the plate but she made her presence felt in the top of the seventh inning with a go-ahead, two-run blast for her first collegiate base hit and long ball.

Notables
» Kelly Schmidt (Norcross, Ga.) started the game in the circle, pitching five innings of work and allowing four runs on three hits.
» Boling earned her sixth win of the season for the Bucs, allowing just one run on two hits in two innings of work.
» Elliott and Lee accounted for two hits apiece to lead ETSU at the dish.
» With the win, ETSU improves to 3-2 in SoCon-opening games since rejoining the league in 2014.
» Following the victory, the Bucs are now 20-10 all-time against the Catamounts after picking up their fifth consecutive win over Western Carolina.

Game 2: ETSU 11, WCU 9
Game two was a different start for the Blue & Gold as the Bucs came out of the gate on fire, scoring four runs on three hits to take the 4-0 lead. Kelly Warren (Mechanicsville, Va.) scored the first run of the game off a Catamount error, crossing the plate from third. The very next at bat, the Bucs stretched their lead to four following Nikki Grupp’s (Jacksonville, Fla.) eighth homer of the season, a three run shot to center field.

However the Catamounts would not go away, scoring nine of the next 12 runs to tie the game at nine apiece in the home half of the sixth inning.

The Bucs never gave up, securing the win in the top half of the seventh inning for the second consecutive game. ETSU scored the go-ahead run off the bat of Grupp with an RBI double to left center, plating Andrea Sarhatt (Knoxville, Tenn.) from second who was in to pinch run for Brown after a one-out double. Schurr doubled the lead to two runs with an RBI single to right center, bringing home Grupp for the 11-9 advantage.

Boling held on to the win for the Bucs after a 1-2-3 seventh inning for her seventh win of the season.

Player of the Game
Nikki Grupp had a monster game for ETSU, finishing a perfect 3-for-3 at the dish and registering four RBIs, including the game-winning base hit in the top of the seventh inning.

Notables
» Boling tallied her second win of the day after throwing six innings of work and yielding three runs, two earned, and striking out three batters.
» Warren, Grupp and Dunn tallied multiple hits in game two, accounting for eight of ETSU’s 14 hits.
» Dunn finished 2-of-3 at the plate, capping off a strong day in which she had her first career hit, first career homer and first career multi-hit performance.
» With the doubleheader victory, ETSU officially claimed the series for just the second SoCon-opening series win since rejoining the conference.
» This is first time since rejoining the SoCon that ETSU is off to a 2-0 start in league play.
» This is the third time that the Bucs have opened up league play with the Catamounts and just the first time that ETSU won the league-opening series over WCU.
» The Bucs have now won six consecutive games against Western Carolina following the doubleheader sweep.

Up Next
ETSU will conclude its three-game series against Western Carolina tomorrow at 1 p.m. at the Catamount Softball Complex in Cullowhee, N.C.