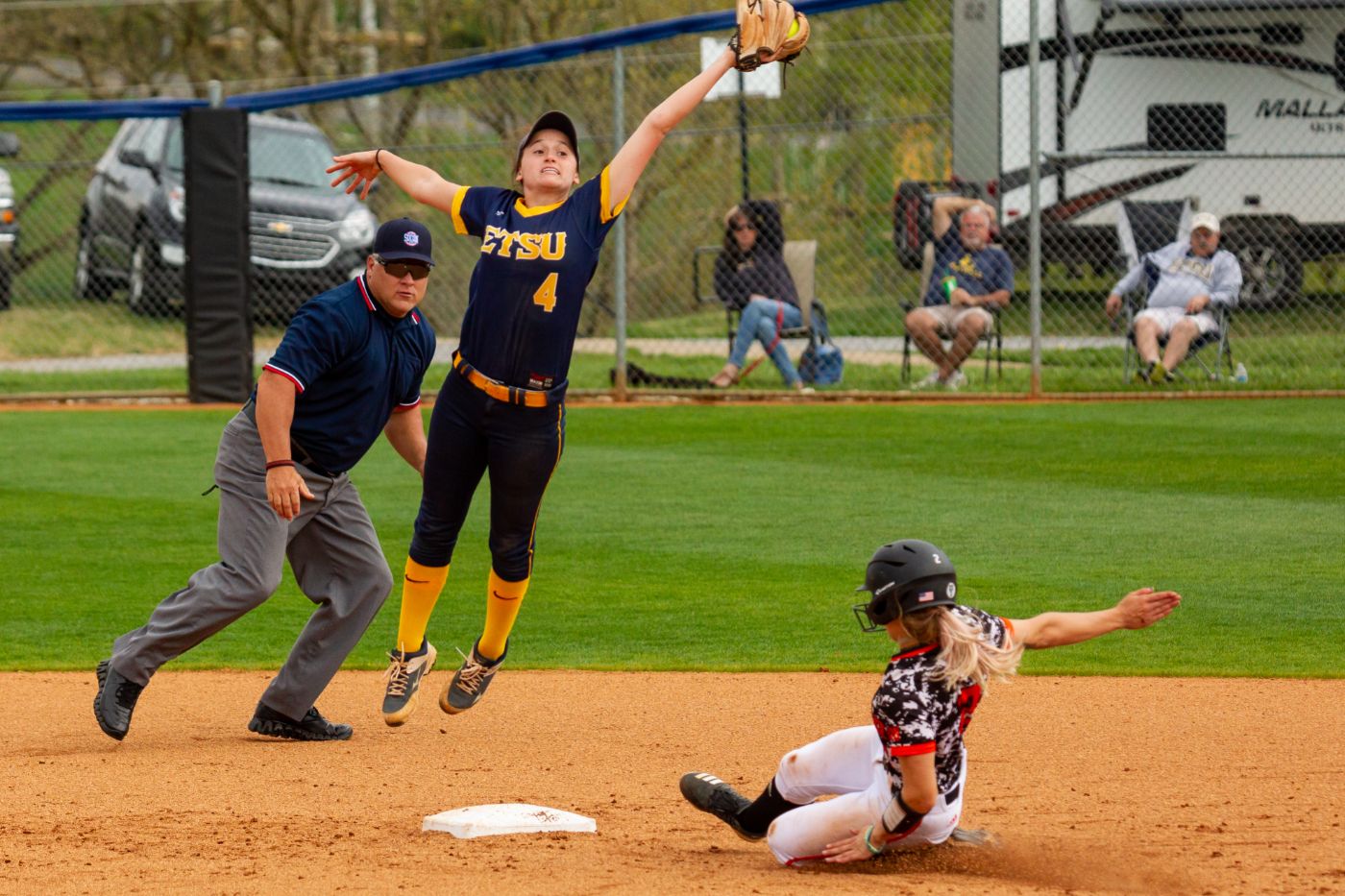 BIRMINGHAM, Ala. (April 12, 2019) – The ETSU Softball team saw its losing skid reach six consecutive games after dropping a Southern Conference doubleheader to Samford on Friday afternoon in Birmingham, Ala. With the pair of losses, ETSU falls to 17-18-2 and 3-5 in league play.

Game 1: Samford 7, ETSU 5
After the Bucs left the bases juiced in the first inning, Samford jumped on the scoreboard in the home half of the inning with a three-run blast by Whitney Hinton. Taylor Boling (Jasper, Ga.) then pitched out of a bases-loaded jam in the bottom of the first to keep the Bucs within striking distance.

The momentum seemed to shift in the top of the second inning as ETSU broke through after a wild pitch brought home Kylie Toler (Bradenton, Fla.) and put runners on the corners with two away. The Bucs took the lead on the very next at bat as Nikki Grupp (Jacksonville, Fla.) unloaded for her 10th homer of the season, a three-run shot that put ETSU in front 4-3.

The offensive explosion came to a halt until the bottom of the fifth inning when Hinton kicked off the inning with a solo home run, her second of the game, tying the contest at four apiece.

The Bucs broke the tie in the final inning of play as Malloree Schurr (Montgomery, Texas) connected on an RBI single to second base, bringing in Grupp for the 5-4 advantage in favor of the Blue & Gold.

With two on and two outs in the home half of the seventh inning, Samford turned the tides with a walk-off homer to right field off the bat of Kathryn Jackson, a three-run shot that elevated the Bulldogs to the win.

Stat of the Game
All seven of Samford’s runs came off three home runs, while three of ETSU’s tallies came via the Nikki Grupp three-run shot.

Notables
» Taylor Boling (Jasper, Ga.) picked up her seventh loss of the season, allowing seven runs, six of which were earned.
» Six different Bucs collected a base hit, with nobody recording a multi-hit game. Grupp led the charge with the three-run homer and was also hit by a pitch and intentionally walked.
» Samford’s Whitney Hinton finished 3-for-4 with two homers and four RBIs on the game.
» ETSU drops its fifth consecutive game with the loss and falls to 4-10 all-time against Samford and 1-6 when playing at Samford Softball Field.

Game 2: Samford 8, ETSU 0 (Six Innings)
The second game was all Samford, taking a 6-0 lead after the first two innings of work. Hinton connected on her third homer of the day, a three-run shot in the first inning for the 3-0 lead. Kelsey Royalty accounted for the other three runs in the second inning with a three-run homer of her own. The Bulldogs added insurance runs in the fifth and sixth inning, stretching the lead to 8-0 in the sixth inning, forcing the game to be called due to the run rule.

The Bucs tallied six hits in game two but were 0-for-6 with runners in scoring position and 3-of-13 with runners on base.

Kelly Schmidt (Norcross, Ga.) was tagged with the loss, allowing six earned runs in four innings of work for her eighth loss of the season.

Stat of the Game
The story of the game was Samford’s timely hitting, batting .667 (8-12) with runners on base and .625 (5-8) with runners in scoring position. However, ETSU was the better team at hitting with two outs, batting .400 in said situations.

Notables
» Julia Fritz (Glen Allen, Va.) saw her first action in the circle this season, throwing one and one-third innings, allowing two runs and striking out one batter.
» Toler and Jordan Durbin (Mechanicsville, Va.) finished game two with two hits apiece to lead the ETSU offense.
» Bucs struggled to get Samford’s Whitney Hinton out today, finishing 5-for-6 with three homers and eight RBIs.
» ETSU falls to 4-11 all-time against Samford and 1-7 when playing at Samford Softball Field.

Up Next
ETSU will conclude the series on Saturday, April 13 at 1 p.m. ET, aiming to snap the six-game losing skid.