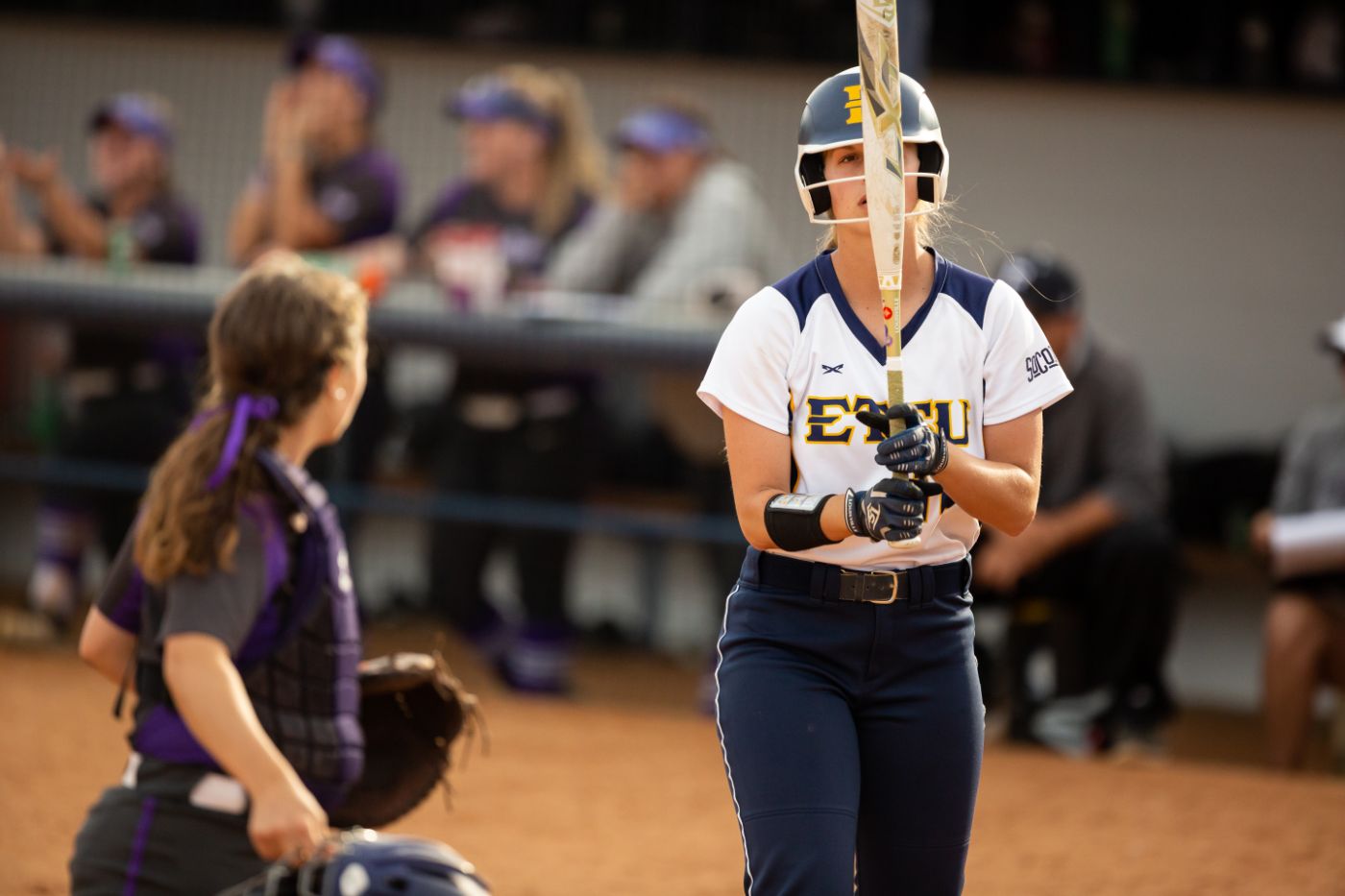 GREENSBORO, N.C. (May 3, 2019) – The ETSU Buccaneers softball team split its final regular season doubleheader on Friday in Greensboro, N.C., claiming game two against the Spartans by the final score of 5-4. The Bucs dropped game one, 2-0, splitting the day’s events, improving to 20-24-2 on the season and 6-10 in Southern Conference play.

Game 1: UNCG 2, ETSU 0
Nothing was doing for either offense in the first four innings of play as the two squads combined for four hits total, two hits apiece. Nikki Grupp (Jacksonville, Fla.) was responsible for one of ETSU’s two hits in the first four innings, a two-out double in the opening frame. Kelly Warren (Mechanicsville, Va.) tallied the other hit in the third inning.

The Spartans broke through in the fifth inning off back-to-back bases-load singles, plating two runs on four hits in the inning. Taylor Boling (Jasper, Ga.) closed the door on any further damage, limiting the Spartans to just the two runs.

The Bucs only mustered one hit in the final two innings, unable to close the deficit, resulting in the game-one loss.

Stat of the Game
Despite surrendering eight hits in the opening game, Boling was able to limit the damage after throwing a complete game and allowing just two runs. Boling stranded 11 UNCG runners on base in the loss.

Notables
» Four different Buccaneers plated a base hit in game one, led by Grupp’s double in the first inning.
» The Bucs were held at bay on offense, striking out nine times, while unable to draw a single walk.
» With the loss, ETSU falls to 7-26 all-time against UNCG and 3-12 all-time against the Spartans at the UNCG Softball Stadium.

Game 2: ETSU 5, UNCG 4
The Bucs fell behind quickly in game two, surrendering back-to-back solo home runs in the bottom of the first inning for the 2-0 deficit.

However, Taylor Wright (Erwin, Tenn.) pulled ETSU within one run in the top of the second frame with a solo shot of her own, a deep blast to straight away center field for her second long ball of the season.

The Bucs then tied the game up with aggressive baserunning in the third inning as Warren stole her 18th bag of the season. Warren’s speediness resulted in an errant throw from the UNCG catcher, allowing the Virginia native to come all the way around to score and tie the game at two apiece.

The Bucs broke the game open in the top half of the fourth inning, beginning with Malloree Schurr’s (Montgomery, Texas) RBI single, plating Grupp from second. Vanessa Elliott (Johnson City, Tenn.) added to the scoring list with an RBI single of her own to bring home Julia Fritz (Glen Allen, Va.). The scoring concluded when Warren reached on an error from the Spartans, allowing Schurr to score from third for the 5-2 advantage.

UNCG pulled within one run in the home half of the fifth inning as Gabi Howard connected on a two-out, two-run double down the left field line.

The Bucs were unable to add an insurance run in the sixth inning despite registering two base hits. The Spartans returned the favor however, recording two hits in the home half of the final inning but were also unable to cross the plate.

Stat of the Game
After a clean first game, the Spartans struggled in the field with two errors that resulted in a pair of ETSU runs. The Bucs also nearly doubled the plate production in game two, finishing with seven hits and two walks.

Player of the Game
MacKenzie Dyson (Hanahan, S.C.) picked up the pace when the Bucs needed it, throwing five innings of bullpen work and allowing two runs on four hits with one strikeout. Dyson’s efforts earned her a fifth win of the season.

Notables
» Malloree Schurr finished with two of ETSU’s three hits, while five others contributed with one hit apiece.
» Julia Fritz picked up her first save of the season, throwing one and two-thirds scoreless innings, while allowing just two hits.
» Kelly Schmidt (Norcross, Ga.) started game two for the Bucs, allowing two homers in one-thirds inning pitched.
» The Bucs reached the 20-win plateau for the third time in four seasons, surpassing last year’s mark of 19 wins.
» With the win, ETSU improves to 8-26 all-time against UNCG and 4-12 all-time against the Spartans at the UNCG Softball Stadium.

Up Next
ETSU will conclude the 2019 regular season on Saturday, May 4 with a single game at UNCG starting at 2 p.m. at the UNCG Softball Stadium.