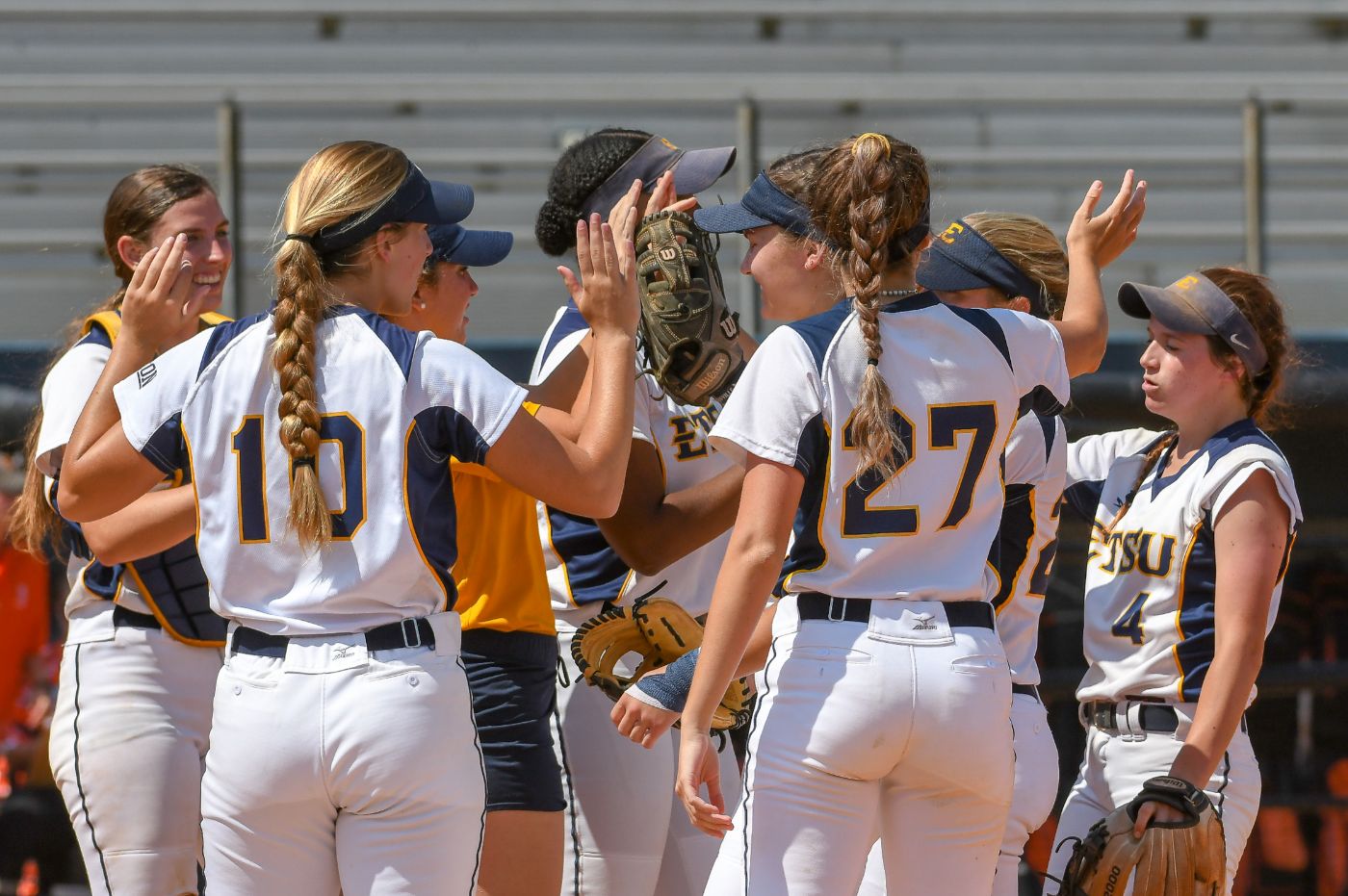 ETSU advances in the winner’s bracket with 5-1 victory

CHATTANOOGA, Tenn. (May 8, 2019) – The ETSU Buccaneers Softball team kicked off the 2019 Southern Conference Tournament with a bang yet again, cruising to a 5-1 victory over fourth-seeded Mercer in the opening game. With the win, No. 5 seed ETSU improves to 21-25-2 on the season and advances into the winner’s bracket where the Bucs will square off with top-seed UNCG on Thursday, May 9 at 12:30 p.m.

The Bears delivered the first blow of the game in the home half of the second inning after a leadoff single by Abby Walsh followed by an RBI triple off the bat of Megan Lane. Taylor Boling (Jasper, Ga.) maintained composure, inducing a double play on the next at bat with a pop up and then a hose back to third to double up Lane. Boling’s ability to shut down the scoring threat proved to be pivotal as the freshman pitcher allowed only four more hits and zero runs in the final five innings.

The Bucs drew even in the top half of the fourth inning as Kylie Toler (Bradenton, Fla.) connected for her fifth double of the season, an RBI shot to right center to bring Nikki Grupp (Jacksonville, Fla.) home from second. ETSU stranded runners in scoring position to conclude the inning, heading into the fifth all square at one.

The Blue & Gold struck again and struck big in the fifth inning after Mercer turned to Lynn Gardner in the circle. After a one-out single from Kelly Warren (Mechanicsville, Va.), ETSU’s Julia Fritz (Glen Allen, Va.) roped a two-run homer over the right center fence, her third of the season, elevating the Bucs on top 3-1. Fritz, First Team All-SoCon honoree, hit her second home run in as many games with her two-run blast in the fifth. Two batters later, the Bucs saw their lead double to four after Taylor Wright (Erwin, Tenn.) unloaded on a screaming moon shot to deep left field, her third homer of the season. Wright’s long ball pushed the ETSU lead to 5-1 heading into the bottom of the fifth.

The Bears could not figure out Boling in the closing innings as the Georgia freshman allowed just one hit over the final three frames, holding on to the 5-1 lead and pushing the Bucs into the win column.

Stat of the Game
The Bucs did their damage in the second half of the game, tallying seven hits and five runs in the final four innings of play, while holding the Bears to three hits and zero runs during the span.

Player(s) of the Game
Taylor Boling and Taylor Wright garnered co-player of the game honors for their performances in the circle and at the plate. Boling tossed a complete game, allowing six hits and striking out three batters while giving up zero walks. Wright finished 2-for-3 at the plate with one home run, two RBIs and one walk. Wright also tallied a team-high six put outs.

Notables
» With the win, ETSU is now 8-2 in its last 10 SoCon Tournament games and has now won three consecutive tournament openers.
» Boling picked up her eighth win of the season and first since March 23 at Western Carolina.
» Fritz’s third homer and Toler’s fifth double of the season marked personal single-season bests for the duo.
» The Bucs are now 14-24 all-time against Mercer, including a perfect 4-0 in neutral-site games.

Up Next
The Bucs will take on top-seed UNCG tomorrow at 12:30 p.m. in game five of the SoCon Tournament. There is weather making its way into the Chattanooga area, so stay tuned to Twitter and ETSUBucs.com for further updates on game times.