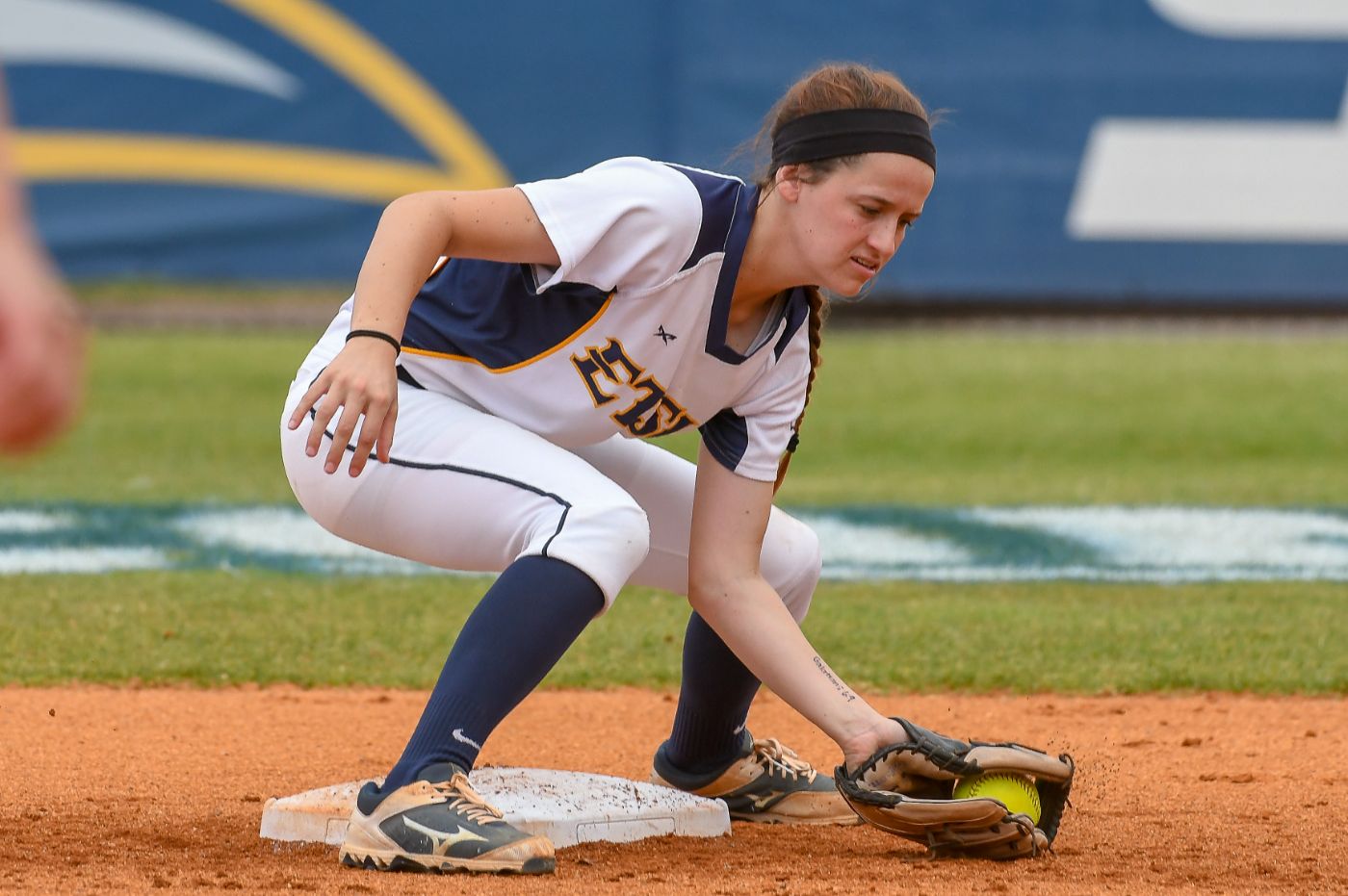 Bucs Knock Out Samford in Night Cap
ETSU at Samford | May 09, 2019
Related Links

ETSU pulls away in eighth inning

CHATTANOOGA, Tenn. (May 9, 2019) – The resilience of the ETSU Bucs was answered on late Thursday night as ETSU fought off a four-hour weather delay before eliminating the No. 2 seed Samford Bulldogs in eight innings by the final score of 5-2. The fifth-seeded Bucs improve to 2-1 in tournament play this year, while improving to 22-26-2 on the season.

The Bucs nearly broke through first in the top half of the second inning after putting runners on second and third with two away, but a harmless ground ball allowed the Bulldogs to escape. Samford then took advantage of the missed opportunity in the next inning, plating one run on two hits and one ETSU error. The Bulldogs were held to just the one run despite loading the bases as Taylor Boling (Jasper, Ga.) induced back-to-back pop ups to end the threat.

ETSU drew even in the top of the fourth inning with one swing of the bat as Taylor Wright (Erwin, Tenn.) caught the attention of everybody in the stadium with a lead off no doubter to dead center field, her second home run of the tournament. Wright’s solo blast was the fourth of the season and by far the longest home run on the year from the Tennessee native.

Neither team could put the go-ahead run on the board over the next two innings as Boling escaped a couple of sticky situations with her performance in the circle. It wasn’t until the seventh inning that the lead was claimed, this time by the Bucs following Julia Fritz’s (Glen Allen, Va.) clutch RBI single up the middle.

However, things were a little dicey in the home half of the seventh after Samford put runners on first and second with two away. The Bulldogs tied things up in the fifth at bat of the inning as Kathryn Jackson singled to second base, bringing home Ryan Brzozoski from second. The threat was halted there as Boling recorded the final out to send the game into extra innings.

Fans did not have to wait long in extra innings as the Bucs quickly took the lead with three runs on three hits, jumping all over Taylor DeCelles who entered the game in relief. The scoring did not occur until there were two outs and the bases juiced with sophomore Lauren Lee (Cleveland, Tenn.) up to bat. After falling behind in the count, 1-2, Lee battled back and eventually drew the game-winning walk, bringing home Anissa Avila (Black Mountain, N.C.) from third. The game was put out of hand in the next at bat with Kelly Warren’s (Mechanicsville, Va.) third hit of the ball game, an RBI single to second base. Two runs would score on the play with Malloree Schurr (Montgomery, Texas) scoring on the hit and Vanessa Elliott (Johnson City, Tenn.) scoring on the throw back to first.

Boling shut the door on any hopes of Samford’s comeback, throwing a hitless eighth inning with a punch out to end the game with an exclamation point.

Stat of the Game
The Bucs tallied 17 hits in three games against Samford in the regular season. In tonight’s elimination game, ETSU was able to pepper the ball, tallying 11 hits for its 12th double-digit hitting performance of the season.

Player of the Game
Taylor Boling is proving that she is built for the Southern Conference Tournament, improving to 2-0 in consecutive tournament starts. Boling finished the game with eight innings pitched, two runs allowed and four strikeouts.

Notables
» Boling picked up her ninth win of the season and second consecutive in as many days. Prior to the tournament, Boling was winless in her previous 12 starts.
» Warren finished the game with a team-high three hits, recording one RBI in the process. Schurr chipped in for two hits, while six other players registered one base hit.
» For the second consecutive day, Wright unloaded on a no-doubt home run that could be heard throughout the city.
» Despite falling to Samford three times in the regular season, ETSU gets the final laugh after knocking the Bulldogs out of the tournament for the second time in three seasons.

Up Next
ETSU will return to action at approximately 2 p.m. on Friday afternoon at Frost Stadium. The Bucs will take on the winner of No. 4 Mercer and No. 7 Western Carolina which will be played at 9 a.m. tomorrow morning.