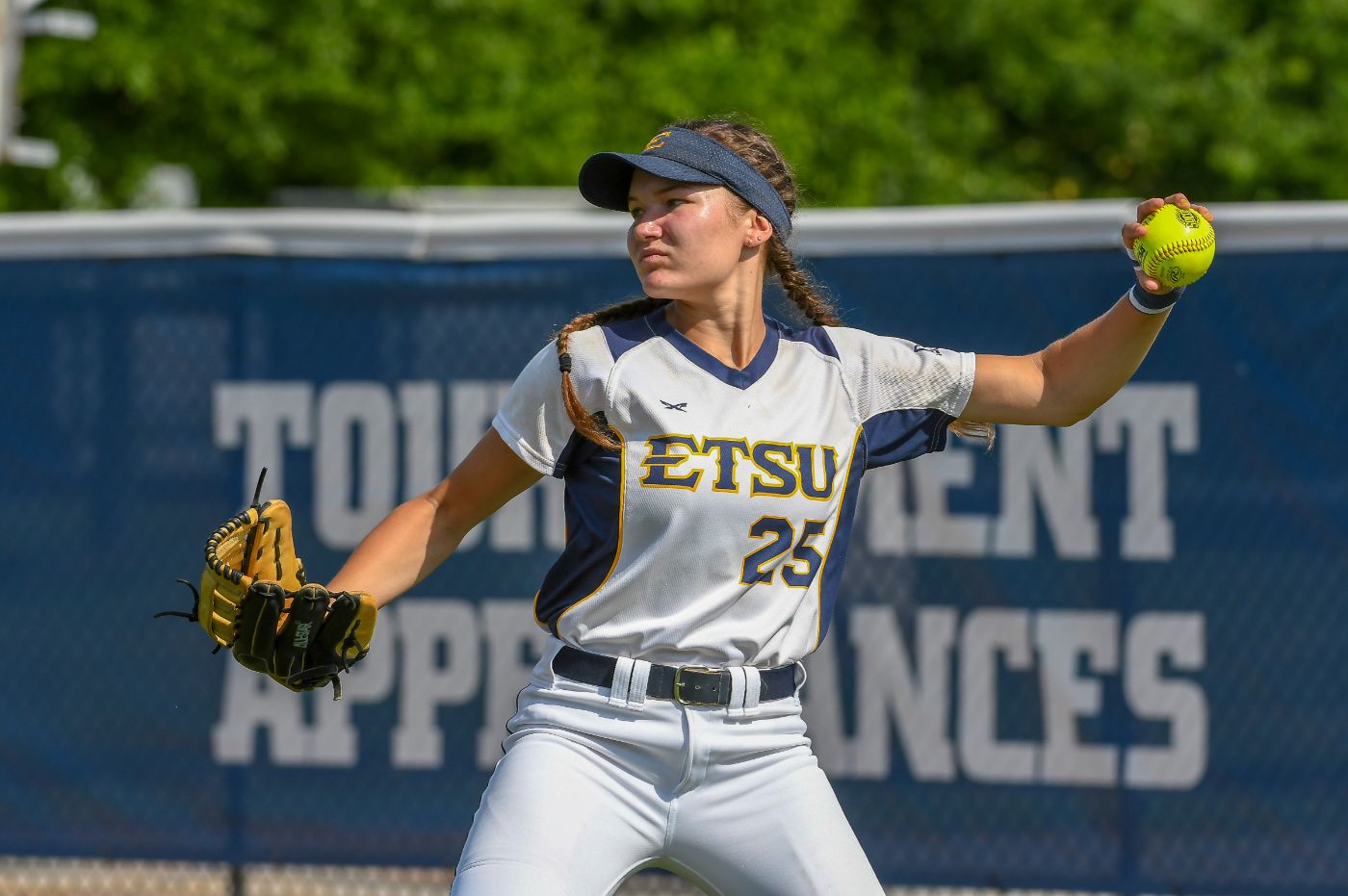 STATESBORO, Ga. (Feb. 8, 2020) – The ETSU Softball team remains in search of its first win in the early season after dropping Saturday’s doubleheader in Statesboro, Ga. The Bucs fall to 0-3 on the campaign after suffering losses to both Army and Georgia Southern on Saturday afternoon.

Game 1: Army 7, ETSU 4
The Black Knights struck first in game one following a bases-loaded walk with one away for the 1-0 advantage. ETSU senior pitcher Kelly Schmidt (Norcross, Ga.) buckled down and recorded back-to-back outs to limit the damage.

Army stormed back quickly in the bottom of the fifth inning, bringing home six runs on six hits to take the 7-3 lead.

ETSU would go on to plate one more run in the top of the seventh inning as Kelly Warren (Mechanicsville, Va.) continued her hot start to the season with an RBI single to left field.

Stat of the Game
Following a four-error game in the season opener, the Bucs cleaned up the defense with just one miscue in the field in game two of the Bash in the Boro tournament.

Notables
» Kelly Warren finished the game 3-for-3 at the dish with one RBI and one run scored…Fritz was the other multi-hit Buccaneer with two base knocks.
» Schmidt threw 5.2 innings of work, allowing six hits and one earned run, while striking out four batters.
» MacKenzie Dyson (Hanahan, S.C.) was tacked with the loss after allowing six runs in one-third inning.
» The Bucs fall to 0-2 all-time against Army following the loss.

Game 2: Georgia Southern 9, ETSU 3
The Eagles struck quick and early in ETSU’s final game of the day, plating five runs on four hits in just the first inning of play.

The Bucs scored their first run of the game in the third inning after a passed ball allowed Kelsey Brown (Advance, N.C.) to score from third. However, the Eagles responded with a two-run home run in the bottom of the frame to extend their lead to 7-1.

The two teams traded two more runs apiece with the Bucs scoring their final runs in the top of the fifth inning after an RBI double by Fritz and then a wild pitch in the next at bat that brought the Virginia native home from third. Fritz’s run solidified the 9-3 score in favor of the home team.

Stat of the Game
Georgia Southern scored nine runs on 12 hits in the ball game, the second consecutive double-digit hit count allowed by the Bucs.

Notables
» Kelly Warren tied a career high in hits in a single game after finishing 4-for-4 at the plate…The Virginia native accomplished the feat against UNCG on May 4, 2019.
» Warren is now 8-of-10 (.800) through the first three games this season.
» Fritz and Lauren Lee (Cleveland, Tenn.) picked up the remaining two hits for ETSU.

Up Next
ETSU will close out the Bash in the Boro tomorrow with a 9 a.m. start against Rutgers. The Bucs dropped the season opener to the Scarlet Knights, 6-3.