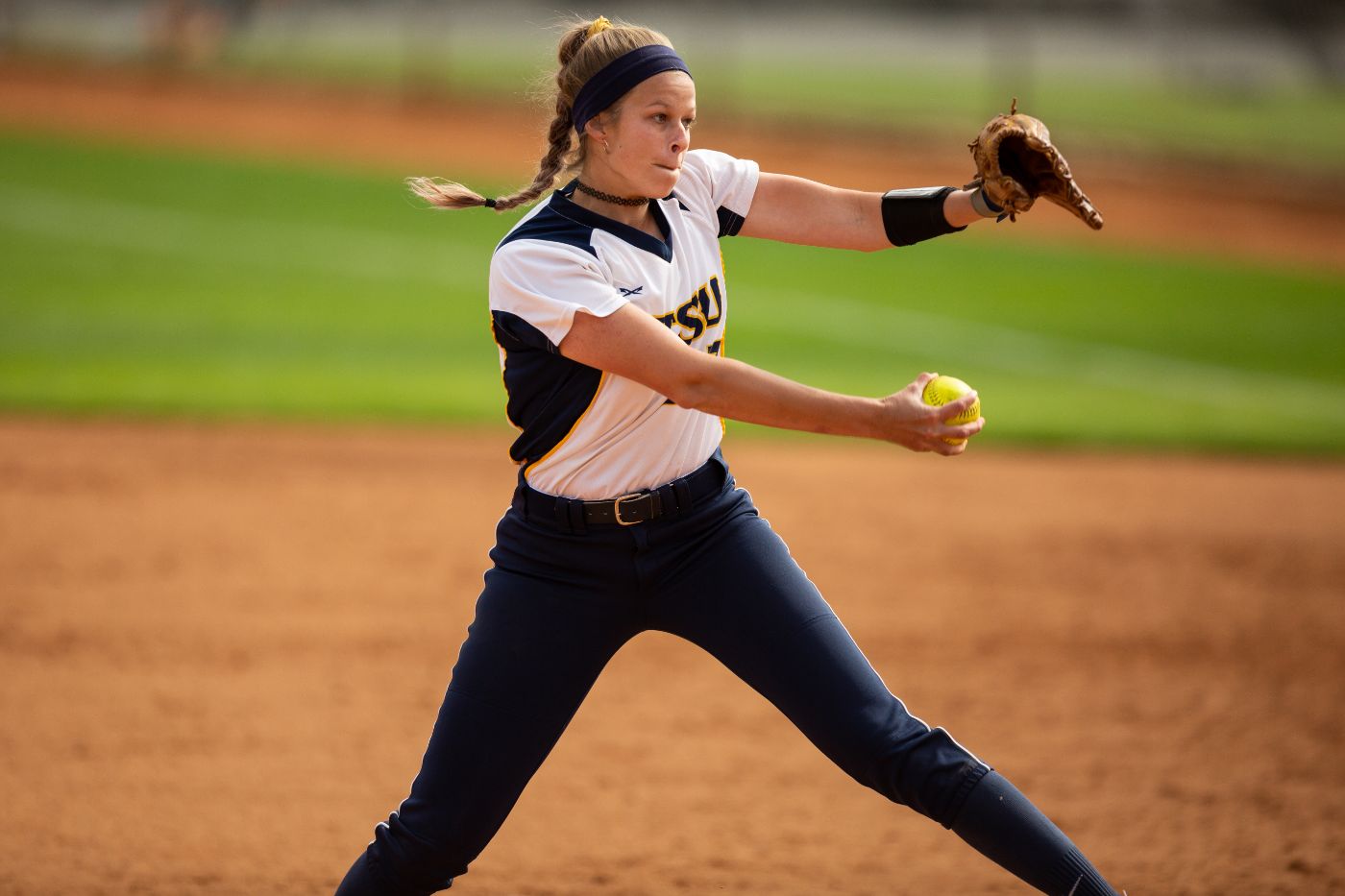 Bucs improve to 3-1 on the weekend in Jacksonville, Fla.

JACKSONVILLE, Fla. (Feb. 15, 2020) – Day two of the Osprey Dolphin Invite saw the Bucs split a twin bill, shutting out Alabama A&M in the first game (5-0) before dropping a 6-2 decision to Jacksonville. With the split, the Bucs improve to 3-5 on the season and 3-1 in Jacksonville, Fla.

The Bulldogs threatened to score in the top of the third inning with two singles, placing runners on second and third with two away. However, Dyson dug in and struck out the inning-ending batter to stop Alabama A&M from getting on the board.

The Bucs capitalized on the momentum, scoring three runs in the bottom of third inning on four hits. With runners on first and second and one away, freshman Lili Bowen (Charlotte, N.C.) singled to center field for the game’s first run, bringing home Julia Fritz (Glen Allen, Va.) from second. The very next batter, Andrea Sarhatt (Knoxville, Tenn.) belted a double to left field to plate Makenna Helton (Knoxville, Tenn.) for the 2-0 lead. The final run of the inning was on the ensuing at bat as Bowen scored from third following a wild pitch.

Dyson slammed the door shut on the Bulldogs over the final four innings, striking out four batters and allowing just one baserunner.

Bowen accounted for the final two ETSU runs in the fifth inning with a two-run double to right field, bringing home Nikki Grupp (Jacksonville, Fla.) and Fritz for the 5-0 victory.

Stat of the Game
Dyson turned in a career-game, pitching a career-best seven innings of work and recording her third collegiate complete game. Dyson also struck out six batters, tying a career high.

Notables
» Bowen recorded her second collegiate multi-hit game, while tallying her first career multi-RBI game with three RBIs in the win over the Bulldogs.
» Six players hit safely in the win over Alabama A&M, including Kelly Warren (Mechanicsville, Va.) who has now hit safely in seven consecutive games to start the season.
» Sarhatt tallied her first career multi-hit game in the win, finishing 2-of-3 from the dish.
» Fritz tied her career-high mark of consecutive games with a base hit, reaching safely in six consecutive contests.
» The Bucs are now 5-1 all-time against Alabama A&M, having won four consecutive outings against the Bulldogs.

Game 2: Jacksonville 6, ETSU 2
Jacksonville struck first in the final game of the day, scoring on a fielder’s choice in the first inning. The Dolphins plated two more runs in the second inning off RBI singles and two more in the fourth inning after Buss bashed a two-run home run.

The Bucs scored their only two runs in the sixth inning, beginning with Helton’s RBI double to left field, bringing home Fritz from second. Demi Coleman (Maryville, Tenn.) scored on the next at bat, crossing the plate following a wild pitch to trim the deficit to 5-2.

Jacksonville scored the final run in the bottom of the sixth inning off an RBI single from Buss, stretching the Dolphins lead back to four runs.

Notables
» Kelly Schmidt (Norcross, Ga.) picked up the loss in the second game of the day, throwing six innings of work and allowing six earned runs on 11 hits.
» Bowen, Helton and Lee accounted for the four hits for ETSU in the loss to the Dolphins.
» Bowen has now hit safely in four consecutive games following her three-hit performance in today’s doubleheader.
» The Bucs fall to 4-15 all-time against Jacksonville following today’s loss.

Up Next
The Bucs will close the 2020 Osprey Dolphin Invite on Sunday with an 11:30 a.m. showdown against the Dolphins. ETSU looks to avenge the 6-2 loss in tomorrow’s battle.