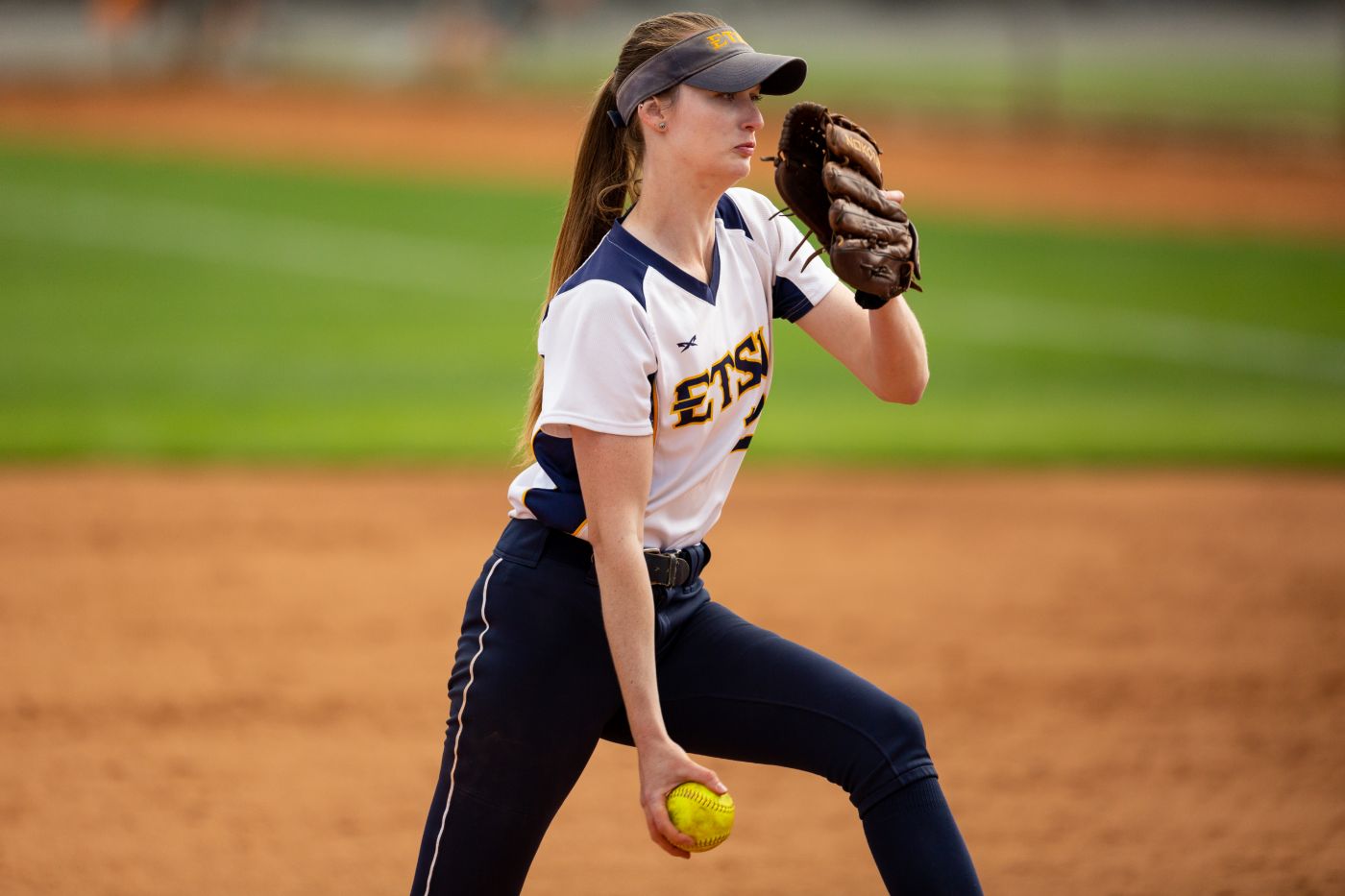 KENNESAW, Ga. (Feb. 22, 2020) – The ETSU Softball team split a Saturday doubleheader at the Bailey Memorial Tournament in Kennesaw, Ga., defeating Rhode Island in the first game by the final score of 4-0. The Bucs then turned around in the afternoon, dropping a 9-1 decision to Marshall. With the split, ETSU improves to 4-9 overall on the campaign.

Game 1: ETSU 4, Rhode Island 0
In a rematch of yesterday’s 2-0 contest, it was the Bucs who came out victorious this time with a shutout of their own. Kelly Schmidt (Norcross, Ga.) tossed a one-hit shutout in the 4-0 victory for ETSU, finishing with a season-high five strikeouts for her first win of the season.

The Bucs broke through the run column in the fourth inning, putting up a four spot with two hits in the inning. After Jayla Shelton (Indianapolis, Ind.) and Kelly Warren (Mechanicsville, Va.) drew back-to-back two-out walks to load the bases, Makenna Helton (Knoxville, Tenn.) made the Rams pay with a double over the center fielder’s head. The transfer junior worked the count to full and laced a rope over center field, clearing the bases for the three-run double. ETSU added to its lead in the very next at bat as Nikki Grupp (Jacksonville, Fla.) dropped in an RBI single short of the right fielder, plating Helton from second for the 4-0 lead.

Stat of the Game
After giving up two runs and seven hits against the Rams on Friday, the Bucs held Rhode Island to just one hit and zero runs scored thanks to a dominating outing from Schmidt.

Notables
» Schmidt picked up her first win of the season after striking out five batters and holding the Rams to a one-hit shutout performance.
» Schmidt’s shutout performance was the first shutout victory this season for the Georgia native and seventh in her career.
» Six different players accounted for the six ETSU hits against the Rams, including the top four batters in the lineup tallying one hit apiece.
» Helton finished the game with three RBIs, her second three-RBI contest of the season and third multi-RBI game of the year.
» With the win, ETSU evens the all-time series against Rhode Island at one win apiece.

Game 2: Marshall 9, ETSU 1 (6 innings)
The Thundering Herd climbed onto the scoreboard in just the second inning after an ETSU throwing error. With a runner on second and nobody out, Grace Chelemen laid down the sacrifice bunt but reached base safely following a throwing error from Grupp, allowing the Herd runner from second to come around and score for the 1-0 lead. Marshall later extended its lead in the top of the fourth inning after a two-out, pinch-hit grand slam by Haleigh Christopher to push The Herd lead to 5-0.

The Bucs scored their lone run in the bottom of the fifth inning after Kylie Toler’s (Bradenton, Fla.) RBI double. Following a hard-hit single by Andrea Sarhatt (Knoxville, Tenn.), Toler brought her home with a double to the right center field, her third RBI of the weekend.

Marshall put the game away for good with four more runs in the top half of the sixth inning, doing so on five hits, including a three-run double by Blakely Burch.

Stat of the Game
The Bucs walked eight batters in the loss to The Herd and plunked one, granting nine free bases in the game. In yesterday’s contest against Marshall, ETSU allowed only two free passes.

Notables
» Warren led the Bucs in hitting, finishing 2-of-3 at the dish.
» Grupp, Sarhatt and Toler accounted for the other three Buccaneer hits in the night cap.
» Toler has now hit safely in all three games she has played in the tournament, holding a 4-for-8 mark with three RBIs and one run scored.
» ETSU now falls to 1-6 all-time against the Thundering Herd following today’s 9-1 loss.

Up Next
The Bucs will close out the Bailey Memorial Tournament on Sunday by squaring off with the host, Kennesaw State, at 2:30 p.m. at Bailey Park.