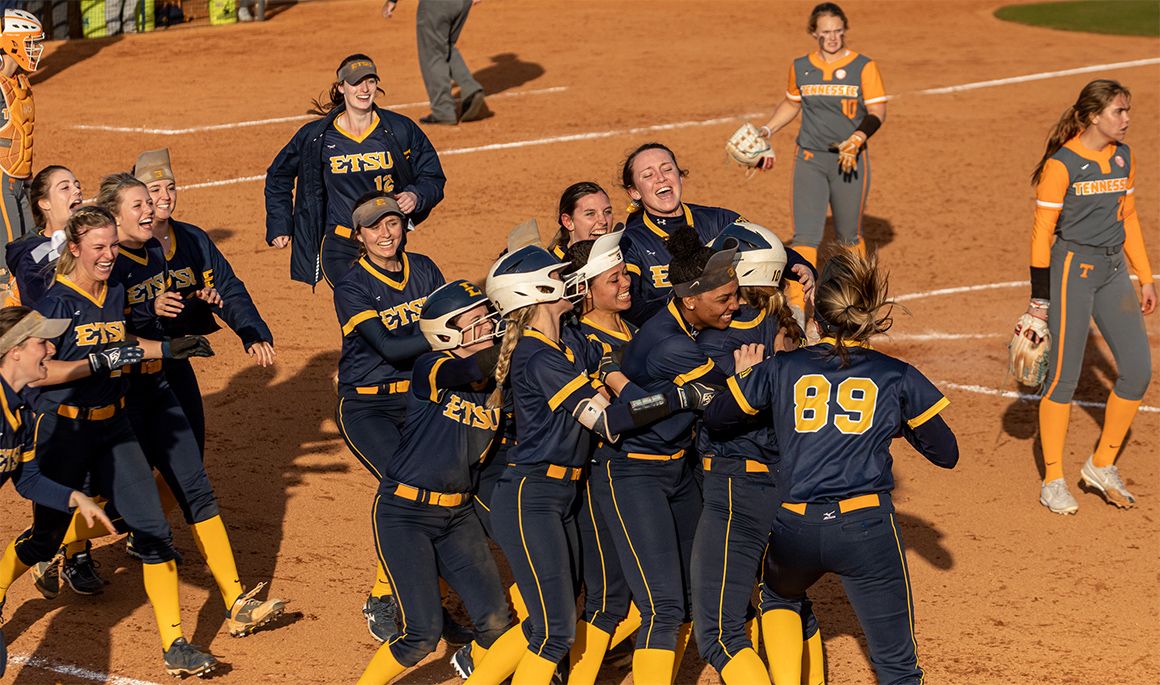 Bucs down Tennessee Tech and topple No. 20 Tennessee

JOHNSON CITY, Tenn. (March 1, 2020) – The opening day of the 2020 Buccaneer Classic will forever be etched into the history books for ETSU Softball as the Bucs defeated Tennessee Tech and then turned around to upset No. 20 Tennessee for the first time in program history. The Bucs began the tournament with a 10-1 victory over the Golden Eagles in six innings, picking up the first run-rule victory for the Bucs this season. ETSU then picked up a historic win over the Lady Vols, walking off in style with a 4-3 victory to cap off a perfect Sunday afternoon at Betty Basler Field. With the pair of wins, ETSU improves to 6-10 on the season.

ETSU evened the game at one apiece in the home half of the fourth inning as Nikki Grupp (Jacksonville, Fla.) laced a single to left field, bringing home Makenna Helton (Knoxville, Tenn.) who led the inning off with a triple.

The Bucs’ offense exploded in the bottom of the fifth inning, scoring six runs on four hits to take the commanding 7-1 lead. Freshman outfielder, Lili Bowen (Charlotte, N.C.), provided the go-ahead run with an absolute moon shot over the left field fence for the 2-1 lead, following her second career home run. Three batters later, Kelly Warren (Mechanicsville, Va.) doubled the ETSU lead to 3-1 with a single up the middle to plate Andrea Sarhatt (Knoxville, Tenn.). Things got out of hand for Tennessee Tech after back-to-back walks loaded the bases for Kylie Toler (Bradenton, Fla.). The senior catcher did not miss the opportunity to tack on to the lead, blasting her second home run of the season and clearing the bases for a 7-1 lead.

After Kelly Schmidt (Norcross, Ga.) pitched out of a jam in the sixth inning, the Bucs put the nail in the coffin with three more runs on two hits. Sarhatt plated the first run with an RBI double, bringing home Julia Fritz (Glen Allen, Va.) for the 8-1 lead. After Warren drew a one-out walk, Helton delivered with her second triple of the game, clearing the bases and providing the Bucs with the 10-1 victory in six innings.

Stat of the Game
The Bucs collected 11 hits in the tournament-opening win, plating 10 runs in the process. The 11 hits marked a season high for ETSU and the 10 runs tied a season high set against North Florida in a 10-6 victory.

Notables
» Schmidt earned her second consecutive win, throwing six complete innings, allowing one unearned run on six hits.
» Sarhatt’s bat has come to life for the Bucs as of late as the sophomore outfielder tallied a career high three base knocks in the win over the Golden Eagles.
» Three different players tallied multi-hit ball games, including Toler who finished with two hits and career high four RBIs.
» The Bucs earned their first run-rule victory of the season, doing so in six innings of play.
» With the win, the Bucs pick up their 10th victory against Tennessee Tech in program history, improving to 10-19.

Game 2: ETSU 4, #20 Tennessee 3
The game that will live on in Buccaneer history couldn’t have begun better for the Bucs, who never trailed in the ball game. Grupp delivered for ETSU in the home half of the first inning following a 1-2-3 inning in the field. The Florida native hit a soft single to shortstop and beat out the play, sending Fritz home from third for the two-out RBI. Toler carried her momentum from game one and collected a two-run double that landed in fair territory down the right field line. The Florida catcher’s double extended the Bucs’ lead to 3-0. ETSU had only scored three runs in four of the 19 games coming into Sunday’s battle.

The Lady Vols answered the early runs with three runs of their own in the top of the third inning beginning with a sacrifice fly in foul territory in left field. The very next at bat saw the 20th-ranked team tie the contest with a two-run homer to left field.

Tennessee threatened again in the top half of the fifth inning, loading the bases with just one out. Fritz, who was pitching in relief of MacKenzie Dyson (Hanahan, S.C.), was able to get out of the jam following a strikeout and ground out that ignited the home crowd. Fritz delivered again in the seventh inning, striking out a Lady Vols batter to end the inning and strand the go-ahead run on third base.

The ETSU bats had been stymied heading into the seventh inning, being held hitless since the first inning. That changed when Lauren Lee (Cleveland, Tenn.) led the inning off with a single up the middle for the Bucs’ fourth hit of the game. Following a hit batter, Bowen moved the runners to second and third with a ground out to the pitcher. Tennessee elected to pitch to Fritz and the junior utility player made the Lady Vols regret their decision. Working the count, Fritz put the seventh pitch of the at bat in play and the rest is history. The ball was hit sharply up the middle and past the Tennessee infielders, bringing home Lee from third for the 4-3 victory and the first win against a ranked opponent in program history.

Stat of the Game
The Bucs held the Lady Vols to just three runs on six hits and ended a dominating run of victories against in-state opponents for Tennessee, snapping the streak at an even 100.

Notables
» The Bucs threw all the stats out the window on Sunday and went toe-to-toe with the most historic program in the state, ending a run of 100 consecutive victories against in-state opponents following ETSU’s 4-3 win.
» The Bucs were 0-19 against the Lady Vols coming into the game and were being outscored 164-16 in the series before the monumental win on Sunday in front of the home crowd.
» The Bucs never trailed against Tennessee and scored four runs against the Lady Vols for the first time in program history, ultimately leading to the biggest regular-season win in program history.
» Five different Bucs tallied one hit, including Toler’s two-run double and Fritz’s walk off single.
» Dyson started the game for the Bucs and threw 3.1 innings of work and allowed three runs on one hit.
» Fritz ended the game in the circle, picking up her first collegiate win after throwing 3.2 innings of work and allowing zero runs on five hits and striking out two batters.

Up Next
ETSU will conclude the 2020 Buccaneer Classic on Monday, March 2 with a twin bill against Bowling Green at 10 a.m. and Tennessee Tech at 2 p.m.