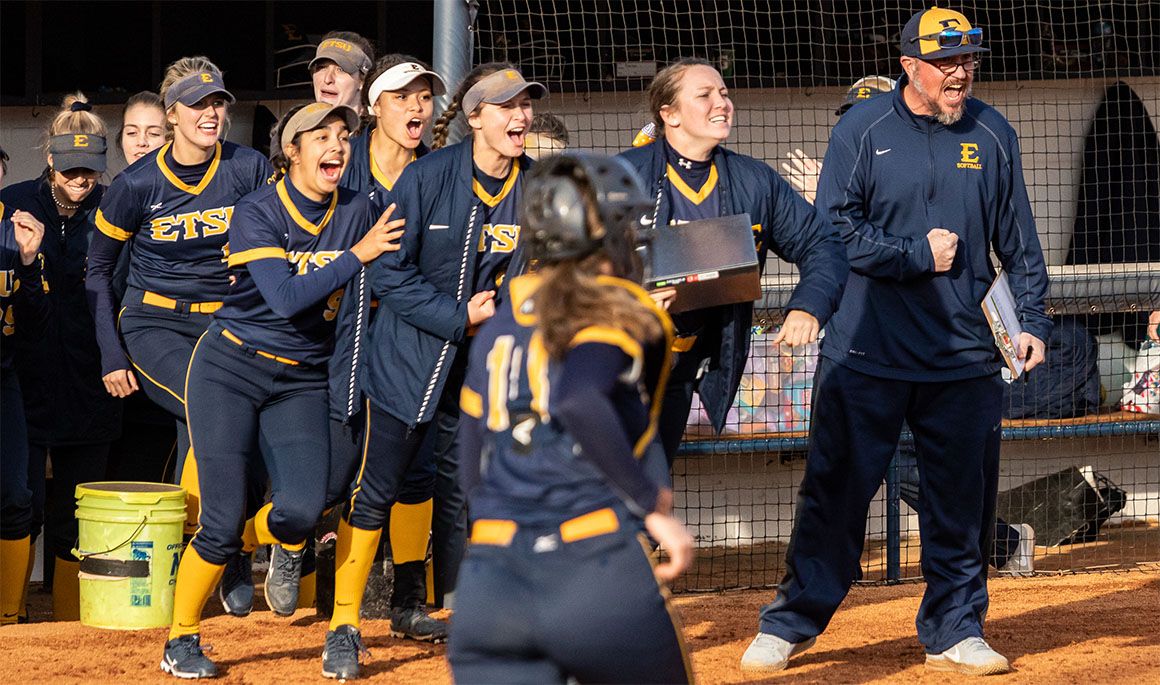 Bucs to take on trio of opponents in Knoxville

KNOXVILLE, Tenn. (March 5, 2020) – Following an undefeated weekend in the 2020 Buccaneer Classic, the ETSU softball team will travel to Knoxville, Tenn. this weekend for the Tennessee Invitational. The Bucs will begin play on Friday at 10 a.m. against Toledo, followed by a 3 p.m. rematch against the Lady Vols. ETSU will then square off with Stanford on Saturday at 10 a.m. before beginning the bracket play of the Tennessee Invitational.

SoCon Recognition
Kylie Toler (Bradenton, Fla.) earned her first career Southern Conference Player of the Week honors for her performance in the 2020 Buccaneer Classic. During the tournament, Toler batted 4-of-8 (.500) with three of her four hits going for extra bases. Toler concluded the events with two home runs, resulting in seven RBIs in two swings with her first career grand slam in a 10-1 win over Tennessee Tech. The senior catcher laced a two-run double in the first inning against the Lady Vols in arguably the biggest win in program history. Toler capped off the 2020 Buccaneer Classic with a three-run homer against Bowling Green for ETSU’s lone hit in the ball game. Toler’s efforts aided the Bucs in finishing 3-0 in their home tournament.

Well That is a First
Each win this weekend provided a confidence booster to the young ETSU unit. However, none were bigger than the second game of the tournament when the Bucs took down then-ranked No. 20 Lady Vols by the final score of 4-3. The Bucs never trailed in the game, jumping out to a 3-0 lead in the first inning. Tennessee tied the game up in the third inning but ETSU had the final say with a walk off single in the bottom of the seventh. The Bucs snapped a 19-game losing skid to the Lady Vols, defeating the in-state opponent for the first time in school history. Speaking of in-state, ETSU’s win snapped a 100-game in-state winning streak for the Lady Vols and also concluded a streak of 1,045 consecutive games ranked inside the Top 25 as Tennessee has now fallen out of the rankings.

No Fly Zone
The Rockets will be the first opponent on the schedule for the Bucs this weekend. Toledo is 9-4 on the season, entering the weekend on a similar three-game winning streak. The Rockets finished 4-1 at the UNCW Softball Invitational this past weekend in Wilmington, N.C. Leah Munson leads the team in batting as the freshman infielder is hitting .372 with 16 base knocks and three RBIs. Three different players have two home runs, with Dayna Denner leading the squad in runs batted in (12). Erin Hunt is the story in the circle as the junior ace has thrown nearly 33 more innings of work than her next teammate. Hunt has appeared in nine games and is 7-0 in the circle, throwing 51.2 innings of work and is boasting an ERA of 0.95. Hunt has struck out 68 batters and walked only eight, while yielding just seven runs and holding opponents to a .174 batting average.

Volunteer at Own Risk
The Lady Vols saw three impressive streaks come to an end the last time they met the Bucs. ETSU defeated Tennessee (4-3) on Sunday, March 1 at Betty Basler Field in Johnson City, Tenn. The rematch is scheduled for 3 p.m. on Friday as the Bucs now look to win in Knoxville for the first time in program history. Standing in the way is a Lady Vols team that has now dropped out of the rankings for the first time in 1,045 games, led by Chelsea Seggern with a .419 batting average. The Lady Vols display a lot of power with 15 homers already this season. The last time that ETSU took on Tennessee, Ally Shipman went yard for her first long ball of the season. Callie Turner is the go-to pitcher for the co-head coaches, posting a 2.81 ERA in 13 appearances with a 7-5 record. Turner has struck out 49 batters in 67.1 innings of work and is holding opponents to a .232 batting average.

Heading into the rematch, the Bucs are 1-19 all-time against Tennessee following the monumental win on March 1.

Not the Right Card
The Cardinal are the final opponent for the Bucs in the Tennessee Invitational, entering the weekend with an 18-3 overall record and receiving votes in the latest NFCA Top 25 Coaches Poll. Stanford most recently held its own tournament in the Demarini Invitational, finishing 5-0 in the event and run-ruling each opponent it faced. The Cardinal outscored their opponents 47-5 in the most recent tournament. Hannah Howell leads the team in batting with a .444 average with 20 hits in 45 appearances. Six different players are batting over .300 for Stanford, including Kaitlyn Lim who leads the team in homers (3) and is second in runs batted in (17). Tatum Boyd and Alana Vawter are the go-to pitchers for Stanford, combining for a 13-0 record in 23 combined appearances. Boyd has pitched 48.1 innings of work and holds a 0.72 ERA, striking out 25 batters and allowing just five earned runs. Vawter is 7-0 to lead the team and has a 1.13 ERA in 43.1 innings of work with 37 strikeouts and a .194 opposing batting average.

The Bucs and Cardinal will square off on Saturday at 10 a.m. for the first time in program history.