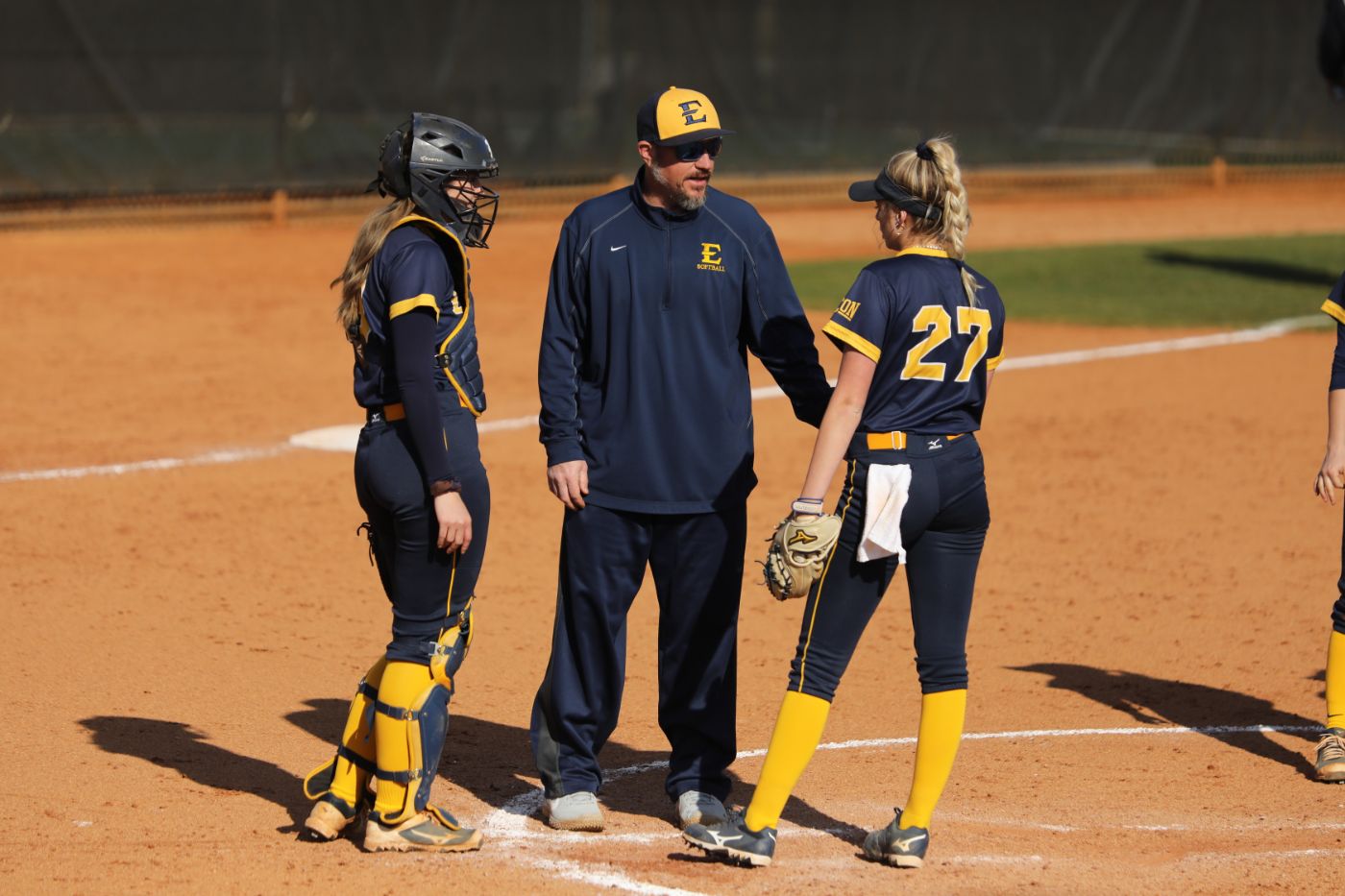 KNOXVILLE, Tenn. (March 7, 2020) – The ETSU Softball team couldn’t keep its mojo as of late, dropping a pair of contests in Knoxville, Tenn. on Saturday in the Tennessee Invitational at Sherri Parker Lee Stadium. The Bucs began the day with a narrow 5-3 loss to Stanford, nearly ending The Cardinal undefeated weekend. ETSU then had to wait nearly seven hours to begin their night cap against Tennessee in which they dropped a 10-2 decision to the Lady Vols. With the pair of losses, ETSU falls to 8-13 on the year.

Game 1: Stanford 5, ETSU 3
ETSU jumped out to a quick start, scoring the game’s first run in the top half of the first inning. With bases loaded and two away, Kylie Toler (Bradenton, Fla.) came through with her team-leading 15th RBI after a line drive through the right side of the infield plated Julia Fritz (Glen Allen, Va.) from third.

The Bucs came up clutch on the defensive side of the ball in the first and second inning, stranding a total of four runners on base in the first two innings. ETSU’s Kelly Warren (Mechanicsville, Va.) ended the first inning with a diving catch to strand a runner at third, followed by a harmless fly out to end the second inning. ETSU used the momentum to double its lead in the top of the third frame after back-to-back doubles from Makenna Helton (Knoxville, Tenn.) and Nikki Grupp (Jacksonville, Fla.) extended the Blue & Gold lead to 2-0.

Stanford’s bats woke up in the bottom of the third inning, registering three consecutive singles to trim the ETSU lead in half, 2-1. The Cardinal would go on to score two more runs in the inning to take the 3-2 lead.

The Bucs clawed back to even the game in the sixth inning, thanks to some defensive blunders by the Stanford unit. Helton and Grupp led the inning off with a single but were aided by two errors on the second base knock, allowing Helton to score from second and Grupp to trot into third with the game knotted at 3-3. Toler then drew a walk on the 15th pitch of the at bat to put runners on the corners and nobody out. However, the Cardinal robbed the Bucs of the go-ahead run after Demi Coleman (Maryville, Tenn.) laced a sharp line drive just inside the reach of the Stanford shortstop. The final two batters struck out to end the scoring threat for the Buccaneers.

The Cardinal reclaimed the lead for good in the bottom of the sixth inning after an ETSU fielding error enabled Stanford to have another two-out at bat. With runners on second and third and the score all square at three apiece, Taylor Gindlesperger collected the game-winning at bat with a two-run triple to right center to put Stanford on top 5-3.

Stat of the Game
The top of the order proved really efficient for the Bucs in game one of Saturday’s doubleheader as four of the top five players in the lineup accounted for the eight hits and three runs.

Notables
» Despite the loss, the Bucs outhit Stanford with runners in scoring position, finishing 3-of-9 while Stanford concluded the game 3-of-10.
» Both teams left seven runners on base as both pitching units were able to work around scoring threats.
» Warren, Helton and Grupp each accounted for two hits apiece to lead all batters for the Bucs.
» Kelly Schmidt (Norcross, Ga.) started the game in the circle for the Bucs, throwing five innings of work and allowing four runs, three earned.
» Fritz entered the game in relief and surrendered one unearned run in one inning of work for the Bucs.
» ETSU drops the first-ever meeting with Stanford, falling to 8-12 overall on the season.

Game 2: Tennessee 10, ETSU 2 (5 innings)
The Lady Vols quickly ignited the home crowd in the first inning, scoring four runs on five hits for the early advantage, highlighted by a two-run single off the bat of Cailin Hannon.

The Bucs cut into the lead in the next inning despite not tallying a base hit. Nikki Grupp scored from second following a fielder’s choice ground out and an errant throw above the ETSU dugout, safely sliding into home for the Bucs’ first run of the game.

Tennessee tacked on three more runs in the home half of the second inning, scoring all three runs on four hits, including a pair of RBI singles to stretch its lead to 7-1.

ETSU scored its final run in the very next frame, doing so off yet another ground out, this time off the bat of Makenna Helton. The Tennessee native plated her 13th RBI of the season, bringing home Julia Fritz for the Bucs’ second run of the ball game.

The Lady Vols scored one run in the bottom of the third, fourth and fifth inning to cap off the 10-2 victory in favor of the home team.

Stat of the Game
The Lady Vols proved to be tough outs in tonight’s contest, tallying 15 total hits which is the second-most hits given up this season for ETSU. With the 15 hits, Tennessee scored 10 runs, crossing the plate at least once in each inning.

Notables
» Andrea Sarhatt (Knoxville, Tenn.) led the Bucs in batting, finishing 2-of-3 at the dish…Fritz and Jordan Durbin (Mechanicsville, Va.) tallied the final two hits.
» Three different pitchers threw in the final game of the day with Fritz being hit with the loss after allowing three earned runs in the first inning.
» The Bucs have now dropped three consecutive games, all coming at the Tennessee Invitational.

Up Next
ETSU will close out its involvement in the 2020 Tennessee Invitational with a 9:30 a.m. battle with Toledo at Lee Stadium. The Bucs look to repeat their success against the Rockets, besting Toledo by the final of 3-2 in game one of the tournament. ETSU will serve as the home team since it is the higher seed of the two teams.