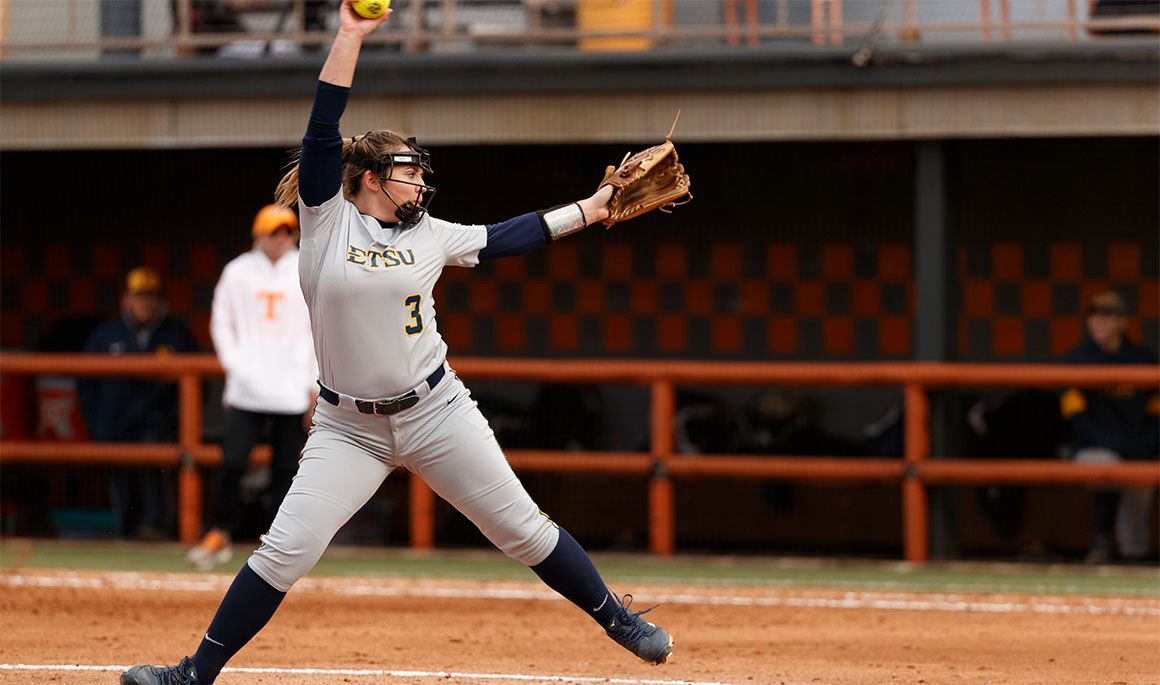 SPARTANBURG, S.C. (Feb. 27, 2021) – The ETSU Buccaneer Softball squad began the 2021 Wing ETC. Classic with a doubleheader split in Spartanburg, S.C. The Bucs began the tournament with a 6-1 loss to USC Upstate, followed by an 8-0 victory over South Carolina State. With the split, ETSU improves to 2-2 on the young campaign.

Game 1: USC Upstate 6, ETSU 1
The Bucs jumped on the board first with an RBI double down the left field line in the top of the third inning. The go-ahead base knock came off the bat of Kelly Warren (Mechanicsville, Va.), plating Kasidy Dunn (Friendsville, Tenn.) for the early 1-0 advantage.

The Spartans pulled even with ETSU in the bottom half of the third with an RBI double of their own. USC Upstate’s RBI double kickstarted the Spartans’ offense, scoring two more runs in the bottom of the fourth inning for the 3-1 lead.

The Bucs had a chance to cut into the deficit in the top half of the sixth inning with bases loaded and two outs. However, on the ensuing at bat, Kylie Toler (Bradenton, Fla.) harmlessly fouled out down the left field line to end the ETSU threat.

USC Upstate put the game away with three runs on three hits and one Buccaneer error in the bottom half of the sixth, securing the eventual 6-1 triumph.

Stat of the Game
Two of the five ETSU hits were extra-base knocks, including Lauren Lee’s (Cleveland, Tenn.) fourth career triple. Lee has now tallied one triple in each of her four seasons.

Notables
» Lauren Lee extended her hitting streak to four games, tying a career high for the senior infielder.
» Kelly Schmidt (Norcross, Ga.) pitched five innings of work with four runs, three earned, while collecting three strikeouts in her first loss of the season.
» The Bucs are now 4-20 all-time against USC Upstate, including 1-13 when playing the Spartans in Spartanburg.

Game 2: ETSU 8, South Carolina State 0 (five innings)
The Bucs picked up their first run-rule victory of the season in game two, defeating the Bulldogs by the final of 8-0. Despite leaving the bases loaded in the opening inning, ETSU quickly jumped on the board in the second inning. The Blue & Gold struck first following Faith Adam’s (Henrico, Va.) first career RBI with a double. After Adams was thrown out trying to stretch a double into a triple, the Bucs blasted their first home run of the tournament with a solo shot off the bat of Lilly Holston (Powell, Tenn.). Holston cranked her first home run in her first collegiate at bat, garnering the start in the outfield in game two.

The Bucs kicked off the third inning with another solo shot, this time from veteran third baseman, Nikki Grupp (Jacksonville, Fla.). Grupp’s second homer of the season pushed the ETSU lead to 3-0.

ETSU put the game away in the top half of the fifth inning, scoring five runs on three hits and one Bulldog error. Lili Bowen (Charlotte, N.C.) kicked off the fifth-inning onslaught with an RBI single through the left side of the infield. Three batters later, Holston cleared the bases with a three-run single for the 7-0 edge. Julia Fritz (Glen Allen, Va.) enforced the potential run rule with an RBI double in the next at bat, her first RBI of the season.

Taylor Boling (Jasper, Ga.) put the game away in the bottom of the fifth inning, striking out two of the four batters she faced in the final inning. Boling secured her first win of the season following her three-hit shutout.

Stat of the Game
The Bucs put together eight runs on nine hits during the victory, including three hits and three RBIs off the bat of newcomers Faith Adams and Lilly Holston.

Notables
» Taylor Boling delivered a gem in game two of the tournament, earning the win after throwing her 13th career complete game and first career shutout victory.
» Seven of the nine batters for the Bucs collected hits in the victory.
» ETSU belted two homers in game two, marking the first game since March 1, 2020 that the Bucs blasted two long balls in the same game.
» Lauren Lee extended her hitting streak to a career-best five games, while also tying her career-high for reached-base streaks with five consecutive games.

Up Next
ETSU will close out the Wings ETC. Classic tomorrow with another doubleheader, beginning with South Carolina State at 11 a.m. The Bucs will conclude the event with a 3:30 p.m. showdown against USC Upstate.