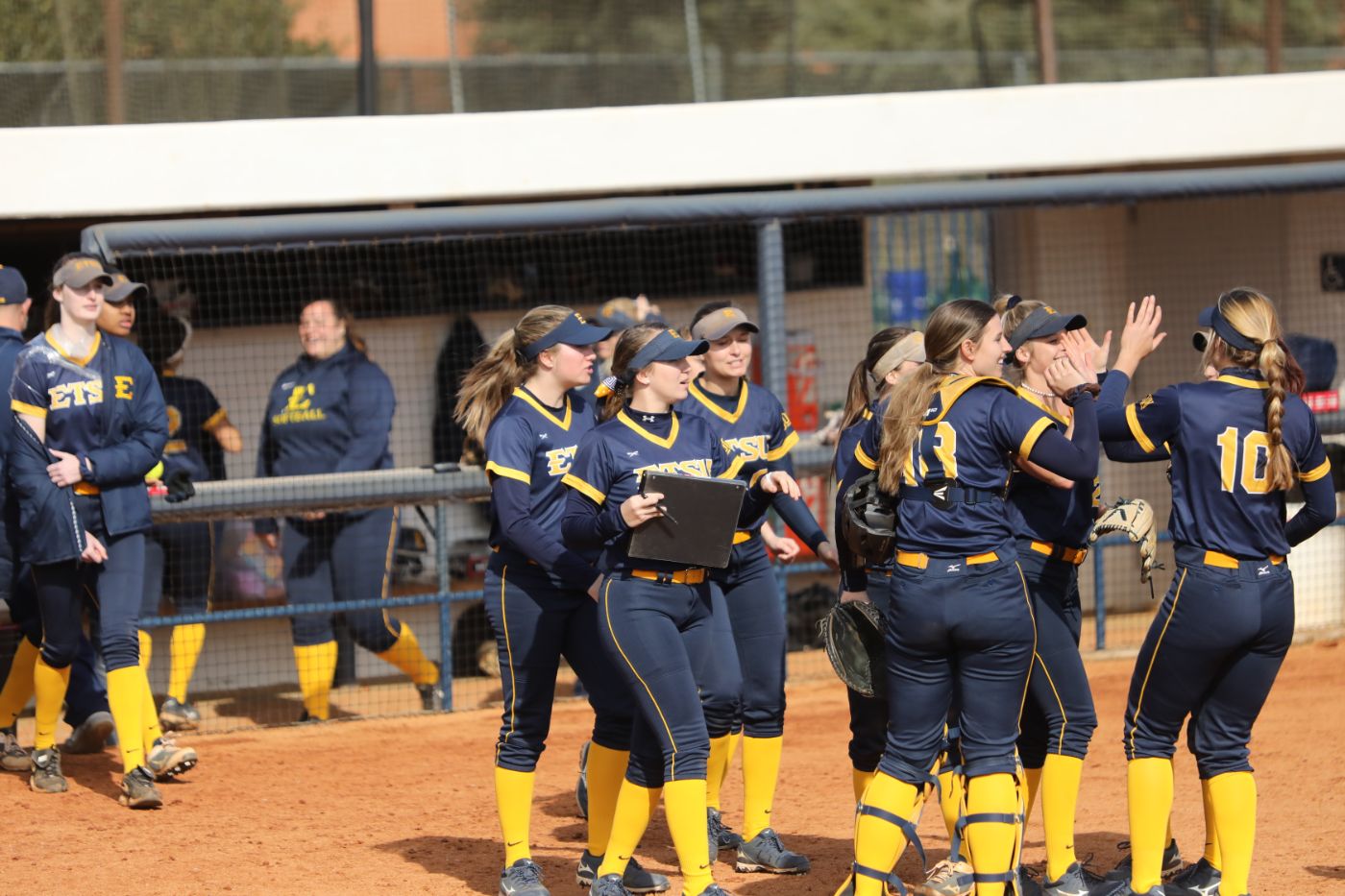 SPARTANBURG, S.C. (Feb. 28, 2021) – The ETSU Buccaneer Softball squad put their stamp on the final day of the Wings ETC. Classic with a pair of convincing wins, including the tournament finale against USC Upstate. The Bucs toppled South Carolina State, 8-0, before putting together a 5-3 victory over the host Spartans. With the pair of wins, the Bucs improve to 4-2 on the season.

Game 1: ETSU 8, South Carolina State 0 (five innings)
For the second consecutive game, the Bucs blanked the Bulldogs in five innings, this time doing so as the “home” team. ETSU outhit South Carolina State, 12-2, en route to the lopsided victory. The Bucs jumped on board in the first inning after an RBI single by Nikki Grupp (Jacksonville, Fla.), setting the tone early.

The Blue & Gold extended the lead to 3-0 in the bottom half of the second inning with a pair of RBI doubles from Kylie Toler (Bradenton, Fla.) and Julia Fritz (Glen Allen, Va.).

ETSU broke the game wide open in the bottom of the third inning, scoring four runs on five hits. Toler began the third-inning onslaught with an RBI double, her second of the game. Lilly Holston (Powell, Tenn.) brought Toler home in the next at bat with a double of her own. Kelly Warren (Mechanicsville, Va.) and Alana Collins (Greeneville, Tenn.) were responsible for the other two Buccaneer runs, extending the ETSU lead to 7-0.

The Bulldogs tallied their first of two base hits with two outs in the fifth inning, putting an end to Kelly Schmidt’s (Norcross, Ga.) perfect game. Schmidt slammed the door shut on the potential threat, turning the page to the bottom half of the inning.

Toler ended the game in the bottom of the fifth with one swing of the bat, launching her first home run of the season to deep left field. Toler’s solo blast enforced the run rule for the second consecutive contest, ensuring the 8-0 triumph for ETSU.

Stat of the Game
After going hitless in her first two games of the season, Kylie Toler rebounded with a dominating 3-for-3 performance with three runs batted in. All three of Toler’s base hits were extra-base knocks, while marking the most hits in a single game in Toler’s collegiate career.

Notables
» Schmidt was dominate in the circle, improving to 2-1 on the season, following a two-hit, four strikeout performance.
» With the win, Schmidt jumps into a four-way tie for most wins in ETSU history (20), while sliding into a two-way tie for most career shutouts (8).
» All nine batters tallied at least one base hit in the victory, with Toler and Fritz recording multi-hit performances.
» ETSU improves to 4-1 all-time against South Carolina State following the two victories in Spartanburg this weekend.
» With the loss to the Bucs, the Bulldogs run their winless streak to 51 consecutive games, having been run-ruled in 36 of those outings.

Game 2: ETSU 5, USC Upstate 3
ETSU quickly jumped on the scoreboard to take the early 2-0 advantage after Andrea Sarhatt (Knoxville, Tenn.) laced a two-run single up the middle to bring home Grupp and Collins.

The Spartans knotted the game back at two apiece in the bottom of the first inning after a two-run blast from Peyton Darnell to shift the momentum.

Both offenses stalled until the sixth inning when the Bucs took the lead for good after Holston scored the go-ahead run after a Spartan error, giving the Bucs the 2-1 advantage. The very next inning, the Bucs loaded the bases with nobody out for a chance to build their lead. ETSU pushed across two more runs after an RBI ground out by Lauren Lee (Cleveland, Tenn.) and another error by USC Upstate.

The Spartans did not go away quietly, loading the bases with nobody out, trailing by three runs. However, Taylor Boling (Jasper, Ga.) buckled down and allowed just one run on a fielder’s choice, preserving the 5-3 victory for the Blue & Gold.

Stat of the Game
The Bucs scored two runs on USC Upstate blunders, as both runs proved to be costly for the home squad. Both units combined for four errors in the tournament finale.

Notables
» MacKenzie Dyson picked up her first win of the season, hurling five innings of work and allowing two runs on seven hits with one strikeout.
» Taylor Boling picked up her first save of the season, running her career total to seven which ties her with Courtney Jenkins for the most saves in ETSU Softball history.
» Collins and Grupp each notched two base hits, while four other Bucs recorded the remaining four base knocks.
» Both teams combined to leave 23 runners on base, with the 10 runners left on base by the Bucs marking their new season high.
» The Bucs improve to 5-20 all-time against the Spartans, including 2-13 when playing in Spartanburg. The win today was the first ETSU victory in the series since April 24, 2013.

Up Next
The Bucs will travel back to South Carolina on Friday, March 5, this time making a trip to Clinton, S.C. ETSU will prepare to square off with the Presbyterian Blue Hose in a three-game series with a doubleheader on Friday, March 5 and series finale on Saturday, March 6.