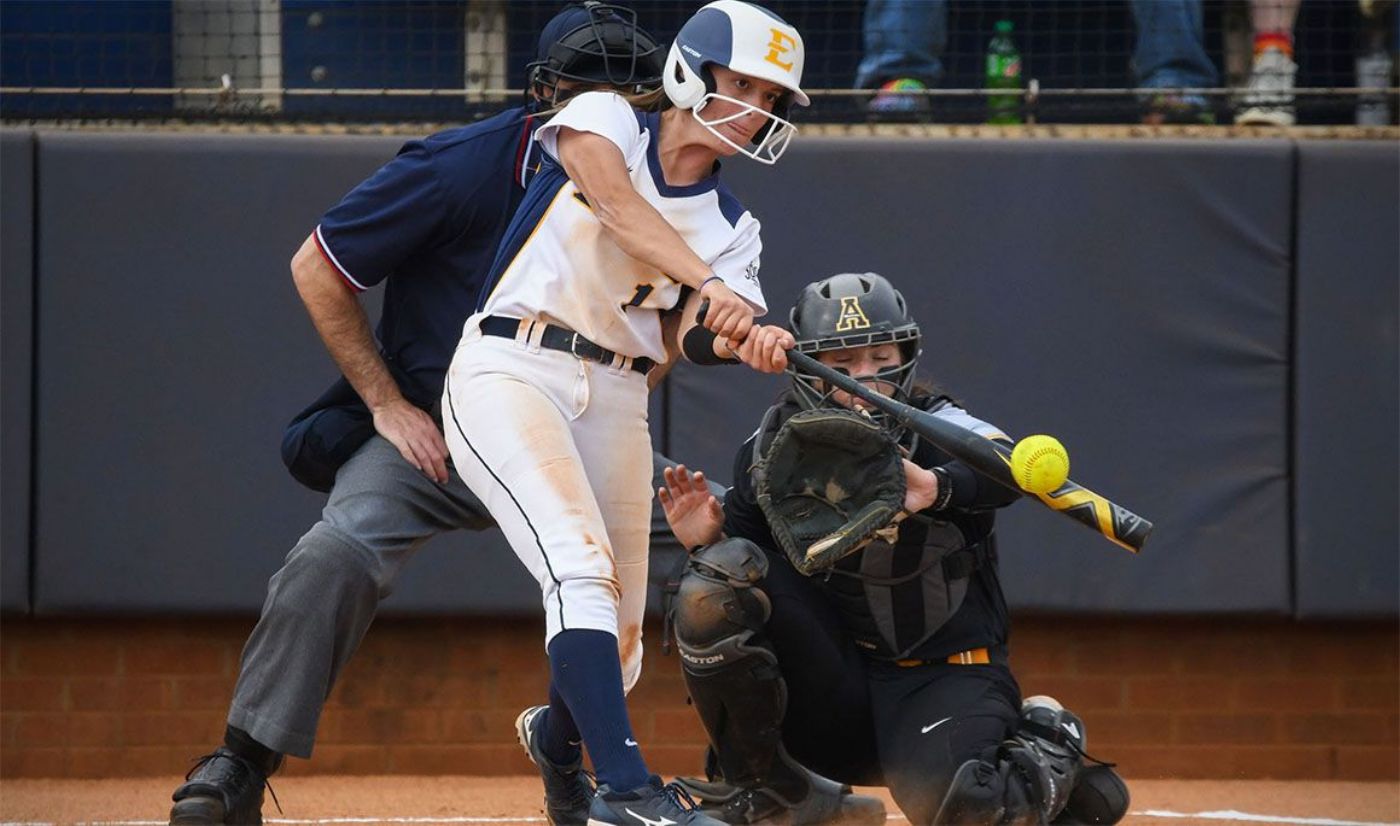 ETSU claims game one over Mountaineers, falls in game two

JOHNSON CITY, Tenn. (March 9, 2021) – In what feels like weeks since their last contest, the ETSU Softball squad shook off the rust in a midweek doubleheader with Appalachian State at Betty Basler Field in Johnson City, Tenn. The Bucs claimed game one over the visiting Mountaineers, before dropping the second contest in the Tuesday tilt. With the split, ETSU improves its record to 5-3 on the season, while Appalachian State climbs to 11-5.

The one run was all ETSU needed as senior righty Kelly Schmidt (Norcross, Ga.) pitched a gem en route to her third win of the season, including her second complete-game shutout. Schmidt allowed just three hits between the third and sixth inning and received a big boost from Sarhatt who flashed the leather in an acrobatic catch at the fence to rob the Mountaineers of a potential game-tying base hit.

The Bucs carried the momentum from Sarhatt’s catch into the bottom of the sixth inning to plate another run, doubling their lead to two. After Lauren Lee (Cleveland, Tenn.) drew a two-out walk, Kylie Toler (Bradenton, Fla.) laced an RBI double in the right center gap for the 2-0 advantage.

Appalachian State went three up and three down in the final inning as Schmidt slammed the door shut for the Bucs’ fifth win of the season.

Stat of the Game
Kelly Schmidt threw her second complete-game shutout of the campaign, allowing just four hits and punching out five batters for her third win of the season.

Notables
» Sarhatt was responsible for two of ETSU’s four hits, pushing her hitting streak to four games and her reach-base streak to a career-best eight games.
» With the win in the circle, Schmidt takes solo sixth in the all-time record book with 21 career wins and solo third for career shutouts with nine.
» Alana Collins (Greeneville, Tenn.) continued her hot start in a Buccaneer uniform, hitting safely for the seventh consecutive game (sixth in an ETSU jersey).
» The 2-0 victory for the Bucs snapped Appalachian State’s five-game winning streak, while improving the all-time record against the Mountaineers to 24-14.
» ETSU picked up its first home win over Appalachian State since April 1, 2009 when the Bucs toppled the Mountaineers by the final of 1-0.

Game 2: Appalachian State 7, ETSU 1
The second game had a much quicker start, this time for the visiting squad. Appalachian State scored the game’s first four runs in two innings, including a three-run homer off the bat of Emma Jones for the 4-0 advantage.

The Bucs plated their lone run in the bottom of the third inning when Julia Fritz (Glen Allen, Va.) went opposite field for a single down the left field line, bringing home Faith Adams (Henrico, Va.) who had reached base following a two-out double.

The Mountaineers grabbed the run back, and then more, in the top half of the fourth after scoring two runs on one hit and one Buccaneer blunder. Appalachian State plated the game’s final run in the fifth inning with a sharp RBI-single to left field for the 7-1 advantage.

Stat of the Game
Appalachian State had the upper hand in the pitching duel in game two as Kenzie Longanecker improved to 6-0 with a seven-strikeout performance, surrendering just two hits and one Buccaneer run.

Notables
» Taylor Boling (Jasper, Ga.) was tagged with her second loss of the season after allowing four runs on 1.2 innings of work.
» MacKenzie Dyson (Hanahan, S.C.) pitched in relief for Boling, allowing three runs (two earned) in 3.0 innings inside the circle.
» The Bucs could only muster three hits in game two, including a leadoff single in the bottom of the seventh off the bat of Collins, pushing her hitting streak to eight games.
» The strike zone seemed to shrink on ETSU in game two as three Buccaneer pitchers combined for a season-high eight walks allowed.

Up Next
ETSU will host the annual Buccaneer Classic this weekend, March 13-14, at Betty Basler Field. The tournament will commence on Saturday and will feature Akron, Bradley and the host Buccaneers.