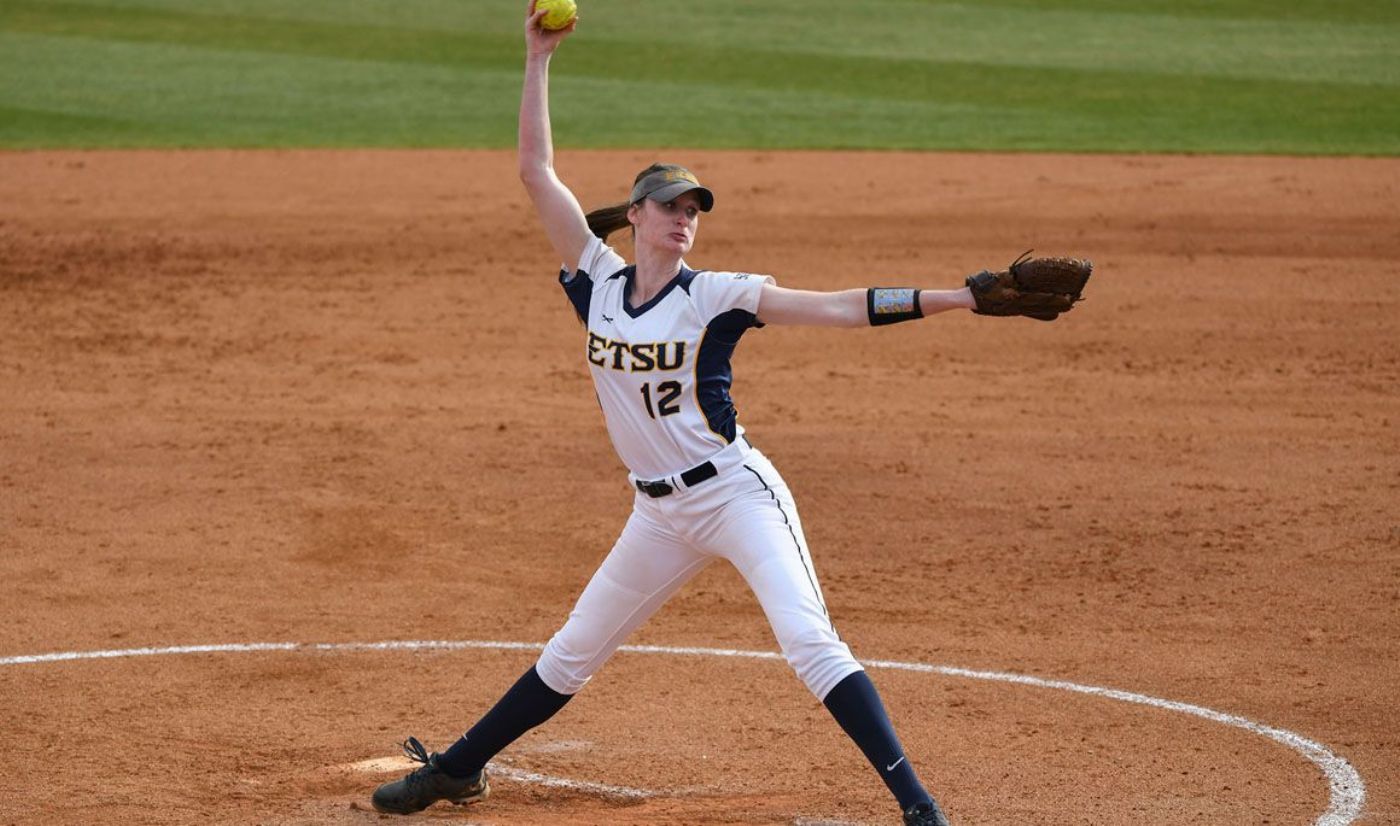 JOHNSON CITY, Tenn. (March 13, 2021) – ETSU senior right-hander Kelly Schmidt (Norcross, Ga.) tossed a two-hit shutout with seven strikeouts, carrying the Bucs to a 4-0 win over Akron in the opener of the Buccaneer Classic; however, the Bucs were unable to finish the sweep as Bradley edged the Blue and Gold 4-3 in the nightcap on Saturday at Betty Basler Field.

With the split, ETSU moved to 6-4 on the season, while the Bucs complete play in their home tournament Sunday afternoon. ETSU hosts Bradley at 1:15 p.m. and faces Akron in the finale at 3:30 p.m.

Game 1: ETSU 4, Akron 0
The Bucs plated runs in the first two innings and Kelly Schmidt kept the Akron hitters at bay as ETSU cruised to a 4-0 win in its first game of the Buccaneer Classic on Saturday.

The first five Akron outs came via the strikeout and the Buccaneer offense gave Schmidt a three-run cushion in the first two innings. In the first, Julia Fritz (Glen Allen, Va.) led off with a double and she came around to score the first run on Kelly Warren’s (Mechanicsville, Va.) RBI single up the middle. Warren’s bat produced the two Buccaneer runs an inning later as her infield single plated Kylie Toler (Bradenton, Fla.) and Alana Collins (Greeneville, Tenn.), making it a 3-0 game. Warren’s lightning speed beat the throw from second baseman Teagan Rice, while first baseman Atlantis Taufa muffed the throw, allowing the ball to get behind her and Collins was able to score from second on the play.

ETSU scratched across its final run in the sixth when Fritz’s two-out RBI single to left brought home Lauren Lee (Cleveland, Tenn.) – who earlier reached on a fielder’s choice – extending the Bucs’ lead to four.

With the loss, Akron dipped to 1-9 on the season.

Stat of the Game
Kelly Schmidt registered her second consecutive shutout, while she faced one over the minimum from the third inning on. Schmidt, who set a season high in strikeouts, didn’t let an Akron runner reach second base after allowing a one-out double in the first inning.

Notables
» A trio of Buccaneer hitters recorded multi-hit games with Julia Fritz, Kelly Warren and Kylie Toler all posting two hits each … Toler reached base in all three plate appearances, going 2-for-2 with a walk and run scored, while Warren went 2-for-3 with two RBI and Fritz generated two hits and the Bucs’ lone extra base-hit of the game.

» Schmidt, who blanked Appalachian State on Tuesday, moved her career total of shutouts to 10.
» Kylie Toler threw out a pair of base runners attempting to steal, marking her first two of the season … Toler has now thrown out 38 runners behind the plate over her career.

Game 2: Bradley 4, ETSU 3
Bradley jumped out to a three-run lead in the fourth inning and held off a late Buccaneer comeback to capture a 4-3 win in the nightcap.

The Braves scored two of their three runs with two outs in the fourth, but ETSU responded with two runs in the bottom half of the inning to pull within a run, 3-2. Lilly Holston (Powell, Tenn.) generated the offense when her hooking single hugged the right field line, scoring Collins from second, while Nikki Grupp (Jacksonville, Fla.) came home all the way from first when Samantha Smith’s throw to the plate was offline. With two outs and the tying run at third, Lauren Lee looked to have connected on the game-tying hit, but second baseman Vick Zaluske snagged the shallow blooper out of the air to end the inning.

Both teams plated a run in the sixth, but after Grupp split the gap in right-center, scoring Warren from first, she was left stranded in scoring position when Andrea Sarhatt (Knoxville, Tenn.) grounded back to the pitcher and Holston struck out swinging, keeping it a 4-3 game in favor of Bradley.

After Bradley left two runners stranded in the top of the seventh, the Bucs were retired in order in the bottom half of the inning, giving Bradley the one-run win.

Notables
» Nikki Grupp accounted for two of ETSU’s five hits, while driving in one and scoring a run.
» ETSU’s 2-thru-4 hitters all scored one run.
» Allison Farr struck out seven and walked one in four innings of work.
» Taylor Boling (Jasper, Ga.) allowed only one run in three innings of relief.

Up Next
The final day of the Buccaneer Classic begins Sunday at 11 a.m. when Akron and Bradley meet. The Bucs will then host Bradley at 1:15 p.m. and wrap up the tournament with Akron at 3:30 p.m.