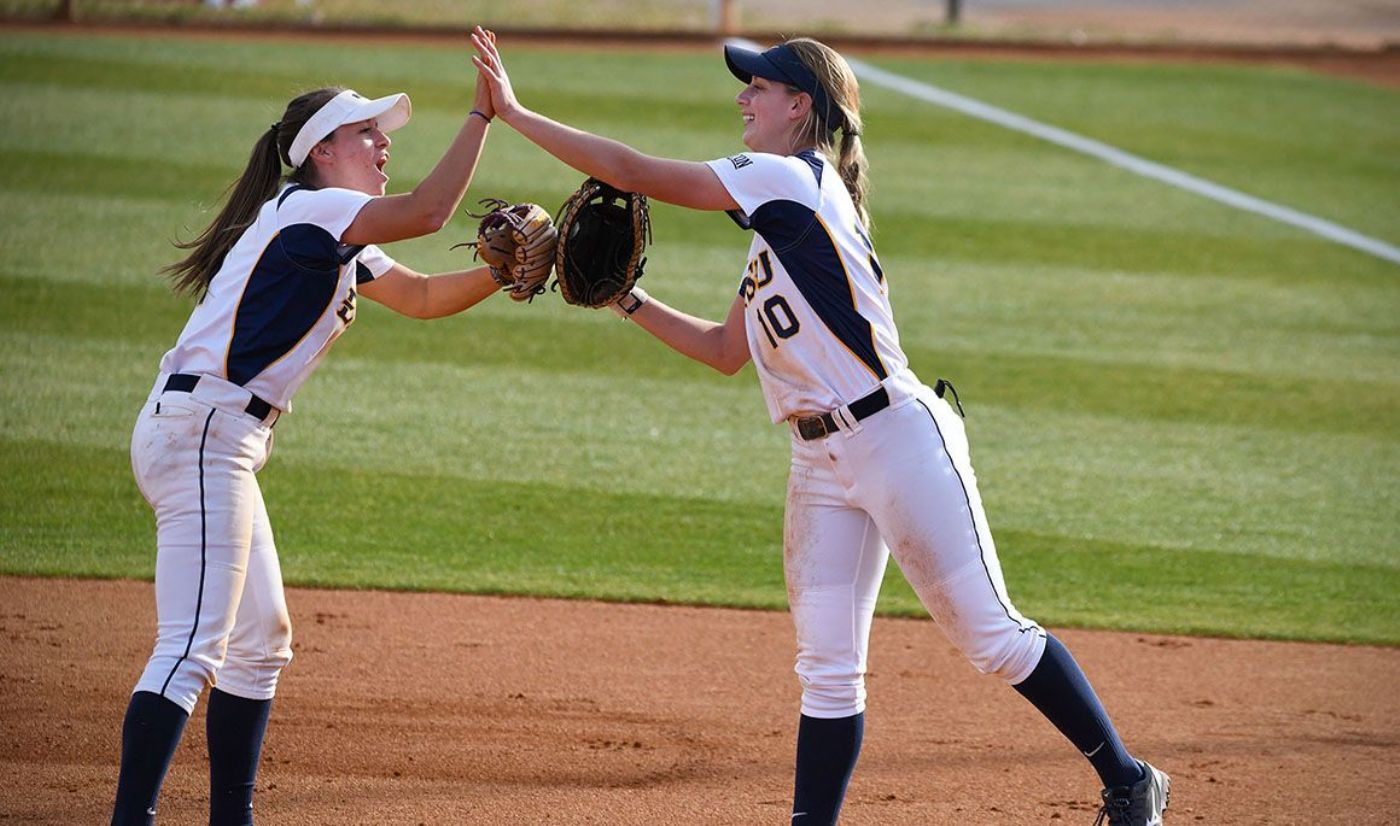 JOHNSON CITY, Tenn. (March 14, 2021) – The ETSU softball team forced a split on day two of the Buccaneer Classic on Sunday as the Buccaneers used an offensive onslaught to zip by Akron, 11-3 in six innings at Betty Basler Field. Earlier in the day, the Blue and Gold fell to Bradley, 4-2.

ETSU improved to 7-5 through the first 12 games of the season, while the Bucs cap off their eight-game homestand Tuesday afternoon against Radford. First pitch of the doubleheader is slated for 3 p.m.

Game 1: Bradley 4, ETSU 2
For the second straight day ETSU was edged by Bradley as the Braves dealt the Blue and Gold a 4-2 setback in the Bucs’ first game on Sunday.

Bradley generated all of its offense in a four-run second inning before the Bucs chipped away with a run in the third and fifth, but ETSU left eight runners stranded and couldn’t complete the comeback.

In the second inning, Bradley began the frame with three straight hits, including two-run scoring double, while Camryn Monteer’s one-out single to center brought in two more runs. Grace French – who drove in a pair of runs with her first double of the season – touched the dish on Monteer’s single and Lucy Mead came around to score on a fielding error by Andrea Sarhatt (Knoxville, Tenn.) in center field, making it 4-0.

ETSU loaded the bases in the third inning, but with the bags full of Bucs and nobody out, the Blue and Gold were only able to muster up one run as Nikki Grupp (Jacksonville, Fla.) scored Julia Fritz (Glen Allen, Va.) on a fielder’s choice ground out to short. With one out and runners on first and second, Lilly Holston (Powell, Tenn.) hit into an inning-ending double play to halt the rally.

Holston redeemed herself two innings later as her two-out RBI single plated Kelly Warren (Mechanicsville, Va.), but with the tying runs aboard, Bradley kept its two-run lead intact when Lauren Lee (Cleveland, Tenn.) hit into a fielder’s choice ground out to shortstop.

Both teams were held scoreless for the final two innings and Bradley escaped with its second win over ETSU in as many days.

Bradley, who held on to beat Akron 6-5 in the first game on Sunday, improved to 7-6.

Stat of the Game
For the second straight game against Bradley, the Bucs had their chances but couldn’t come up with the timely hit. ETSU went 2-for-10 with runners in scoring position and 2-for-15 with runners on base.

Notables
» Kelly Schmidt (Norcross, Ga.) entered the game with back-to-back complete game shutouts, but she suffered the loss after allowing four runs (three earned) on eight hits in seven innings of work ... Schmidt also struck out four and walked three; however, after allowing the four runs in the second, the Buccaneer righty held Bradley scoreless on two hits over the final five frames.

» Julia Fritz and Lilly Holston both registered two-hit games as they accounted for four of ETSU’s six base knocks.
» Bradley’s Camryn Schaller earned the save after holding ETSU to one hit over the final 2.2 innings.

Game 2: ETSU 11, Akron 3 (6 innings)
The Buccaneer bats came alive in the nightcap as they pounded out a season-high 13 hits to zip by Akron, 11-3 in six innings in the finale of the Buccaneer Classic.

After seeing the Zips jump out to a 1-0 lead in the first, ETSU final struck for four runs in the third, added two more in the fourth and ended the game early with a five-run sixth inning to secure the eight-run victory.

Akron took its first lead of the tournament on Lauren Holdsworth’s two-out RBI double to right, but after being held without a hit over the first two innings, ETSU finally got things rolling in the third.

The Bucs scored four runs on five hits in the bottom of the third to grab a 4-1 lead. Julia Fritz started the scoring when she belted an opposite field home run over the fence in left for her first round tripper of the season, while Nikki Grupp, Lili Bowen (Charlotte, N.C.) and Lauren Lee all followed with RBI singles to put the Buccaneers on top for good.

An inning later, ETSU pushed across two more runs when Grupp laced an RBI single to left, while Kylie Toler (Bradenton, Fla.) – who reached via a walk earlier – scored when Bowen was hit by a pitch, making it a 6-1 score.

The Zips tacked on two more runs in the top of the sixth, but ETSU ended it with five runs in the bottom half of the inning. Toler led off with a walk, which led to Anissa Avila (Black Mountain, N.C.) entering as a pinch runner, and she sprinted home on Holston’s two-run scoring triple to right. Holston eventually scored on a wild pitch and Fritz put the finishing touches on the game when her two-out double to left scored Faith Adams (Henrico, Va.) and Jordan Durbin (Mechanicsville, Va.).

Stat of the Game
Six different Buccaneers accounted for their season-high 13 hits and eight different players scored a run in the run-rule victory.

Notables
» Julia Fritz posted her second straight multi-hit game as she finished 3-for-5 with a home run, double, two runs and three RBI … Fritz’s third-inning home run was her first since May 8, 2019 when she homered in a 5-1 win over Mercer in the Southern Conference Tournament … The three hits and three RBI also marked season highs for the Buccaneer first baseman.
» Nikki Grupp also posted her first three-hit game of the year as she went 3-for-4 with a double, two runs and two RBI.
» Lilly Holston and Lili Bowen both drove in two runs each as ETSU’s 4-thru-6 hitters combined for six of ETSU’s 10 RBI.

Up Next
ETSU concludes its eight-game homestand Tuesday afternoon when the Bucs host Radford in a non-conference doubleheader, starting at 3 p.m. from Betty Basler Field.