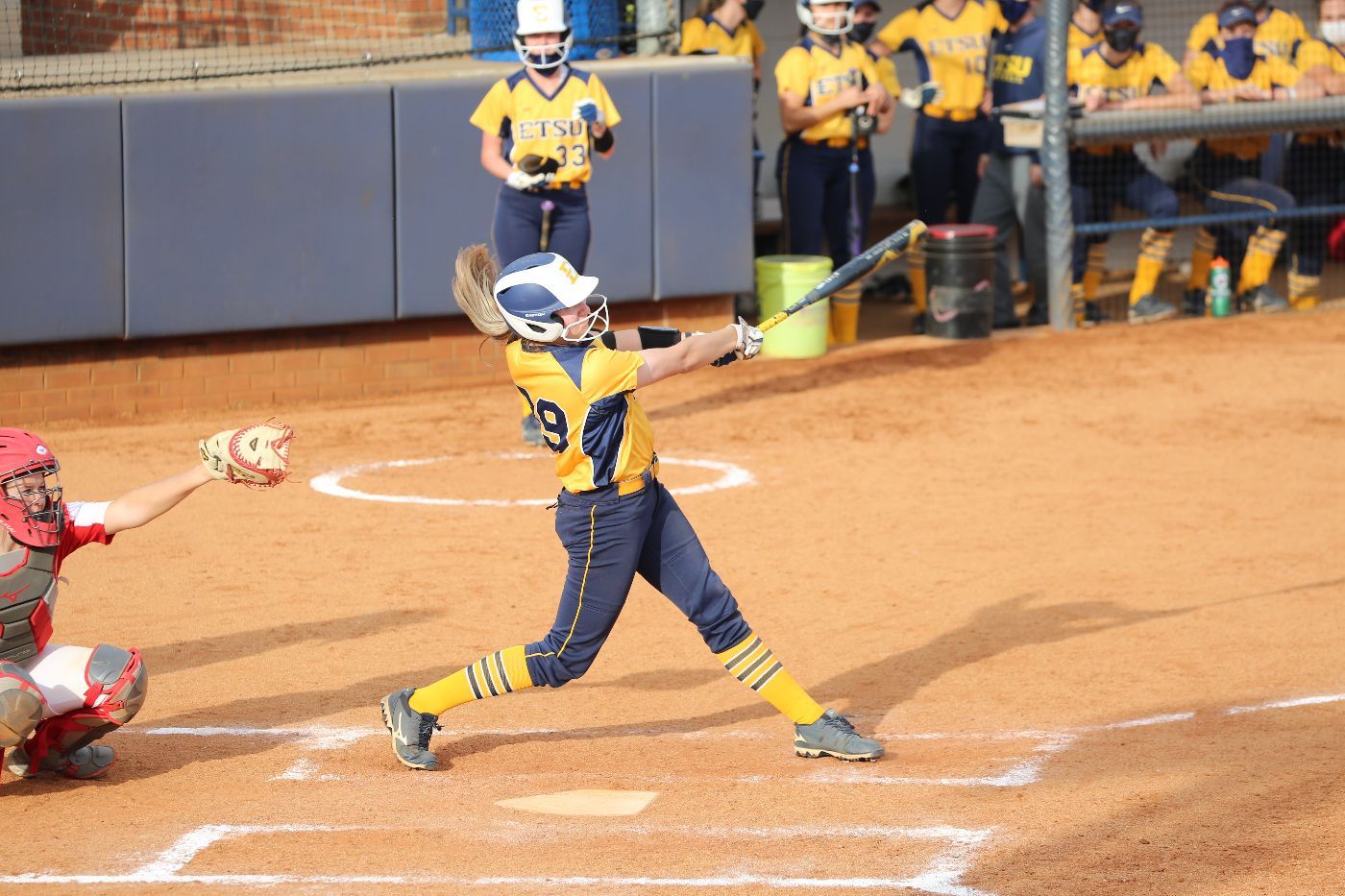 ETSU puts together 13 runs in 16 innings between both games

JOHNSON CITY, Tenn. (March 16, 2021) – After a run-rule first game, the ETSU Buccaneer Softball squad used 10 innings to pull off the sweep against the visiting Radford Highlanders. The Bucs took care of business in game one, besting Radford in six innings by the score of 9-1. ETSU provided the home fans with a thriller in game two, tying the most innings played in the Betty Basler Field era as the Bucs blasted a walk-off two-run homer in the bottom of the 10th inning for the 4-2 win. With the sweep, ETSU improves to 9-5 on the year, while Radford falls to 6-10.

Game 1: ETSU 9, Radford 1 (6 innings)
Following a scoreless first frame, the Bucs jumped on the board quickly to start the bottom of the second inning following a two-run blast from Lili Bowen (Charlotte, N.C.). Bowen belted her second long ball of the season to bring home Lilly Holston (Powell, Tenn.) who led off the inning with a walk. ETSU doubled its lead four batters later as Julia Fritz (Glen Allen, Va.) emptied the bases with a sharp two-run double to left-center field for the 4-0 advantage.

The Bucs tacked on an extra run in the bottom of the third inning, this time off the bat of Andrea Sarhatt (Knoxville, Tenn.) with an RBI single through the right side of the infield. Sarhatt’s base knock plated Holston from third, while Bowen was cut down at the plate trying to extend the lead.

ETSU poured on two more runs in the bottom of the fifth inning, taking advantage of a pair of Radford errors. Jayla Shelton (Indianapolis, Ind.) provided the first Buccaneer run in the fifth, making her first start of the season. The sophomore infielder reached on a fielder’s choice to second, bringing home Holston from third. Sarhatt brought Shelton across the plate in the next at bat with another RBI single through the right side, extending the Blue & Gold lead to 7-0.

Radford scored its lone run in the top of the sixth inning, with Madison Canady lacing an RBI single through the right side of the infield. One run was all the Highlanders could get as Kelly Schmidt (Norcross, Ga.) slammed the door shut, leaving the bases loaded for the second time in the game.

ETSU put the game away in the bottom of the frame, scoring two runs on two hits. Nikki Grupp (Jacksonville, Fla.) nearly ended the game with one swing of the bat but settled for a loud double off the left field fence, bringing home Anissa Avila (Black Mountain, N.C.) for the 8-1 advantage. Holston ended the game in her next at bat, completing the 3-for-3 performance at the dish with a game-ending RBI single to right center to bring Grupp across the plate for the 9-1 victory.

Stat of the Game
Four different Buccaneers recorded multiple hits in the game-one victory over the Highlanders. Holston led the squad with a game-high three hits, while Bowen, Fritz and Sarhatt each collected two hits.

Notables
» Holston put together a perfect performance at the plate, finishing 3-for-3 for the first time in her collegiate career … The Tennessee native added one RBI in the victory.
» Bowen, Fritz and Sarhatt each collected two RBIs, with Bowen doing so with one swing of the bat.
» ETSU recorded 12 hits in the win, marking the third game this season with double-digit hits and second in-a-row.
» Schmidt tossed her fifth consecutive complete game, allowing one run on six hits in 6.0 innings of work … The Georgia product added four strikeouts while improving to 5-2 on the campaign.
» ETSU improves to 13-20 all-time against Radford with the win, including 9-8 when taking on the Highlanders in Johnson City, Tenn.

Game 2: ETSU 4, Radford 2 (10 innings)
The drama picks up in the bottom of the fifth inning as both teams accounted for just four hits in the first four innings of work. The Bucs plated the game’s first run in the bottom of the fifth inning after back-to-back errors cost the Highlanders. Kasidy Dunn (Friendsville, Tenn.) crossed the plate after an errant throw by the Radford shortstop, giving the Bucs the brief 1-0 edge.

The Highlanders tied the game up in the top of the sixth with a one-out triple to right center field from Talia Douglas. Abby Wilson executed the perfect squeeze play in the next at bat to give Radford the 2-1 lead.

The Bucs entered the bottom of the seventh inning, facing the one-run deficit. All of that changed with one swing of the bat as Dunn lifted a towering fly ball to left field that just continued to carry, eventually falling on the other side of the fence for the equalizing home run. Dunn’s solo shot to lead off the bottom of the seventh was her second collegiate long ball and could not have come in a bigger at bat.

With the international rule in place, the drama continued as both teams were granted the leadoff runner on second to begin extra innings. After Fritz shut the door on Radford in the top of the eighth, it was ETSU’s turn with a chance to win. With two outs and a runner on third, Grupp laced a sharp line drive that had game-winner written all over it. However, shortstop Autumn Slemaker made a highlight-reel, diving catch to rob the Bucs of the walk-off in the eighth inning.

The Highlanders went three-up and three-down in the top of the ninth, putting the momentum back in the hands of the Bucs. ETSU loaded the bases in the bottom of the ninth, but could not string together the fly ball needed to bring home the winning run.

The drama continued in the top of the 10th as Radford had runners on the corners and one away. Highlander speedster, Sydney Fisher, laid down a great bunt in an attempt at the squeeze play. However, Fritz’s reaction preserved the tie as she raced to the ball and flipped it to Toler who laid the tag on the go-ahead run.

After a scoreless top half of the 10th, ETSU had its third chance at the game-winning hit and the third time was the charm. With a runner on second, Fritz blasted a lead-off, no-doubter over the left field fence to lift the Bucs to the 4-2 extra-inning triumph over the visiting Highlanders.

Stat of the Game
Julia Fritz pitched the longest game of her collegiate career, throwing 4.2 inning of work to get the win. This is also the second time in Fritz’s career that she earned the win in the circle and recorded the walk-off hit – doing so in ETSU’s 4-3 win over No. 20 Tennessee on March 1, 2020.

Notables
» The 10-inning win over Radford marked the third 10-inning game in ETSU Softball history – Chattanooga (March 17, 2001) & Stetson (April 2, 2010) – the Bucs are 2-1 in 10-inning games.
» MacKenzie Dyson (Hanahan, S.C.) began the game in the circle for ETSU and tossed 5.1 innings of play with two earned runs on four hits with two punchouts.
» Fritz earned her first win of the season after allowing just three hits in 4.2 innings of work.
» Dunn, Fritz and Holston each tallied two hits in the second game of Tuesday’s doubleheader.
» The Bucs are now 14-20 all-time against Radford after Tuesday’s sweep, including 10-8 in Johnson City, Tenn.

Up Next
The Bucs will travel to Durham, N.C. for a Sunday doubleheader at North Carolina Central beginning at noon.