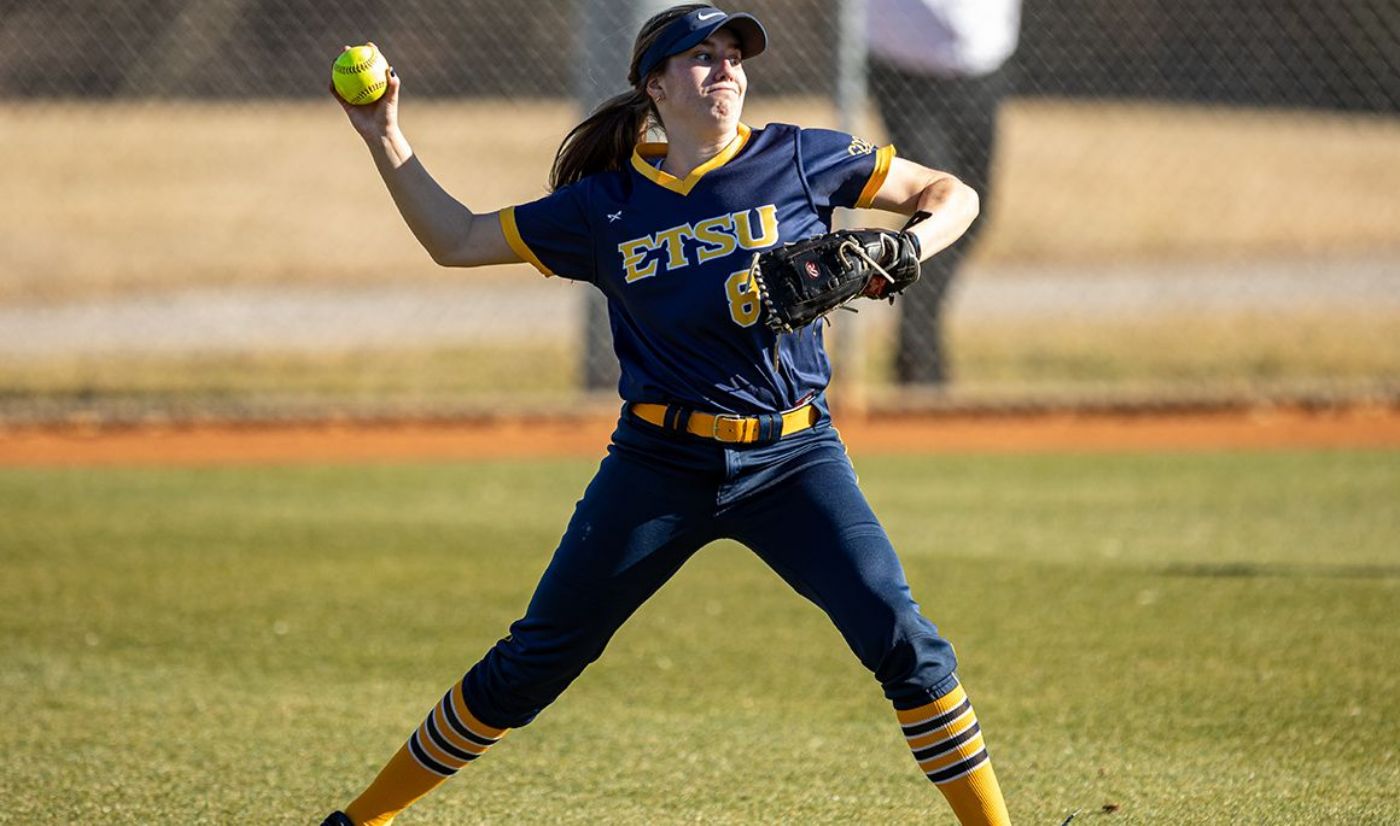 ETSU claims game one over Eagles; falls in game two

CARY, N.C. (March 21, 2021) – The ETSU Buccaneer softball team took its winning streak to Thomas Brooks Park in Cary, N.C. where the Bucs split a twin bill on Sunday against North Carolina Central. ETSU claimed game one handedly, winning 8-0 in six innings. However, the Bucs surrendered 11 hits and eight runs in game two, falling 8-7 to the Eagles.

Game 1: ETSU 8, N.C. Central 0 (6 innings)
ETSU wasted no time in jumping on the scoreboard as Kylie Toler (Bradenton, Fla.) plated the first run with an RBI ground out in the top of the first inning.

The Bucs kept their foot on the gas in the top of the fourth inning, plating two more runs on one hit and two Eagle errors. Lilly Holston (Powell, Tenn.) plated the first run in the inning with a sacrifice fly to left. ETSU saw its lead extend to 6-0 following an RBI single up the middle off the bat of Nikki Grupp (Jacksonville, Fla.).

The Bucs put the game away for good in the top of the sixth, scoring two more runs following an RBI sacrifice fly from Holston and a N.C. Central error.

Senior pitcher Kelly Schmidt (Norcross, Ga.) slammed the door shut on the Eagles’ chances of scoring, yielding just two hits in the six-inning shutout. Schmidt earned her sixth win in the circle, striking out seven batters in the process.

Stat of the Game
Six different Buccaneers tallied a base hit in the opening win, accounting for all six of ETSU’s base knocks in game one.

Notables
» Schmidt tossed her sixth complete game of the season, logging her fourth-shutout victory of the year.
» Toler picked up three RBIs in the win over the Eagles, while Holston finished the game with two.
» The Bucs pushed their win streak to four games following the eight-run victory.
» The shutout win was the fourth time in six tries that the Bucs shutout the Eagles.
» ETSU improved to 6-0 all-time against North Carolina Central with the 8-0 win.

Game 2: N.C. Central 8, ETSU 7
North Carolina Central put the first runs on the board in the home half of the third inning, scoring four runs on three hits for the early 4-0 lead.

The Bucs cut into the deficit in the top of the fourth inning when Faith Adams (Henrico, Va.) laced a two-run single up the middle, trimming the Blue & Gold hole in half.

After the Eagles earned the two runs back in the bottom of the fourth, stretching their lead to 6-2, ETSU saw another offensive spark to tie the game. With bases loaded and one out, Bowen unloaded for her third homer of the season, plating all four runs to pull even with N.C. Central at six apiece.

ETSU claimed its first and only lead of the game in the top half of the sixth inning when Holston delivered a first-pitch RBI single to center field, bringing home Lauren Lee (Cleveland, Tenn.) from second for the 7-6 lead.

However, N.C. Central tagged pitcher Allison Farr (Knoxville, Tenn.) with her second loss of the season, scoring two runs on four hits in the bottom of the seventh to walk away with the one-run victory.

Stat of the Game
Farr entered the game in relief in the fourth inning and kept the Eagles hitless until surrendering four hits and two runs in the bottom of the seventh.

Notables
» The Eagles picked up their first win of the season with the one-run edge over the Bucs.
» Taylor Boling (Jasper, Ga.) surrendered six runs on six hits in 3.0 innings of work before being pulled for Farr.
» Six Buccaneers tallied a hit, with Adams leading the team with a pair of knocks.
» With the loss, ETSU saw its four-game winning streak come to an end, while also ending a perfect 6-0 mark against the Eagles in program history.

Up Next
ETSU will be back in action on Wednesday, March 24 when the Bucs play host to USC Upstate in a midweek doubleheader. First pitch will commence at 3 p.m.