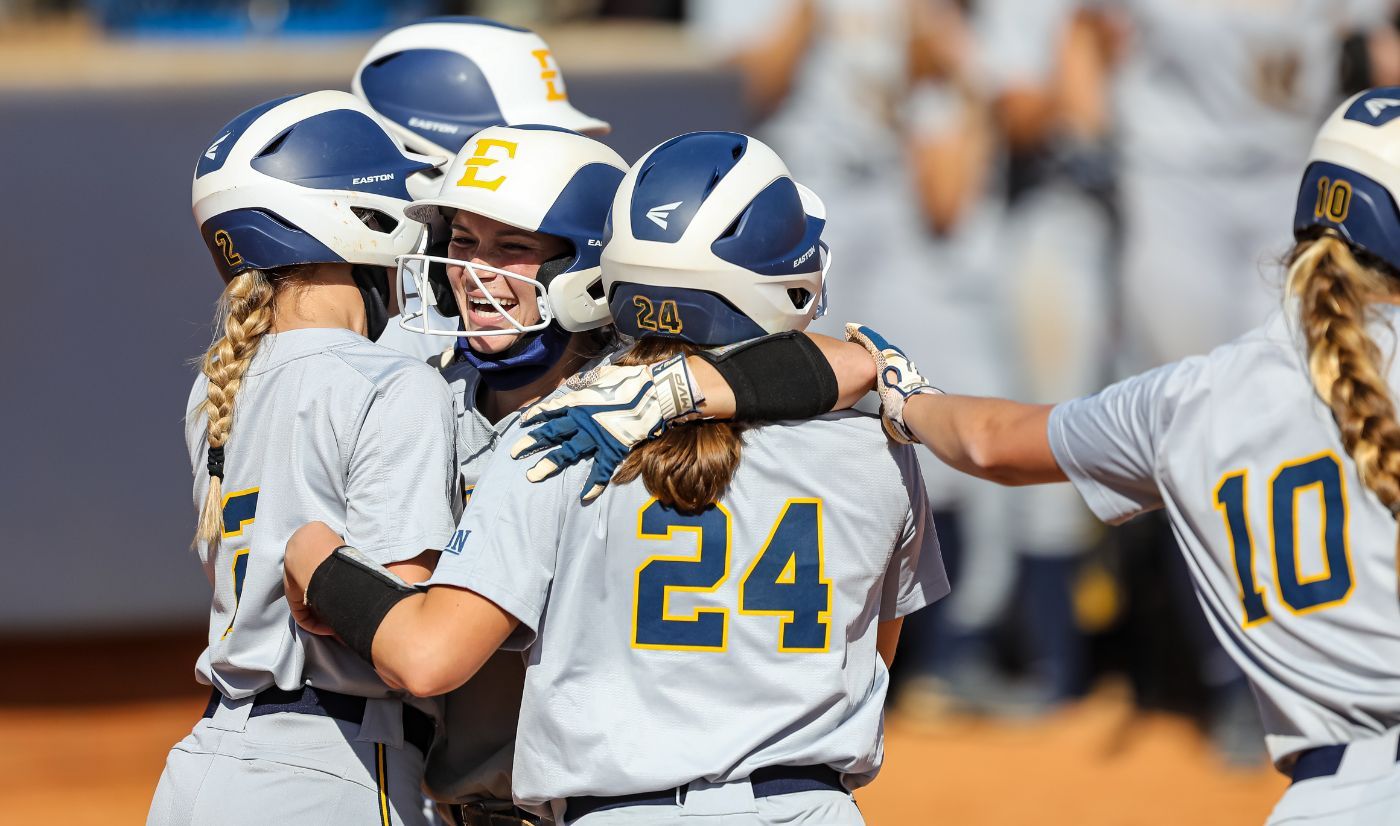 JOHNSON CITY, Tenn. (March 24, 2021) – It was an eventful day at Betty Basler Field as the ETSU Softball team pulled off a pair of late-inning comeback wins over USC Upstate. The Bucs claimed game one by the score of 7-5 before securing a 7-6 win in game two. With the pair of wins, ETSU improves to 12-6, while the Spartans fall to 16-6.

Game 1: ETSU 7, USC Upstate 5
The Spartans scored first in the top half of the third inning, scoring three runs on two hits and two Buccaneer errors to jump out to the 3-0 advantage.

ETSU gained one of the runs back to lead off the bottom of the frame as Julia Fritz (Glen Allen, Va.) took the ball to the opposite field for her third homer of the season, trimming the deficit to 3-1.

USC Upstate doubled its lead to four runs, taking advantage of another ETSU error as the Spartans plated two runs on one hit in the top of the fifth for the 5-1 lead.

The drama picked up in the bottom of the fifth as ETSU refused to go down without a fight. With bases juiced and one away, Nikki Grupp (Jacksonville, Fla.) connected for a game-tying grand slam that hit the top of the fence and bounced over. ETSU took a 6-5 lead in the very next at bat as Lili Bowen (Charlotte, N.C.) delivered a no-doubter over the left field fence, her fourth of the season. The Bucs were not done there. Kylie Toler (Bradenton, Fla.) roped a third consecutive blast, this one to right center field off the scoreboard, adding an insurance run for the Bucs.

The Buccaneer defense and pitching kept the Spartans off the board in the final two innings of play. Grupp made a diving play at third in the top of the sixth inning, tagging third base for the force out to end the scoring threat. The Spartans loaded the bases in the top of the seventh with two away, but Fritz pitched out of the jam, striking out the final batter to preserve the 7-5 win.

Stat of the Game
The Bucs scored six runs in the bottom of the fifth via back-to-back-to-back home runs. The fifth inning rally was the first time since May 7, 2016 at Chattanooga that the Bucs connected on three consecutive homers. The Bucs won that game, 6-4.

Notables
» ETSU belted four homers in game one, the first four-homer performance for ETSU since an 11-7 win at Mercer on April 17, 2016.
» Allison Farr (Knoxville, Tenn.) picked up her first win of the season, doing so in relief … Farr tossed 1.1 innings and allowed just one hit, while punching out three batters.
» Fritz earned her first save of the year, pitching 1.0 inning, surrendering one hit, one walk but striking out the final batter of the game.
» Kelly Schmidt (Norcross, Ga.) started in the circle and lasted 4.2 innings, yielding five runs (one earned) on three hits.
» Eight different Buccaneers recorded a hit in game one, led by Lilly Holston (Powell, Tenn.) with two base knocks.
» ETSU improved to 6-20 all-time against the Spartans with the win, including 4-7 at home.
» With the win, the Bucs have now defeated the Spartans twice in the same year for the first time since 2009.

Game 2: ETSU 7, USC Upstate 6
ETSU struck first, wasting no time with a solo homer in the bottom of the first inning. With one out in the inning, Lipscomb transfer Alana Collins (Greeneville, Tenn.) blasted her first collegiate home run. Collins’ shot drilled the scoreboard in right center as the Bucs jumped out to the 1-0 lead.

ETSU was gifted a run in the bottom of the second inning off two errors on the same play by Spartan pitcher, Nyah Vogel. Andrea Sarhatt (Knoxville, Tenn.) hit a ball back to Vogel who bobbled it, allowing Sarhatt to reach safely at first. Vogel also threw the ball away, enabling Faith Adams (Henrico, Va.) to score from second as Sarhatt took third. ETSU was unable to add another insurance run in the inning, settling for the 2-0 lead.

USC Upstate threatened to score in the third inning but to no avail. However, the Spartans plated four runs on four hits in the top of the fourth inning. The visiting squad tied the game with a two-run double to the left field fence off the bat of Marisa Soterakis. The very next pitch left the field as Bre Cooper blasted a go-ahead two-run homer for the 4-2 advantage.

ETSU trimmed the deficit in half in the bottom of the fifth inning after Bowen plated Holston with an RBI single back to center field. The Bucs carried that momentum into the bottom of the sixth inning, providing the sparks for the second consecutive game. After a one-out triple from Sarhatt, Kasidy Dunn (Friendsville, Tenn.) evened the contest with an RBI double to left center field. ETSU later loaded the bases with two outs and Grupp stepped up to the plate. For the second game in a row, the senior infielder delivered, roping a bases-clearing double to right center as ETSU reclaimed the 7-4 edge.

The drama did not end there, this time it was USC Upstate’s turn to provide the action. After a leadoff single, the Spartans plated a run with a double off the bat of Tiffany Domingue. Domingue scored two batters later via the sacrifice fly from Madison Lanoux. That was the final run of the game for the Spartans with Taylor Boling (Jasper, Ga.) slamming the door shut for the 7-6 victory.

Stat of the Game
ETSU pulled off yet another come-from-behind win against the Spartans, this time scoring four runs in the sixth inning to take the 7-4 advantage.

Notables
» Grupp had two hits in the doubleheader, resulting in seven RBIs with two swings of the bat.
» It was the Lilly and Lili show as the duo combined for four hits in the game.
» MacKenzie Dyson (Hanahan, S.C.) started in the circle for ETSU, throwing 4.1 innings of action, allowing four runs on seven hits.
» Boling picked up her second win of the season, surrendering just two runs in 2.2 innings, striking out three batters.
» ETSU is now 7-20 all-time against the Spartans with the win, including 5-7 at home.
» With the win, the Bucs claimed three victories in a single season against USC Upstate for the first time in program history – this is the third time that the two squads have played at least three games in a single season.

Up Next
ETSU will open Southern Conference play this weekend at UNCG in Greensboro, N.C. The three-game series will begin on Friday at 1 p.m. with a doubleheader and will conclude on Saturday with a single game at 12 p.m. The series was originally scheduled for Saturday-Sunday but was moved ahead one day due to inclement weather.