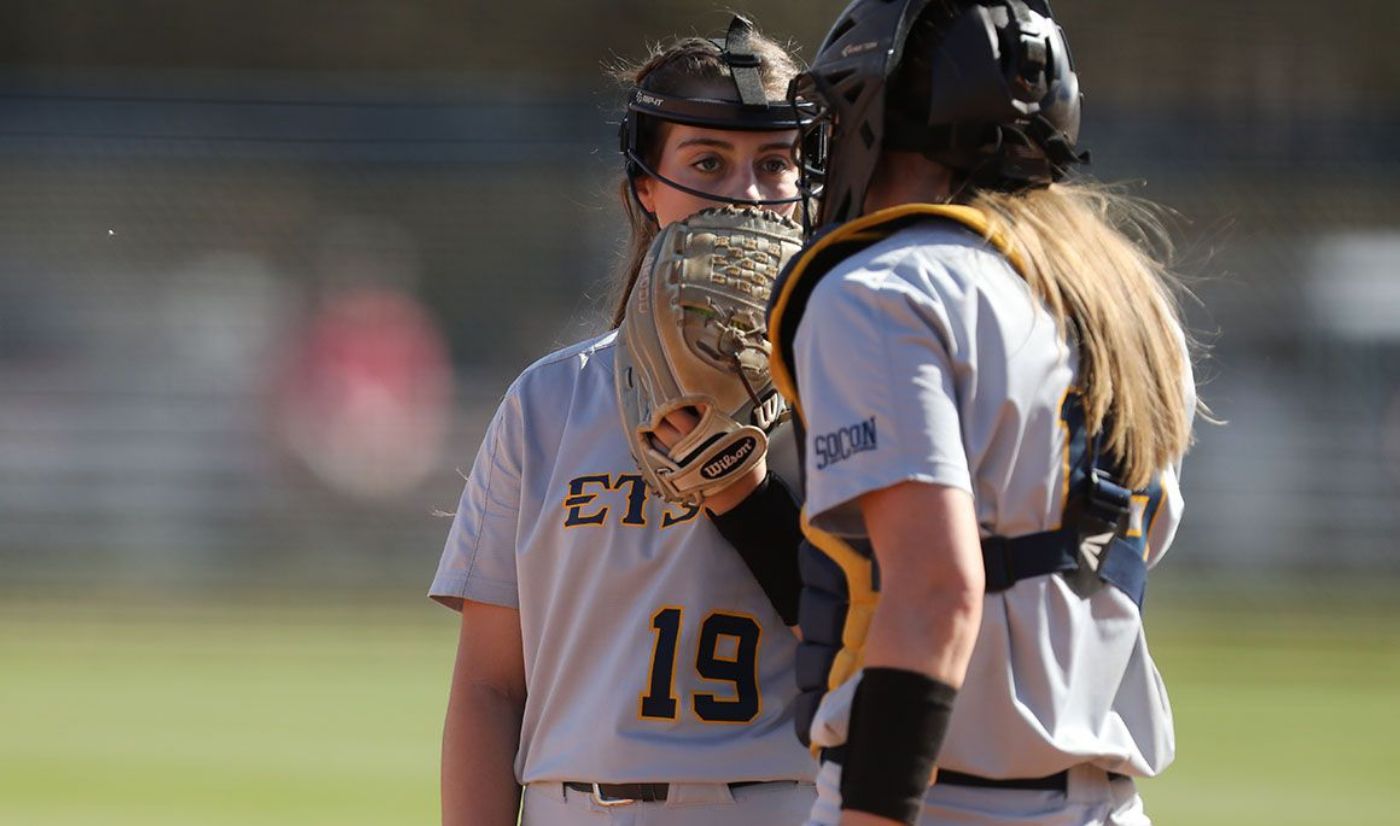 JOHNSON CITY, Tenn. (April 2, 2021) – The Southern Conference home opener did not go the way the ETSU Softball squad wanted, dropping a pair of shutout losses to visiting Chattanooga on Friday afternoon. With the losses, the Bucs drop to 13-10 on the season and 1-4 in league play.

Game 1: Chattanooga 1, ETSU 0
There was not a lot of offense between the two squads in game one as there were eight combined hits and just one run scored.

The Mocs plated the game’s only run in the top half of the sixth following an RBI single off the bat of R.J. Janke, plating Hayleigh Weissenbach from third.

Stat of the Game
The Bucs left eight runners on base in game one, including six runners in the final three innings of play.

Notables
» Kelly Schmidt (Norcross, Ga.) was tacked with the loss despite pitching a complete-game and allowing just one run…Schmidt dropped to 7-3 after allowing five hits, one run and punching out five.
» Lilly Holston (Powell, Tenn.) ran her reach-base streak to 14 games with a double in the bottom of the first inning.
» ETSU falls to 11-27 all-time against the Mocs following the one-run loss, including 5-11 in Johnson City.

Game 2: Chattanooga 3, ETSU 0
It was much of the same story in game two for the Bucs as ETSU mustered just four hits in the 3-0 shutout loss to the Mocs.

Chattanooga struck first with an RBI single to left field in the top of the first frame. The Mocs also added one run on a sacrifice fly in the fourth inning, followed by an RBI base knock in the fifth inning.

The Bucs’ best opportunity came in the bottom of the fourth with runners on the corners and two away. However, a harmless groundout to the catcher ended the ETSU scoring threat.

Stat of the Game
In her first day back in the lineup, Kelly Warren (Mechanicsville, Va.) finished game two going 2-of-3 at the dish, finishing the day with three of ETSU’s seven hits.

Notables
» Allison Farr (Knoxville, Tenn.) dropped to 1-3 on the season, allowing three runs in 4.2 innings.
» Taylor Boling (Jasper, Ga.) entered in relief for Farr, hurling 2.1 innings of work and allowing just one base hit.
» The Bucs dropped to 11-28 all-time against the Mocs, including 5-12 in Johnson City.
» This is the first time since 2019 that the Bucs were shutout in back-to-back games…ETSU was shutout by USC Upstate on March 6, 2019 by the scores of 8-0 and 3-0.

Up Next
The Bucs will close out the three-game series with the Mocs on Saturday with a single game at noon at Betty Basler Field.