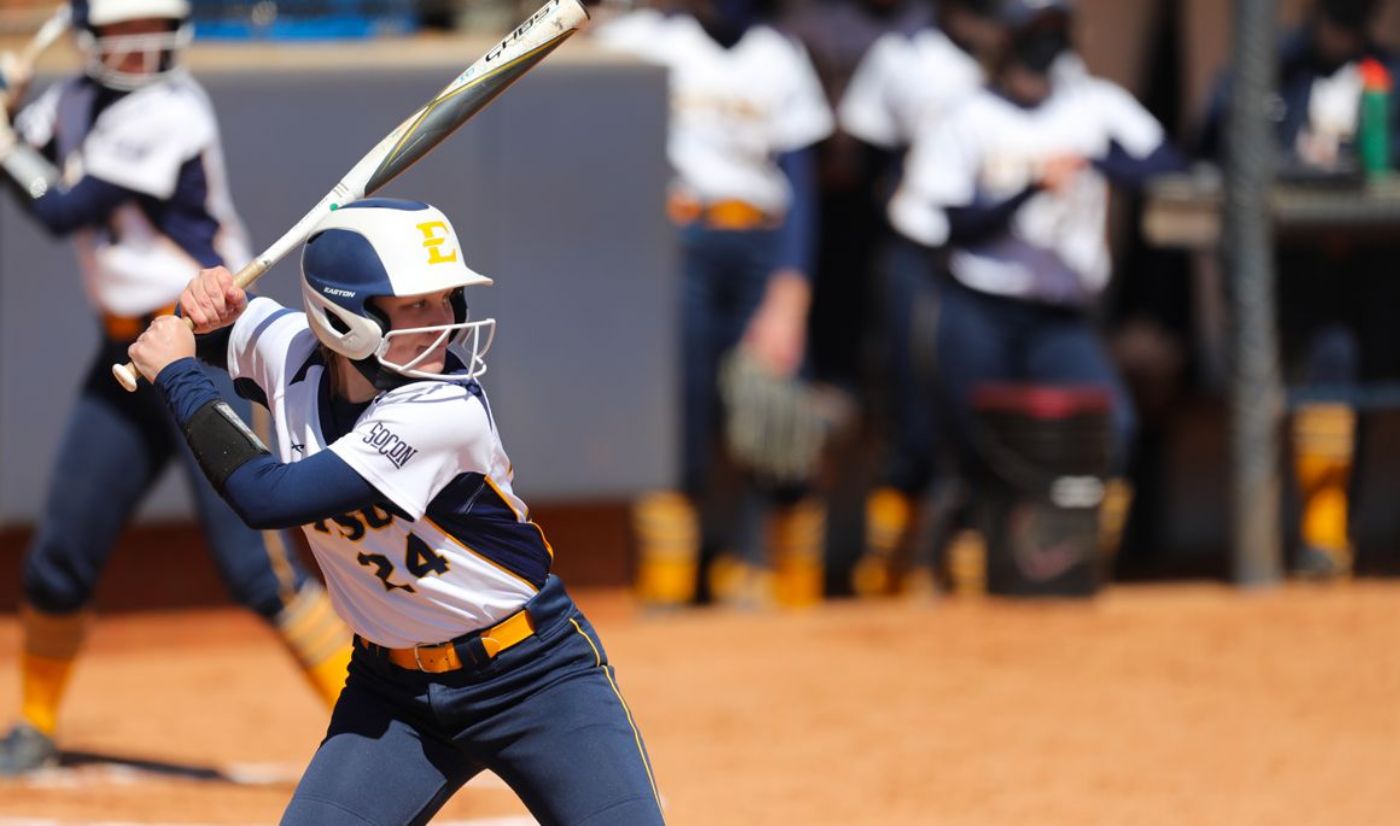 JOHNSON CITY, Tenn. (April 3, 2021) – Despite keeping Chattanooga scoreless for nine innings and freshman Lilly Holston (Powell, Tenn.) belting a game-tying home run in the bottom of the 10th inning, the ETSU softball team couldn’t secure a win in the series finale, as the Bucs suffered an 11-inning heartbreaking 3-2 loss to the Mocs on Saturday from Betty Basler Field.

In the longest game played in Betty Basler Field history, both teams had plenty of scoring chances in regulation, but with both pitching staffs holding the offense at bay, Chattanooga struck first with a two-run home run by Hayleigh Weissenbach in the top of the 10th inning.

After missing scoring chances to win it in the eighth and ninth innings, the Bucs finally snapped their scoreless streak when Holston connected on a rocket to left field for her second home run of the season, tying the game at, 2-2.

Unfortunately, ETSU was unable to keep the momentum as the Mocs quickly regained the lead in the top of the 11th and held on the for the win. With the international tiebreaking rule taking  place at the start of the 10th inning, the Mocs started with a runner at second in the 11th and Kendall Andrews scored when Kailey Snell led off with a double to left-center. Julia Fritz (Glen Allen, Va.), who entered in relief in the sixth, did a solid job keeping it a one-run game. Snell advanced to third on a sacrifice bunt and she was later tagged out at the plate on a fielder’s choice ground out to short by Addy Keylon. Fritz induced an inning-ending fly out to left-center, keeping it a 3-2 score.

Like the Mocs, ETSU started the bottom of the inning with Kylie Toler (Bradenton, Fla.) being placed on second, but the Bucs were unable to bring her home. Toler moved over to third on a sac bunt by Andrea Sarhatt (Knoxville, Tenn.), while Lauren Lee (Cleveland, Tenn.) fouled out to the catcher and Kasidy Dunn (Friendsville, Tenn.) struck out swinging to end the game, giving Chattanooga the series sweep.

Earlier in extra innings, the Bucs had the bases loaded with one out in the eighth inning, but Holston grounded into a fielder’s choice back to the circle and Lili Bowen (Charlotte, N.C.) ending the inning by lining out to right. An inning later, ETSU had the bases loaded with no outs, and again, came away empty. ETSU hit into three straight ground outs to end the frame.

Stat of the Game
Both teams combined to leave 26 runners on base (12 by the Bucs) with ETSU going 3-of-18 with runners in scoring position and Chattanooga going 3-of-12 in scoring chances.

» Kylie Toler led the Bucs with three hits (two doubles), while Alana Collins (Greeneville, Tenn.) – who started at third base in replace of Nikki Grupp (Jacksonville, Fla.) – tallied two hits and scored on the Holston home run.
» Kelly Schmidt (Norcross, Ga.) got the started and tossed 5.2 scoreless innings of eight-hit ball with five strikeouts … Julia Fritz pitched the final 5.1 innings and was charged with three runs  (one earned) on five hits with five punch outs.

» Brooke Parrott, who earned the save, got the start for the Mocs and tossed four innings of two-hit ball, while Hannah Wood earned the win after issuing two runs (one earned) on six hits in seven innings.

» This marked the longest game in terms of innings and time in Betty Basler Field history (opened in 2009) …  The 11-inning game lasted exactly three hours.

Up Next
ETSU heads back on the road to play a three-game series at Western Carolina starting next Saturday in Cullowhee, N.C.