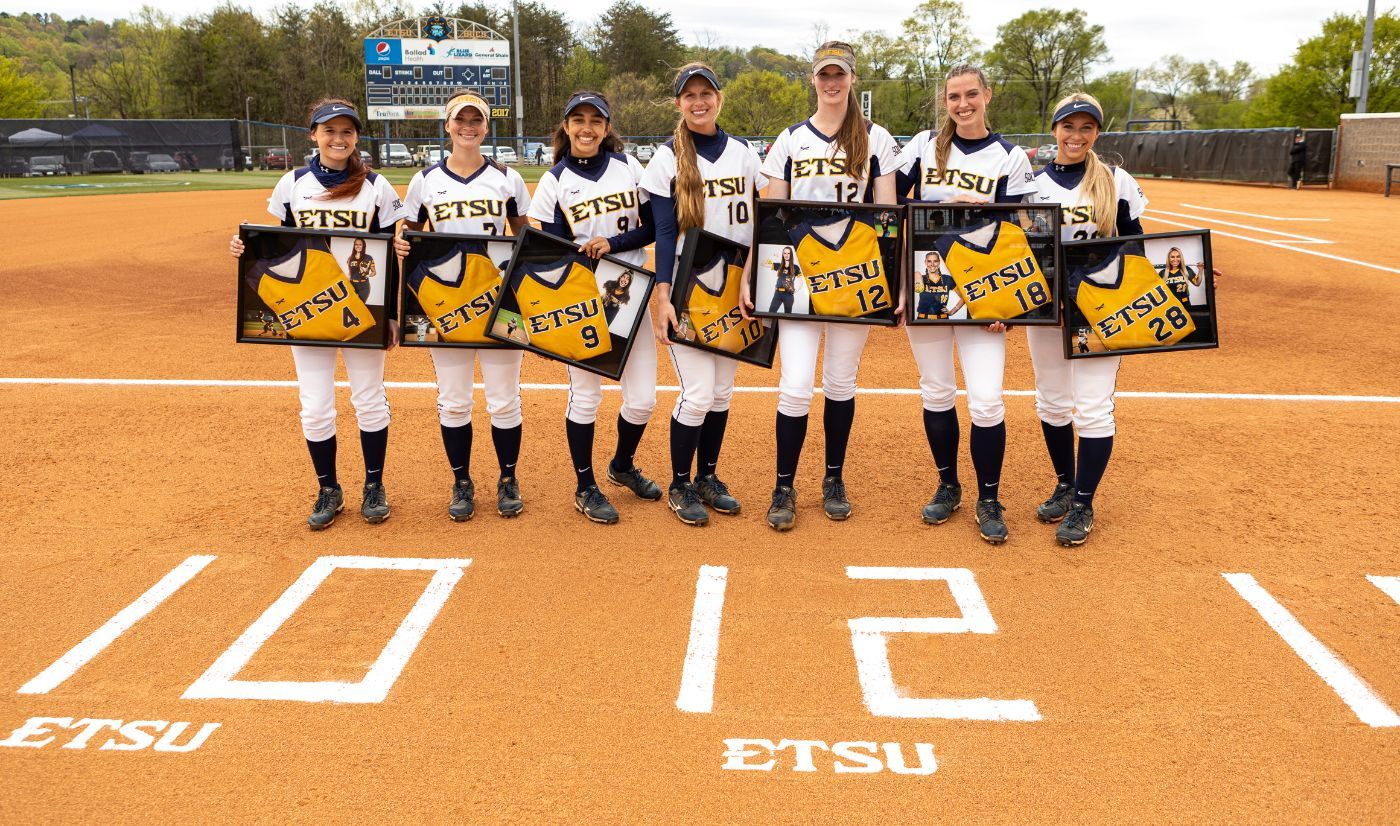 JOHNSON CITY, Tenn. (April 23, 2021) – The ETSU Softball team celebrated Senior Day on Friday afternoon with a doubleheader split against the Mercer Bears. With the split, ETSU improved to 14-20 on the season, including 2-12 in Southern Conference action.

Game 1: Mercer 8, ETSU 3
Mercer jumped out to a 2-0 lead through the first three innings, scoring both runs off the bat of Danielle Castleberry, including a solo homer in the third inning.

The Bucs used the third and fourth inning to tie the game at two apiece, turning two Mercer blunders into a pair of runs. The first run came following a single by Lilly Holston (Powell, Tenn.) that was too sharp to handle, resulting in a Mercer error to bring home Julia Fritz (Glen Allen, Va.) from second. The next inning, Saxon Radcliffe (Glen Allen, Va.) scored on a wild pitch after nearly missing a homer in her at bat.

After the Bears pulled ahead in the top half of the sixth, Radcliffe sent Betty Basler into a frenzy with a game-tying homer, her first of the season and her career. The Virginia native blasted the first pitch of the bat over the center field wall to tie the game at 3-3 in the bottom of the sixth.

As fast as the Bucs gained momentum, the Bears snatched it away in the top half of the seventh, scoring five runs on four hits to escape with an 8-3 victory in game one.

Stat of the Game
Despite the loss, the Bucs reached the double-digit hit plateau for just the fourth time this season. ETSU collected 10 hits, the first double-digit hit parade since recording 12 in a 4-2 win over Radford on March 16.

Notables
» Six different Bucs accounted for the 10 hits, including Fritz, Radcliffe, Kelly Warren (Mechanicsville, Va.) and Nikki Grupp (Jacksonville, Fla.) who each tallied two hits.
» Radcliffe had a party at the plate for the Bucs, hitting a long single off the fence, belting her first collegiate homer and accounting for the Bucs’ only RBI in the game.
» Prior to the game, ETSU honored its seven seniors and second-year graduate assistant athletic trainer Allie Robinson.
» Kelly Schmidt (Norcross, Ga.) was tacked with the loss, allowing eight runs (five earned) in seven complete innings.

Game 2: ETSU 5, Mercer 3
The Bears struck first again with an RBI ground out from Annie Potter in the top half of the second inning for the 1-0 Mercer lead.

ETSU jumped on the board in the fourth inning, scoring four runs on five hits with one Mercer error. The first run came off the bat of Fritz who laid down the perfect squeeze bunt to bring home Andrea Sarhatt (Knoxville, Tenn.). Fritz and Alana Collins (Greeneville, Tenn.) displayed heads up baserunning, each advancing a bag that was left unoccupied. Two batters later, Holston laced an RBI single up the middle to give the Bucs the 2-1 advantage. In the very next at bat, senior third baseman Nikki Grupp delivered a two-run single to left field to push the ETSU advantage to 4-1.

After Mercer trimmed the lead to two in the top of the fifth with a solo shot from Allie Jones, Radcliffe pushed the ETSU lead back to three runs with an RBI single to the shortstop.

The Bucs surrendered one run in the top of the seventh, but limited the damage to walk away with the 5-3 victory in game two of the three-game series.

Stat of the Game
For just the fourth time this season, and first since March 27, the Bucs scored four runs in one inning. ETSU used the four-run fourth inning to propel itself to the 5-3 win.

Notables
» Taylor Boling (Jasper, Ga.) picked up her third win of the season, going the distance in game two after allowing just two earned runs in 7.0 complete innings.
» Radcliffe completed a strong day at the plate, finishing 4-for-7 with two RBIs, two runs scored and one home run.
» Seven different Buccaneers accounted for the eight hits in game two.
» With the win, the Bucs snap a 12-game losing skid.
» ETSU is now 16-26 all-time against the Bears, including 9-13 in Johnson City.

Up Next
The Bucs are scheduled to complete the three-game series tomorrow at 1 p.m. at Betty Basler Field. However, there is inclement weather in the forecast, so please follow @ETSUSoftball on Twitter for further updates.