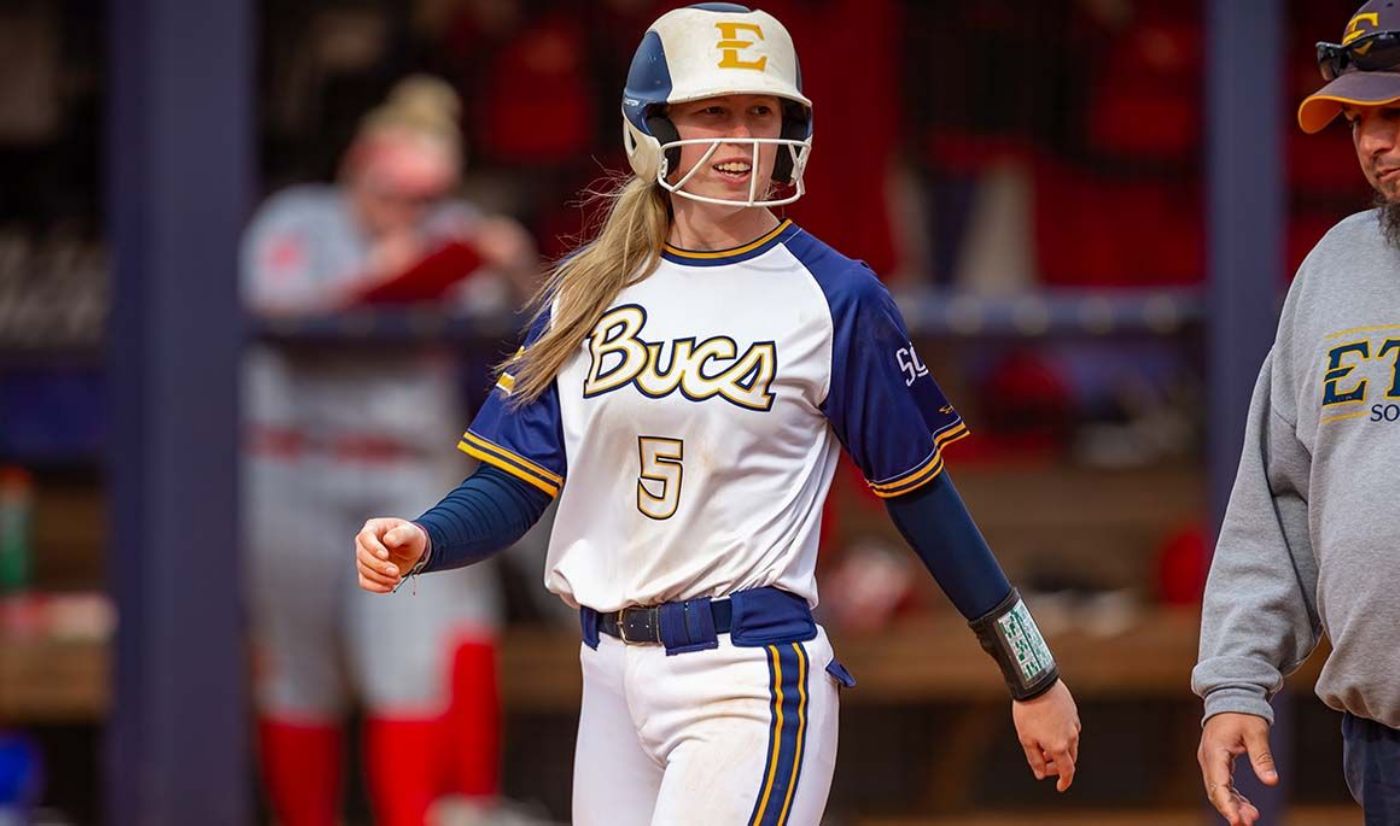 STATESBORO, Ga. (Feb. 13, 2022) – The wait is over for the Bucs and Head Coach Belinda Hendrix! ETSU secured its first win of the season in day three of the Bash in the Boro in Statesboro, Ga., defeating Binghamton by the final score of 8-3. The Bucs then turned around to square off against Georgia Southern, a contest that resulted in a 4-0 shutout for the Eagles.

Game 1: ETSU 8, Binghamton 3
The first three innings were a back-and-forth affair with Binghamton taking the first lead of the game following Allison L’Amoreaux’s home run in the top half of the second. ETSU responded with an RBI double off the bat of Bailey Turnbow (Cookeville, Tenn.) to plate Andrea Sarhatt (Knoxville, Tenn.) for the equalizing run in the bottom of the second inning.

The Bearcats regained the lead in the top half of the third frame after an RBI single to left field from Makayla Alvarez. For the second consecutive inning, the Buccaneers responded. This time it was freshman Riley Nayadley (Ooltewah, Tenn.) with a sacrifice fly to score Kelly Warren (Mechanicsville, Va.) to even things at two apiece. ETSU was not done yet after Sara Muir (Sequatchie, Tenn.) blasted an RBI double to left center, bringing home Riley Tucker (Mount Pleasant, N.C.) for the 3-2 advantage. The Bucs added to their lead in the bottom of the fourth inning following an RBI groundout from Amber Atkins (South Pittsburg, Tenn.).

The Bearcats trimmed the ETSU lead to 4-3 in the top of the fifth inning, but that was as close as the Bucs would allow Binghamton to crawl. ETSU scored four more runs on two hits and two Bearcat errors to push the lead to 8-3, securing the first win of the season.

Stat of the Game
After a scoreless first inning, the Bucs plated at least one run in each of the next five innings. Three of those five innings resulted in a pair of ETSU runs.

Notables
» Head Coach Belinda Hendrix earned her first win of her ETSU career following the triumph over the Bearcats.
» The Bucs were led at the plate by Warren with a 3-for-4 performance and two runs scored with one RBI.
» The Bucs successfully swiped six backs, just one shy of tying the all-time single-game record.
» Taylor Boling (Jasper, Ga.) started the game in the circle, pitching 3.0 innings of work and allowing five hits and two runs.
» Allison Farr (Knoxville, Tenn.) earned her first win of the season after throwing 4.0 innings of relief and yielding one run on five hits.
» ETSU evens the all-time series with Binghamton at 1-1, both meetings coming at the Bash in the Boro.

Game 2: Georgia Southern 4, ETSU 0
A first inning error resulted in an early 1-0 deficit for the Bucs following Madi Banks scoring off a Jess Mazur single and an ETSU blunder. The Eagles would maintain the 1-0 advantage until the fifth inning when Georgia Southern scored three more runs on three hits and one ETSU error.

The Bucs were unable to muster enough offense to retaliate against the Eagles in the tournament finale. ETSU stranded the bases loaded in the second and fourth inning, but would not get any closer than that.

Notables
» Alana Collins (Greeneville, Tenn.) finished 2-of-3 at the plate, recording two of the four Buccaneer hits.
» ETSU tossed Tucker in the circle for the finale, yielding one run in 3.2 innings of work.
» With the loss, ETSU falls to 8-12 all-time against the Eagles.

Up Next
ETSU is back in action on Saturday, Feb. 19 when it travels to Boiling Springs, N.C. for the Red & Black Classic hosted by Gardner-Webb.