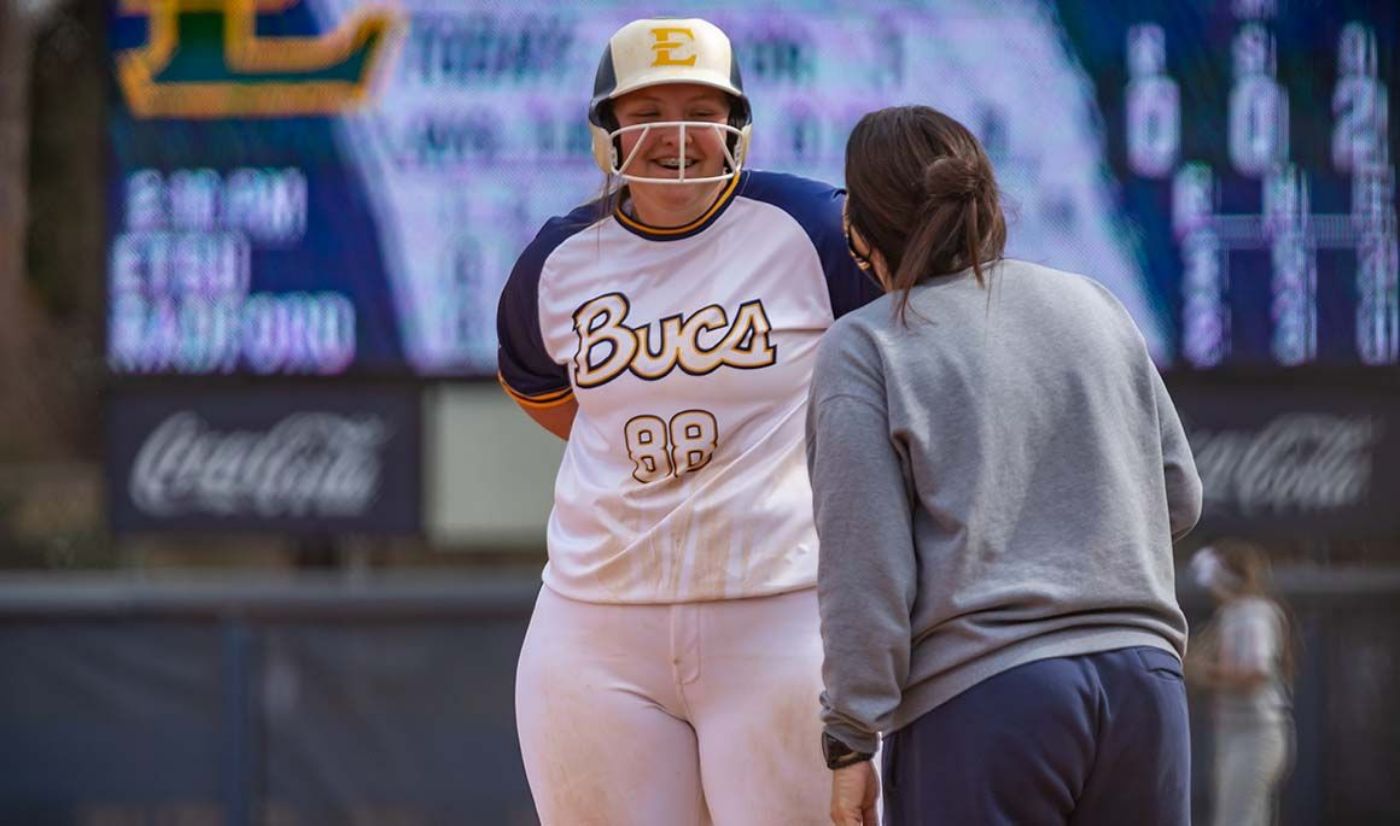 BOILING SPRINGS, N.C. (Feb. 19, 2022) – ETSU Softball split the opening day of the Red & Black Classic in Boiling Springs, N.C., earning a 10-5 win over Morehead State before falling to host Gardner-Webb by the final of 3-2. With the split, ETSU runs its record to 2-5 on the young campaign.

Game 1: ETSU 10, Morehead State 5
Morehead State took advantage of ETSU’s inability to score runs in the first three innings as the Bucs stranded six runners early. The Eagles took a 2-0 advantage in the bottom of the third inning after Alexis Strother laced an RBI double to left center.

Morehead State retaliated with two more runs in the bottom of the fourth to reclaim the two-run advantage.

ETSU’s Sara Muir (Sequatchie, Tenn.) cut the deficit in half with her first homer of the season and the first Buccaneer long ball, roping the ball off the top of the right field foul pole in the top of the fifth inning. In the very next inning, ETSU captured the lead for good. With the bases juiced and two away, Savannah Ricketts (Hixson, Tenn.) brought home the game-tying run with a walk. Bailey Turnbow (Cookeville, Tenn.) broke things open with a two-run single to left field on the next at bat to give the Bucs the 6-4 advantage. Riley Tucker (Mount Pleasant, N.C.) added a pinch-hit, RBI single for good measure to push the lead to 7-4.

The game was far from over however with the Eagles loading the bases with one away. Morehead State trimmed the deficit to just two following a wild pitch. That was as close as the Eagles would get after Whitley Arnott (China Grove, N.C.) slammed the door shut with back-to-back strikeouts to end the scoring threat.

The Bucs put the icing on the cake with three runs on three hits and six stolen bases in the top half of the seventh inning. The first run came from Dunn who stole third and then advanced home following a throwing error by the Eagles. The final two runs came off the bat of Ally Chernak (Ooltewah, Tenn.), her first collegiate base knock, solidifying the 10-5 final score.

Stat of the Game
The Bucs broke a school record in the five-run win over Morehead State, successfully swiping 11 stolen bases to best the previous record of seven set against Temple on Feb. 20, 2010.

Notables
» Eight different Buccaneers were responsible for the 13 hits, led by Turnbow with a career-high three hits and two runs batted in.
» Muir, Dunn and Kelly Warren (Mechanicsville, Va.) each recorded two hits apiece to round out the multi-hit performers.
» Dunn crossed the plate three times to lead the Bucs, notching a career high in runs scored.
» ETSU collected a season-high 13 hits in the win over the Eagles with a season-high 10 runs scored.
» Despite the win and the onslaught, the Bucs left 12 runners stranded and finished 4-of-19 at the dish with runners in scoring position.
» Taylor Boling (Jasper, Ga.) started the game, allowing two runs in three innings of work. Meanwhile Allison Farr (Knoxville, Tenn.) earned the win in relief, yielding three runs (one earned) in 2.1 innings, improving to 2-1 on the season.
» Arnott picked up her first save in a Buccaneer uniform and second in her career, tossing 1.2 innings of scoreless work and tying a season-high in strikeouts with four.
» The Bucs improved to 12-6 all-time against Morehead State, including 5-1 when taking on the Eagles on neutral grounds.

Game 2: Gardner-Webb 3, ETSU 2
Gardner-Webb scored the first two runs of the game in the bottom of the first inning after an RBI double and then a double-play ground out.

ETSU was held hitless until the top of the sixth inning, still trailing 2-0. Cameron Young (Knoxville, Tenn.) led off the frame with a double down the left field line. Three batters later, Young scored from third after a fielding error by the Runnin’ Bulldogs. The Bucs waited until the top of the seventh inning to tie things up after Nayadley began the inning with a leadoff single and advanced to third on a fielding error. Two batters later, Muir lifted a sacrifice fly to right field to even the game at two apiece.

Gardner-Webb had some theatrics of its own in the bottom half of the seventh, connecting on three consecutive one-out singles to load the bases. Arnott entered the game to pitch and was able to induce a force out at home to put two away in the inning with bases still loaded. Unfortunately for the Bucs, there was a passed ball on the ensuing at bat and the Running’ Bulldogs trotted home for the game-winning run.

Notables
» The newcomers accounted for the Buccaneer offense with Nayadley, Tucker and Young accounting for the three ETSU hits.
» Tucker logged a career-high 5.1 innings of work in the circle, yielding two earned runs and three hits in the no-decision effort.
» With the loss, ETSU falls to 15-12 all-time against Gardner-Webb and 5-8 when playing in Boiling Springs.

Up Next
ETSU will close out the Red & Black Classic tomorrow with a doubleheader against Morehead State (10 a.m.) and Gardner-Webb (2 p.m.). Both games will be played at Brinkley Stadium in Boiling Springs, N.C.