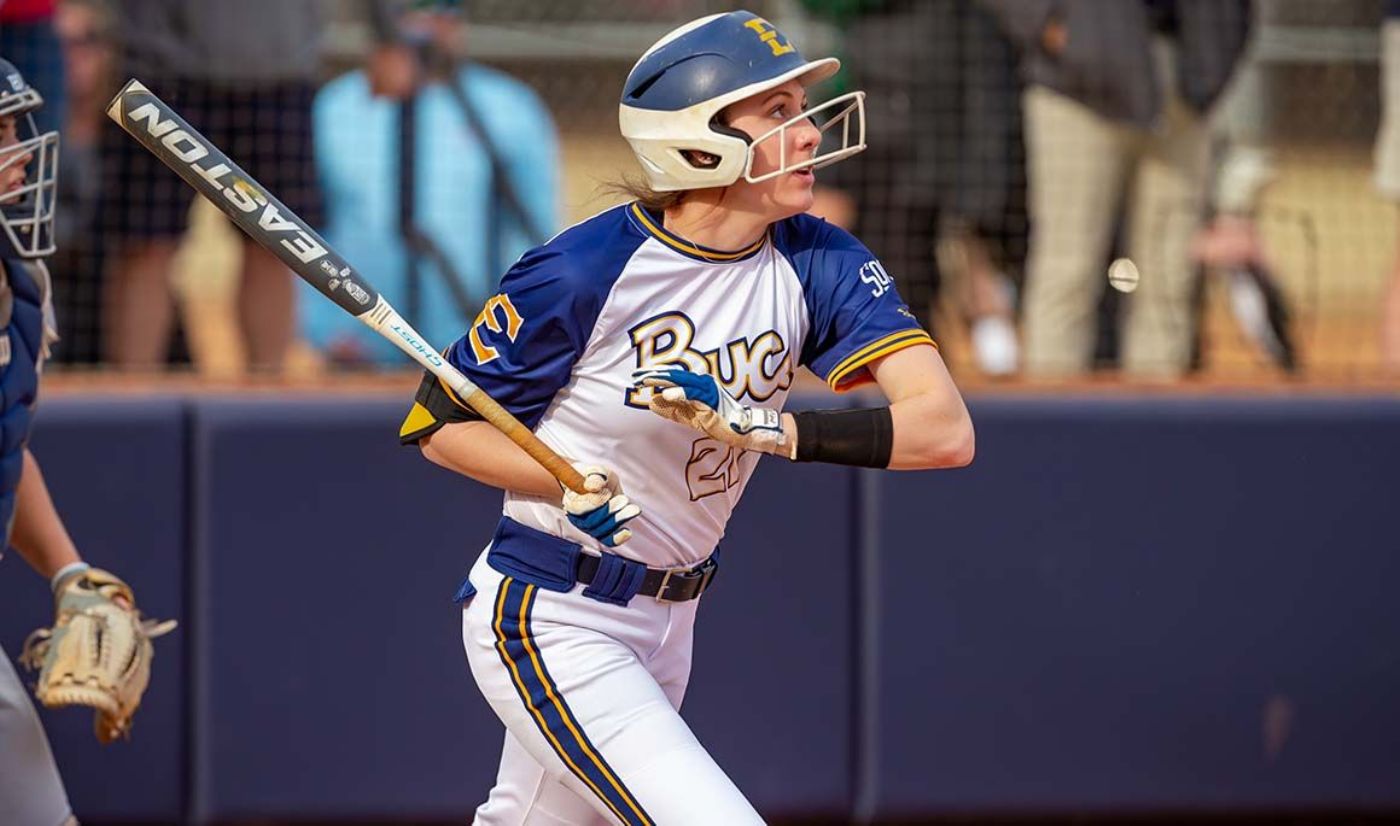 BOILING SPRINGS, N.C. (Feb. 20, 2022) – The ETSU Softball team closed out the Red & Black Classic with a Sunday sweep, defeating Morehead State (6-1) and Gardner-Webb (6-5). With the sweep, ETSU improves to 4-5 on the season after securing three wins in Boiling Springs, N.C.

Game 1: ETSU 6, Morehead State 1
It did not take the Bucs long to crack the scoreboard on Sunday, cashing in on a leadoff walk from Kelly Warren (Mechanicsville, Va.) in the bottom of the first inning. With nobody on and runners on the corners, Riley Nayadley (Ooltewah, Tenn.) attempted to steal second, allowing Warren to trot home for the 1-0 lead. Two innings later, Nayadley aided in another run, this time a sacrifice fly to right field to bring home Warren for the 2-0 advantage.

The Blue & Gold added to the lead in the bottom of the fourth inning, plating three runs on four hits. The Bucs stretched their lead to 3-0 after Andrea Sarhatt (Knoxville, Tenn.) drew a bases-loaded, two-out walk. Warren delivered the punishing blow in the next at bat with a two-run single for the 5-0 advantage. ETSU added one final run to its lead in the bottom of the sixth with a Savannah Ricketts (Hixson, Tenn.) RBI groundout to bring home Peyton Coleman (Alberta, Va.).

Stat of the Game
ETSU pitching buckled down when it needed to, limiting the Eagles’ offense. The trio of pitchers held Morehead State to 2-for-9 with runners in scoring position, stranding nine Eagles on base.

Notables
» Warren was busy at the plate, hitting 3-for-3 with two RBIs, two runs and drawing one walk.
» Six different Bucs accounted for the eight hits, including Coleman who logged her first collegiate base knock with a pinch-hit single in the
sixth.
» Whitley Arnott (China Grove, N.C.) started the game in the circle and threw 3.0 innings and allowed one hit with four strikeouts.
» Riley Tucker (Mount Pleasant, N.C.) and Taylor Boling (Jasper, Ga.) pitched in relief, combining for 4.0 innings with five hits and one run allowed.
» Tucker earned her first career win in the circle, tossing 2.2 innings of scoreless work and allowing three hits. She also had a pinch-hit single to run her hitting streak to three games.
» The Bucs improved to 13-6 all-time against Morehead State, including 6-1 when taking on the Eagles on neutral grounds.

Game 2: ETSU 6, Gardner-Webb 5
Gardner-Webb took an early 1-0 lead after Bridgette Strobl connected for a two-out, RBI single in the bottom half of the first inning.

ETSU took a little time to get things going, waiting until the fifth inning before collecting the first hit of the game. Amber Atkins (South Pittsburg, Tenn.) notched the Bucs’ first hit of the game to get the offense going. Four batters later, Warren brought home both Atkins and Sarhatt with a two-run triple, giving ETSU the 2-1 advantage. On the very next at bat, Warren scored from third after and errant throw from the Runnin’ Bulldogs.

Gardner-Webb wasted no time in responding, reclaiming the lead with three runs of its own in the bottom of the fifth inning to jump ahead 4-3.

The Bucs provided a dramatic finish in the seventh inning, loading the bases with nobody out and down one run. After an infield fly, Alana Collins (Greeneville, Tenn.) tied the game with a sacrifice fly to deep center field. The very next at bat, Sara Muir (Sequatchie, Tenn.) put the Bucs ahead for good with a two-run single through the left side of the infield, providing ETSU with a 6-4 advantage.

The drama was not done there. In the bottom of the seventh, Strobl cut the ETSU lead in half with a one-out double to bring home Baylee Short. Boling settled down to get the final two outs of the contest, aided by a diving catch from Tucker for the 27th out of the ball game and the one-run victory.

Notables
» ETSU was led in hits by Warren with two of the team’s six base knocks.
» Sarhatt finished 1-for-1 at the dish with two runs, one walk and one hit-by-pitch.
» After going hitless through four innings, the Bucs collected six hits and six runs in the final three innings of play.
» Despite being outhit, 8-6, ETSU tied Gardner-Webb in hits with RISP at three apiece; none bigger than Muir’s base hit in the seventh.
» Allison Farr (Knoxville, Tenn.) earned the start in the circle, logging 5.0 innings of work with seven strikeouts and four runs allowed, two earned.
» Boling secured her first win of the season, pitching 2.0 innings of work with two hits, three strikeouts and one earned run allowed.
» Tucker finished 1-of-4 at the dish, running her hitting streak to four games.
» With the victory over the Runnin’ Bulldogs, ETSU improves to 16-12 all-time against Gardner-Webb and 6-8 when playing in Boiling Springs.

Up Next
The Bucs are back in action next weekend in middle Georgia, competing in the I-75 Tournament beginning on Friday, Feb. 25 and concluding Sunday, Feb. 27.