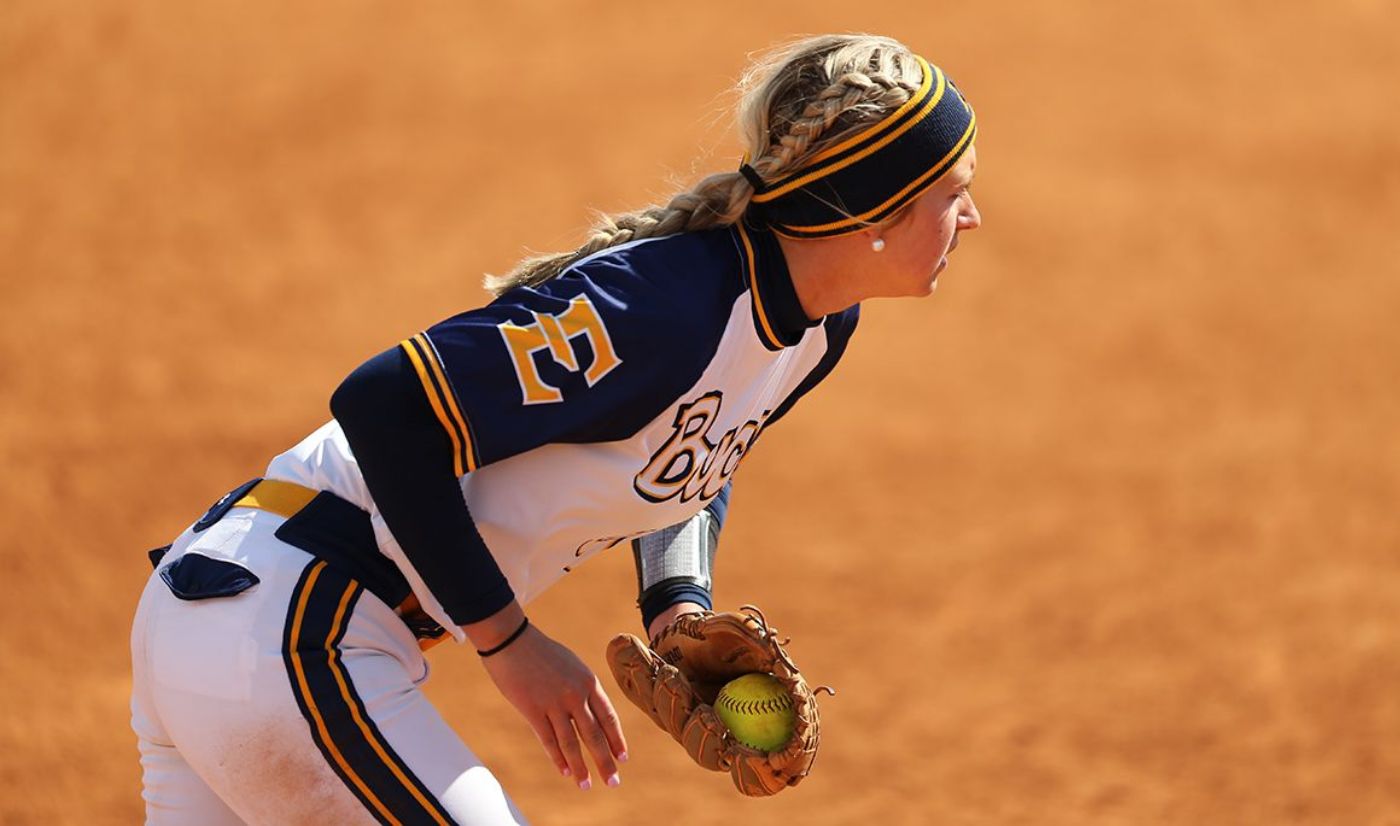 JOHNSON CITY, Tenn. (March 27, 2022) – ETSU Softball watched its 17-game skid go by the wayside on Sunday afternoon, picking up a twin-bill split with Western Carolina. The Bucs claimed the first game of the day with a 3-2 victory before dropping the rubber match, 14-6.

Game 1: ETSU 3, Western Carolina 2
ETSU put the streak behind in the aforementioned pitchers’ duel in game one, jumping ahead in the opening inning following an RBI single from Cameron Young (Knoxville, Tenn.).

Samantha Reele put the Catamounts on top immediately following Young’s RBI single with a two-run blast to left field for the 2-1 advantage.

The score would stay put at 2-1 until a wild fifth inning. Andrea Sarhatt (Knoxville, Tenn.) led the inning off with a triple to right center field. The very next at bat, Sarhatt crossed the plate for the equalizer following a wild pitch. Riley Nayadley (Ooltewah, Tenn.) then jumped on a 2-2 pitch and laced a loud double that hit the top of the fence and fell back into play. After Young moved Nayadley to third with one away, the Catamount defense gifted the Bucs with the go-ahead run. Sara Muir (Sequatchie, Tenn.) lifted a fly ball to center field where it was mishandled, allowing Nayadley to score the go-ahead run from third.

The one-run cushion was all Allison Farr (Knoxville, Tenn.) needed, setting Western Carolina down in order in the sixth and seventh innings for her first career complete game victory.

Notables
» Most notably, the Bucs ended a difficult 17-game losing skid following the win over the Catamounts.
» Young pushed her hitting streak to six games and 13 consecutive games reaching base.
» Farr picked up her third win of the season in the circle and her first collegiate complete game, logging seven innings and striking out four batters in the process.
» ETSU outhit Western Carolina, 9-4, including a pair of hits from both Sarhatt and Muir.
» Farr limited Western Carolina’s potent offense to 0-for-3 with runners in scoring position.
» The Bucs improve to 23-14 all-time against the Catamounts, while improving to 1-1 in SoCon play after game one of Sunday’s doubleheader.

Game 2: Western Carolina 14, ETSU 6 (6 innings)
Game two was an offensive slugfest with the two teams combining for 20 runs and 27 hits. The Bucs jumped on board first with yet another RBI single from Young in the opening inning, bringing home Kelly Warren (Mechanicsville, Va.) for the 1-0 advantage.

Western Carolina came out swinging in the second inning, scoring 10 runs on eight hits, including a pair of homers to take the 10-1 lead.

ETSU did not waver however as Amber Atkins (South Pittsburg, Tenn.) led off the bottom of the second inning with her first NCAA Division I homer to straight away center field. Peyton Coleman (Alberta, Va.) laced an opposite field double to bring home Carolina Davis (Englewood, Tenn.) from second to pull the Bucs within 10-3. Sarhatt and Young added RBI base knocks themselves in the inning, capping off a four-run, six-hit frame to make it a whole new ball game.

However, the Catamounts had other plans in mind, outscoring ETSU 4-1 over the final four inning to put a stop to the Buccaneer comeback. ETSU’s final run was delivered by Sarhatt with a single to right field, plating Coleman from third.

Notables
» Despite the loss, ETSU outhit Western Carolina 14-13, the most hits by the Bucs this season.
» A trio of Bucs recorded three hits apiece as Coleman, Sarhatt and Young combined for nine of the team’s 14 hits – this is the first three-hit performance by Coleman and Young, while marking the second three-hit performance in Sarhatt’s career.
» Young has not hit safely in a career-high seven game, while pushing her on-base streak to a team-best 14 games.
» With the loss in the rubber match, the Bucs drop to 23-15 all-time against the Catamounts, and 1-2 in league play.

Up Next
ETSU will travel to Spartanburg, S.C. for a doubleheader against USC Upstate on Wednesday, March 30 before returning to league play against Chattanooga next weekend in Chattanooga, Tenn.