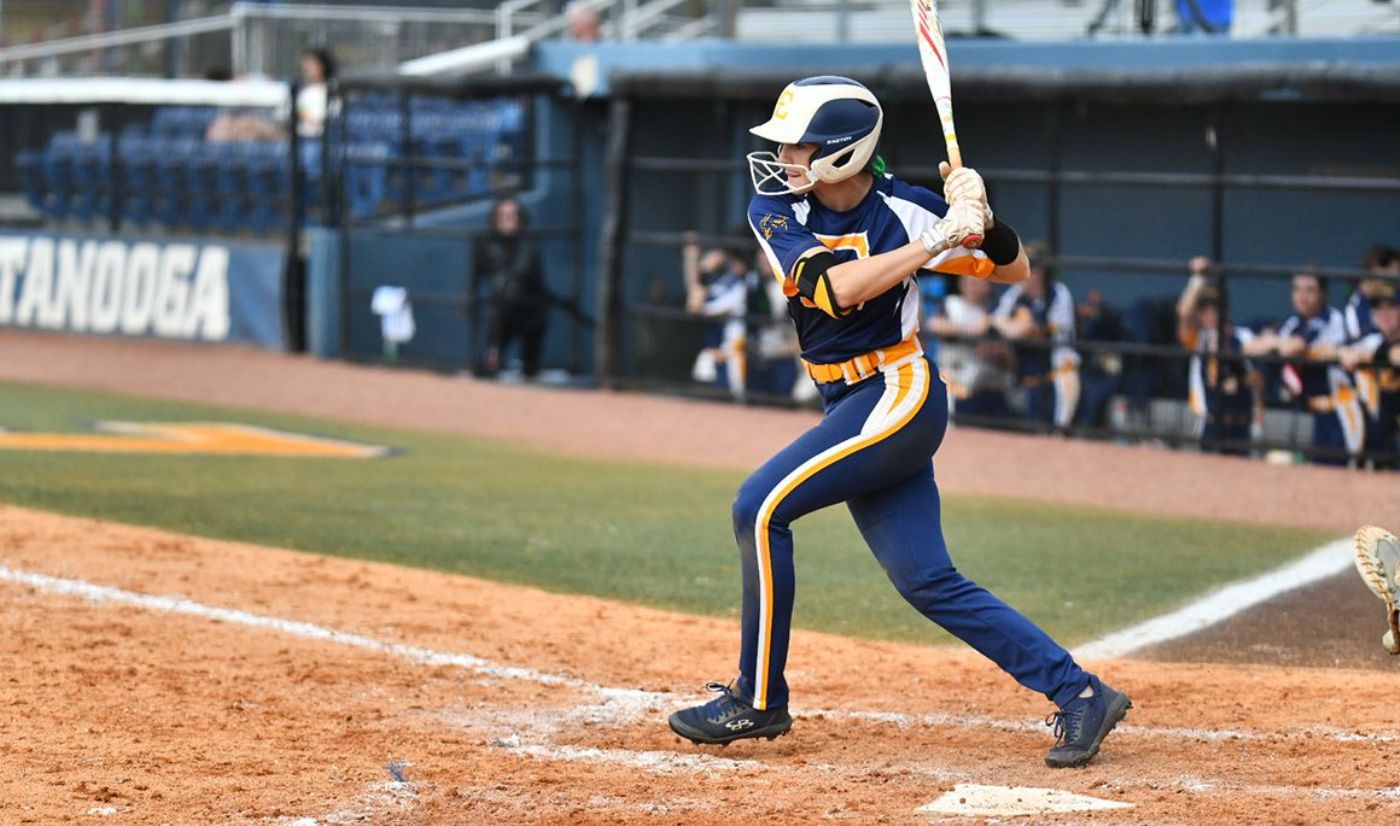 Game 1: Chattanooga 5, ETSU 4 (8 innings)
Game one of Saturday’s doubleheader will echo forever in the series history with the last four innings sending the fans on an emotional roller coaster.

With the Mocs leading 3-0 heading into the fifth inning, the Buccaneer offense came to life beginning with a leadoff single from Carolina Davis (Englewood, Tenn.) to break up the no-hitter. Later with the bases loaded and two outs, Andrea Sarhatt (Knoxville, Tenn.) put the Bucs on the board with a two-run single up the middle to pull ETSU within one run. The very next at bat, ETSU took the lead after Riley Nayadley (Ooltewah, Tenn.) laced a two-run single through the right side of the infield to put the Bucs on top, 4-3.

That score would remain until the bottom of the seventh inning. The Mocs loaded the bases with nobody out to put the fans on the edge of their seats. Presley Williamson roped a hard ground ball to third, sneaking by Cameron Young (Knoxville, Tenn.) for the game-tying run. However, the Mocs tried to walk it off, sending Adison Keylon home. Nayadley corralled the ball and hosed Keylon at the plate. Immediately after, Amber Atkins (South Pittsburg, Tenn.) threw Kaili Phillips out at third from a sitting position, capping off a wild double play. Allison Farr (Knoxville, Tenn.) induced an inning-ending pop up and onto extra innings we went.

ETSU had its chance to score the go-ahead run in the top of the eighth after a Sara Muir (Sequatchie, Tenn.) single, however Young was thrown out sliding into home. Chattanooga took advantage of its opportunity after Emily Coltharp hit a sharp ground ball up the middle with a runner on third, resulting in the 5-4 walk-off single.

Notables
» Seven different players recorded one hit in game one, led by Davis with a 2-for-4 performance.
» Farr started in the circle and walked away with the no-decision, allowing four earned runs and punching out four batters in 7.0 innings.
» Both Sarhatt and Nayadley finished 1-for-4 with two RBIs.
» The Bucs swiped five bags in game one, including two by Young.
» ETSU played in its first extra-inning game of the season, falling to 0-1 in said games.

Game 2: Chattanooga 9, ETSU 4
Game two started a similar way with the Mocs scoring the first run of the game, jumping out to a 4-0 lead after four innings of work.

ETSU trimmed the lead to 4-1 in the top half of the fourth inning after another RBI single by Muir, bringing home Sarhatt in the process. Unfortunately for the Bucs, they surrendered two more runs in the bottom of the inning, falling behind 6-1.

The Blue & Gold did not give up, sending three runs across the plate in the top half of the fifth inning to reset the tone. Kelly Warren (Mechanicsville, Va.) brought home the first run with an RBI ground out to second. The next batter, Sarhatt, delivered a two-out RBI single up the middle to score Ally Chernak (Ooltewah, Tenn.). Later in the inning, ETSU pulled off the perfect double steal with Sarhatt sliding safely into home to pull ETSU within two runs at 6-4.

The Mocs would not let ETSU any closer than that, padding to their lead with three runs in the bottom of the sixth inning to clinch the series with the 9-4 final in game two.

Notables
» ETSU finished game two with six hits, including three hits from Sarhatt to tie her career high.
» With the three hits, Sarhatt has seven multi-hit performances this season, including five in the last seven games.
» The Bucs swiped five more bags, running their season total to 84 – 12 stolen bases shy of breaking the single-season record of 95 (2008).
» With the pair of losses, ETSU falls to 11-31 all-time against Chattanooga and 5-12 when playing at Frost Field.

Up Next
ETSU will look to salvage the series with a win in the finale on Sunday at 2 p.m. in Chattanooga, Tenn.