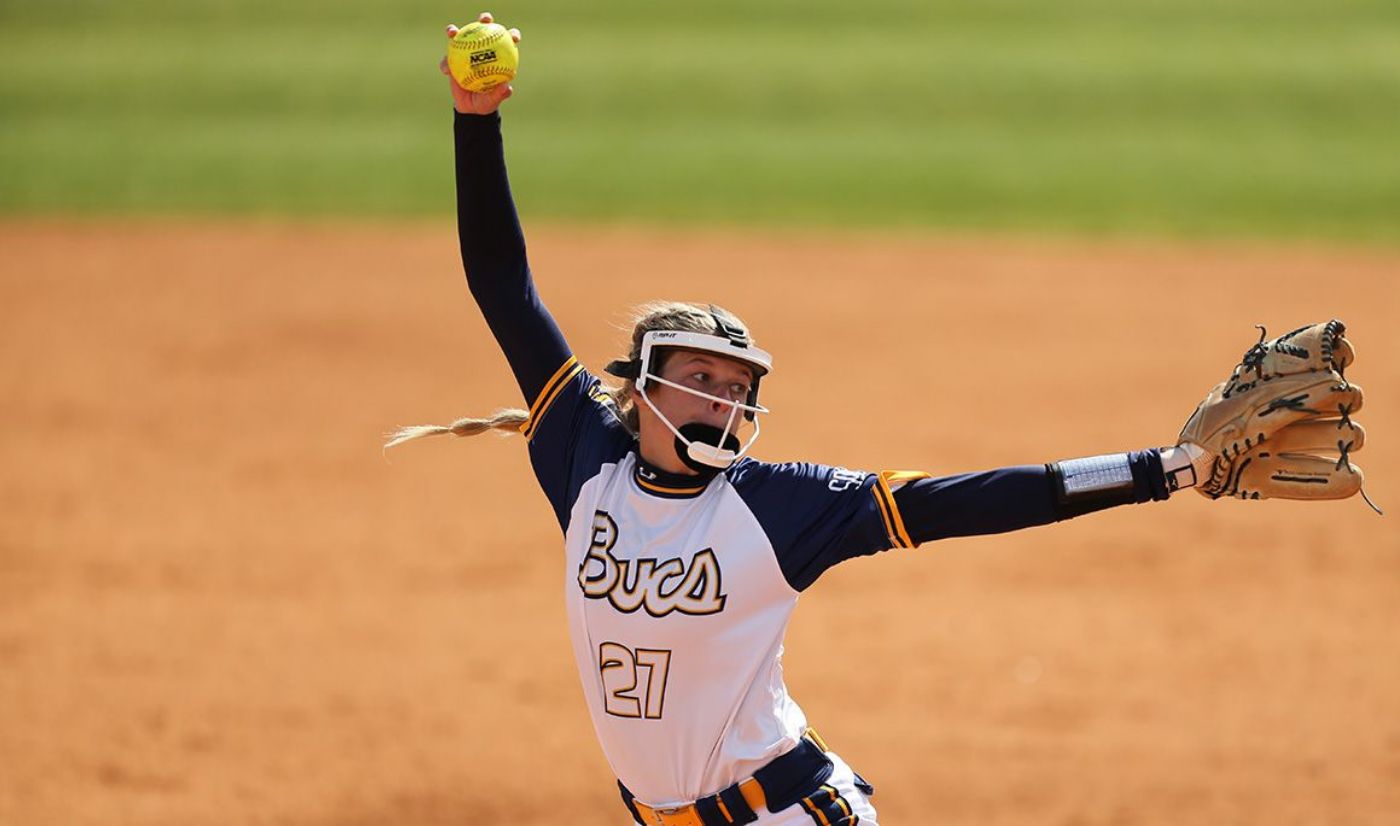 Game 1: N.C. State 5, ETSU 3
It was another close game between the Bucs and the Wolfpack, with N.C. State walking away with a 5-3 win to begin Saturday’s competition. The Wolfpack scored the first four runs of the game, including three runs in the third inning for the 4-0 advantage.

ETSU cut into the deficit in the top of the fourth inning after Andrea Sarhatt (Knoxville, Tenn.) scored on a wild pitch. Sarhatt led off the frame with a triple down the right field line, her fourth of the season.

The Bucs did not fold, plating two runs in the top of the sixth to add pressure on the N.C. State pitcher. Sara Muir (Sequatchie, Tenn.) brought home Sarhatt with an infield single, followed by an RBI single off the bat of Carolina Davis (Englewood, Tenn.) to bring home Riley Nayadley (Ooltewah, Tenn.).

ETSU was unable to trim further in to the lead as the Wolfpack held the Bucs’ offense at bay in the top half of the seventh.

Notables
» For the second consecutive game against N.C. State, the Bucs outhit the Wolfpack, 7-5.
» Allison Farr (Knoxville, Tenn.) dropped to 3-10 in the circle, giving up five runs (three earned) and striking out six batters in 5.0 innings.
» Sarhatt and Peyton Coleman (Alberta, Va.) combined for five of the team’s seven hits, with Sarhatt leading the way with three base knocks.
» ETSU finished 2-for-6 with runners in scoring position, while N.C. State was held to 3-of-13.
» The Bucs fall to 0-2 all-time against N.C. State following the loss.

Game 2: South Carolina 6, ETSU 2
The Gamecocks put three runs on the board in the bottom of the first inning, recording two hits while the Bucs walked two batters and plunked two more.

ETSU cut into the deficit when Cameron Young (Knoxville, Tenn.) scored from third while Davis was caught in a rundown.

South Carolina padded its lead in the bottom of the second inning with a two-run triple off the bat of Maddie Gallagher for the 5-1 advantage. The Gamecocks crossed the plate one final time in the bottom of the third when Emma Sellers laced a solo blast to left center.

The Bucs put together four hits in the top of the seventh inning for one final attempt at a rally. With bases loaded and one out, Ally Chernak (Ooltewah, Tenn.) lifted a fly ball that dropped for a single in right field, bringing home Muir from third. The Bucs were unable to add any more runs, dropping the 6-2 conclusion in the weekend finale.

Notables
» Eight different Bucs tallied a hit in the tournament finale, including Savannah Ricketts (Hixson, Tenn.) who picked up her first collegiate base knock.
» Sarhatt finished with two hits, her second multi-hit game of the tournament – Sarhatt finished 6-for-13 during the Garnett and Black Round Robin.
» ETSU is now 0-6 all-time against the Gamecocks following the loss.
» With the pair of losses, ETSU has now dropped 12 consecutive games and now falls to 5-34.

Up Next
ETSU is back in Southern Conference action next weekend as the Bucs welcome UNCG to town for a three-game series beginning with a doubleheader on Friday, April 15 at 1 p.m.