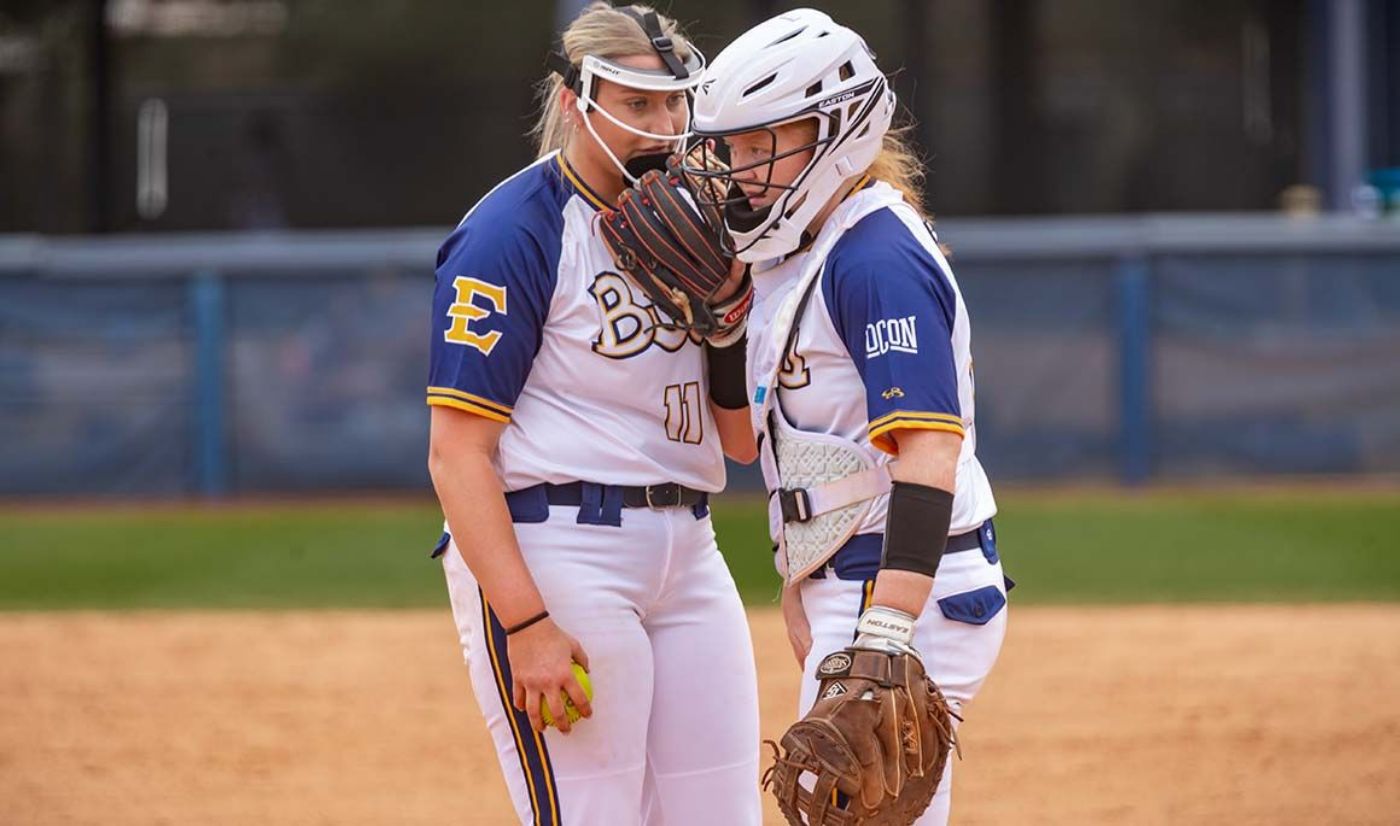 JOHNSON CITY, Tenn. (April 15, 2022) – The Buccaneer Softball team played in front of the home faithful for the first time in nearly three weeks as ETSU hosted UNCG in a Southern Conference doubleheader. The Bucs walked a total of 17 batters today and hit three more in the doubleheader loss, falling to 1-7 in league play.

Game 1: UNCG 3, ETSU 2
The Spartans were the first to strike in game one of the series, scoring a pair of runs in the bottom of the second inning thanks to a bases-loaded hit by pitch and a bases-loaded walk. Two innings later, UNCG added to its lead with a solo homer to right field off the bat of Makenna Matthijs.

ETSU got the run back in the bottom of the fourth when Ally Chernak (Ooltewah, Tenn.) reached base safely following a UNCG error at shortstop. Cameron Young (Knoxville, Tenn.) scored safely from third following the error, trimming the Spartans’ lead to 3-1.

Down but not out in the bottom of the seventh, the Bucs cut into the lead even further when Amber Atkins (South Pittsburg, Tenn.) launched her second homer of the season, a no-doubt solo blast over the left field fence. Young appeared to keep the two-out rally going in her at bat until a diving play was made by Grace Loftin to end the game.

Notables
» ETSU outhit UNCG in game one 5-4, the third consecutive game where the Bucs outhit their opponents.
» Allison Farr (Knoxville, Tenn.) threw her third complete game of the season, falling to 3-11 after allowing three runs on four hits.
» Farr also struggled early on finding the strike zone, walking a career high 10 batters – she also struck out five in the process.
» UNCG left 11 runners on base and batted 0-for-6 with runners in scoring position.
» Riley Nayadley (Ooltewah, Tenn.) led the team in hits in game one with two, her third multi-hit game of the season.

Game 2: UNCG 6, ETSU 1
The first four innings zipped by in game two as both teams were scoreless through four frames of work with five combined hits.

UNCG changed that narrative in the top half of the fifth inning when Brooklynn Maxwell lifted a sacrifice fly to center field for the 1-0 lead. Two batters later, Loftin launched a three-run blast to extend UNCG’s lead to 4-0. On the very next pitch, Jordan Gontram got ahold of one and sent the ball over the left center field fence and just like that, it was 5-0 in favor of the Spartans.

Notables
» Sarhatt led the Bucs in hitting in game two with two base knocks, her ninth multi-hit game of the season.
» Sarhatt, Nayadley and Atkins each recorded a hit in both games today with Atkins tying her season-high in hitting streak at three and Nayadley tying hers at two.
» MacKenzie Dyson (Hanahan, S.C.) picked up the loss, allowing six runs (five earned) in 2.0 innings of work.
» Both Whitley Arnott (China Grove, N.C.) and Sara Muir (Sequatchie, Tenn.) pitched scoreless outings, combining for 5.0 innings of work and surrendering just three combined hits.
» Between the two games, ETSU swiped five total bases, bringing the season total to 93 – just two shy of tying the all-time single-season ETSU record of 95 set in 2008.
» ETSU is now 9-32 all-time against UNCG following the pair of losses today.
» With the pair of losses, ETSU has now dropped 14 consecutive games and falls to 5-36 on the year.

Up Next
ETSU will close out the three-game series against UNCG on Saturday with the first pitch starting at 1 p.m. (weather pending).