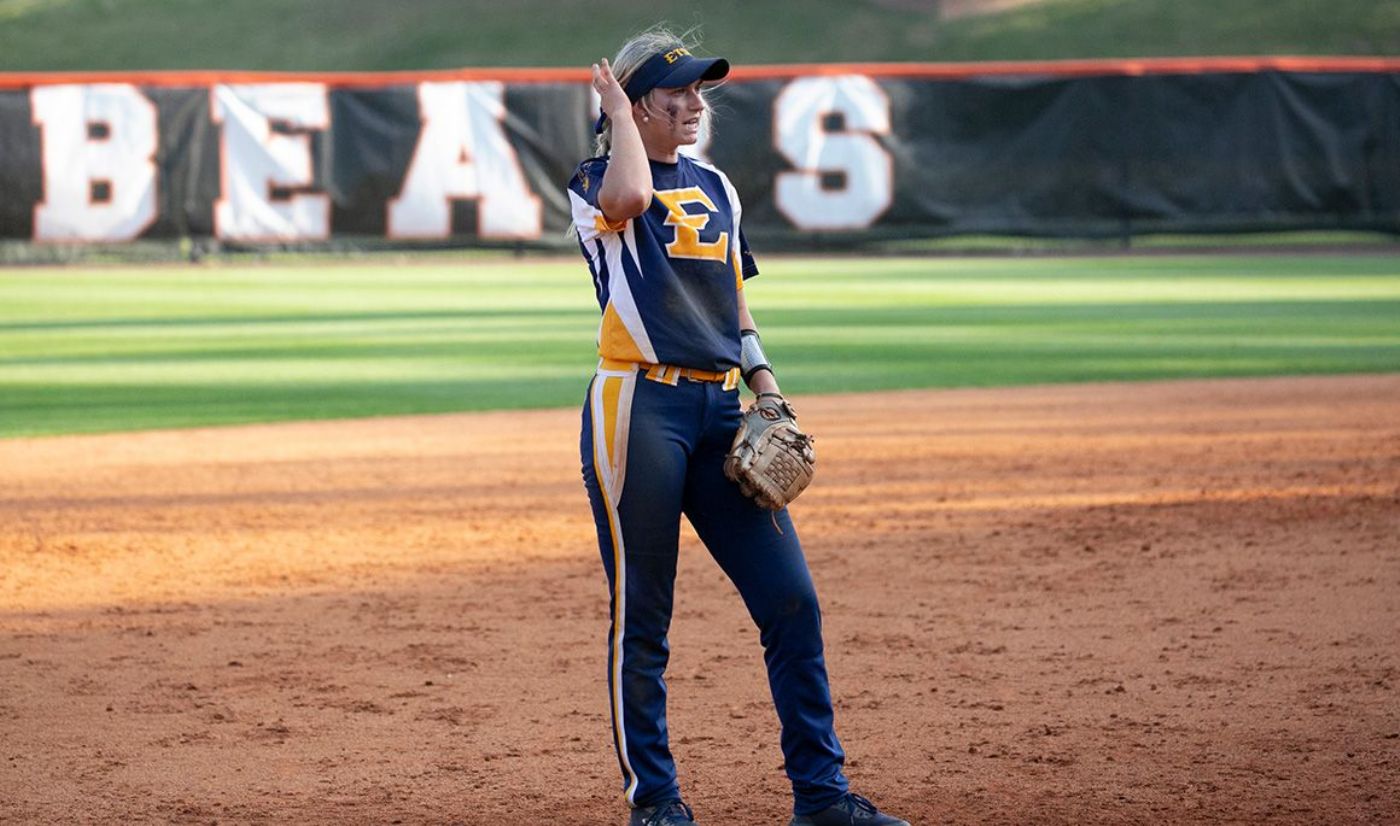 MACON, Ga. (April 23, 2022) – It took 19 total innings of softball action to determine the winner of both games today as ETSU and Mercer split the Saturday doubleheader in Macon, Ga. The Buccaneers came away victorious in the first game, 3-2, before dropping a 2-1 decision in game two.

Game 1: ETSU 3, Mercer 2 (10 innings)
The Bears opened the scoring in game one in the second inning when Adele Braun connected for a solo blast, providing Mercer with the early 1-0 advantage.

The one-run Mercer lead held until the top of the seventh inning when the Bucs rallied to tie things up at one apiece. With runners on second and third and nobody out, Riley Nayadley (Ooltewah, Tenn.) elevated a sacrifice fly to left field, bringing home Cameron Young (Knoxville, Tenn.) who led off the inning with a single.

Two innings later, ETSU took its first lead of the game when Young score from second following a throwing error by Mercer’s shortstop.

The Bears halted ETSU’s game-winning celebrations in the bottom of the ninth inning, scoring on a bases-loaded walk to even the game back at 2-2.

Now in the 10th inning and the international rule in play, Bailey Turnbow (Cookeville, Tenn.) was placed on second to start the inning. Turnbow immediately stole third and scored on an errant throw, putting the Bucs back on top, 3-2. This time, the one-run lead stuck after Allison Farr (Knoxville, Tenn.) recorded the first two outs and Whitley Arnott (China Grove, N.C.) slammed the door shut for her second save of the season.

Notables
» Farr pitched a gem for her fourth win of the season, logging a career-high 9.2 innings of work and allowing just two runs, while striking out six batters in the process.
» A trio of Bucs recorded two hits on the evening: Kelly Warren (Mechanicsville, Va.), Young and Sara Muir (Sequatchie, Tenn.).
» With the win, ETSU halted its 17-game losing skid and improve to 2-8 in league action.
» The 10-inning victory was the longest game for the Bucs since dropping a 3-2 decision to Chattanooga last year in 11 innings.
» The 3-2, 10-inning win is the first extra-inning victory for the Bucs since taking down Radford on March 16, 2021 in 10 innings by the final of 4-2.

Game 2: Mercer 2, ETSU 1 (9 innings)
Neither team could crack the scoreboard in the first five innings, combining for just three hits in the first five frames. All of that changed in the top of the sixth inning when Young notched an RBI single to left field, bringing home Warren from second. The Bucs had a chance to add to its lead with bases loaded and two away but could not capitalize.

Mercer knotted things up in the bottom of the sixth inning when Annie Potter brought home Elisa Rosado from third with a sacrifice fly. The Bears nearly captured the game in the bottom of the seventh inning, but heads up fielding by Nayadley kept the score tied at 1-1 as she hosed Kenlie Harvey at the plate. Two batters later and the bases juiced with two away, Muir sent the game into extras after punching out Madison Headley to end the inning.

ETSU’s first real extra-inning scoring threat was in the top of the ninth when Carolina Davis (Englewood, Tenn.) roped a two-out triple off the right center field fence. Unfortunately, the Bucs were unable to bring home the go-ahead run.

Mercer took advantage of the missed opportunity in the bottom of the ninth inning after Alyssa Woods hit a walk-off double to right center field to even the series following the 2-1 advantage.

Notables
» Arnott had one of her best outings in a Buccaneer uniform despite picking up the loss, logging a career-high 6.0 innings of work with five strikeouts and allowing just one earned run.
» Five different Buccaneers collected one hit in the game, with Young posting the lone RBI.
» With the split, the Bucs are now 17-27 all-time against Mercer, including 4-13 when playing in Macon.

Up Next
The two teams will duke it out for the series in the rubber match tomorrow at 1 p.m. at Sikes Field in Macon, Ga.