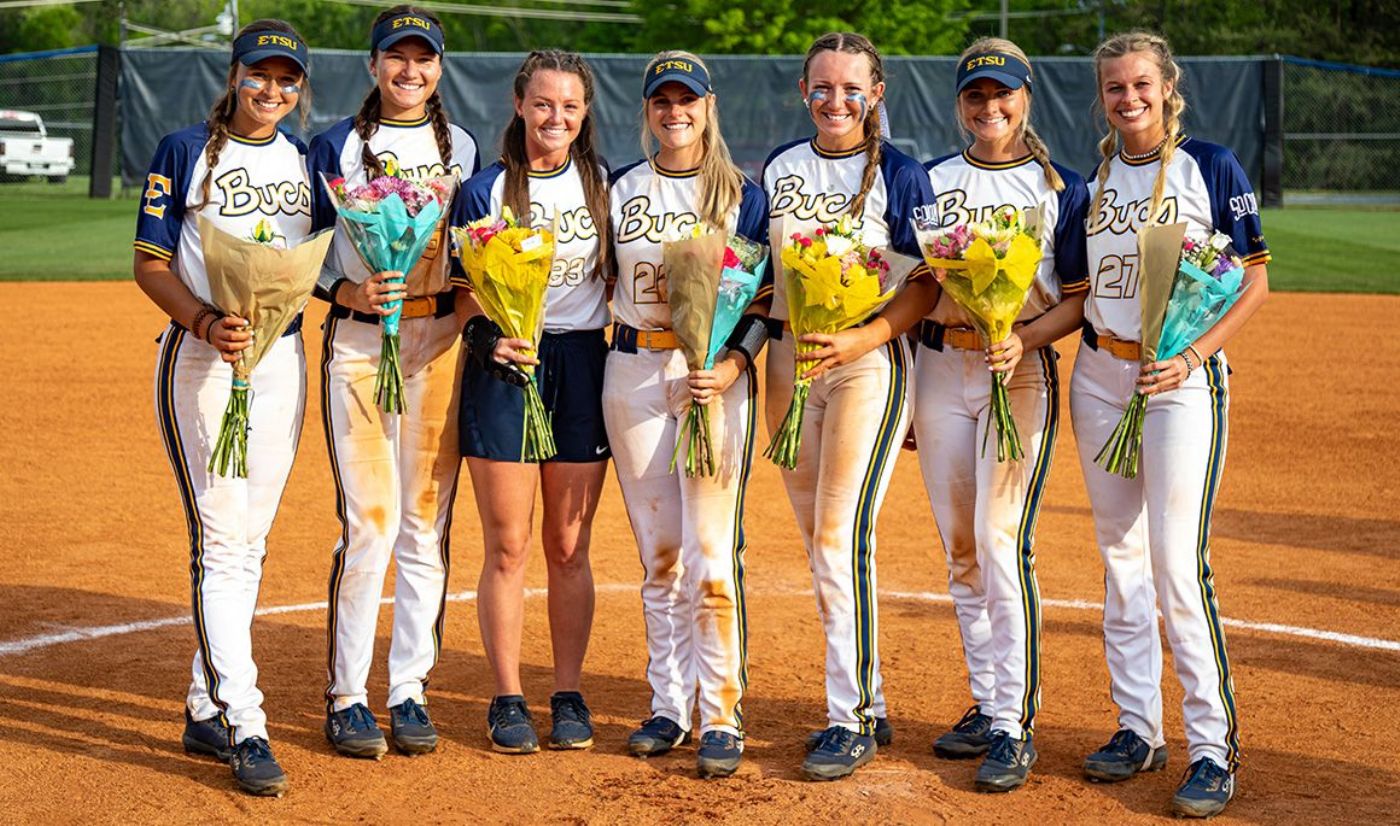 JOHNSON CITY, Tenn. (April 30, 2022) – It was another pair of tightly-contested games for ETSU Softball as the Bucs dropped two Southern Conference battles against Samford on Saturday at Betty Basler Field. The Bucs honored seven seniors following game two against the Bulldogs.

Game 1: Samford 3, ETSU 1
The first three innings witnessed just two hits apiece for both sides, with neither team cracking the scoreboard. The Bulldogs jumped on the board first in the top of the fourth inning when M.K. Tedder roped her sixth homer of the season, a solo blast over the left center fence. Samford doubled its lead to 2-0 with another solo shot, this time off the bat of Kolby Holcombe. The visiting squad scored its final run of the game in the top of the seventh inning when Timberlyn Shurbutt connected on an RBI single up the middle for the 3-0 advantage.

The Bucs were down but not out when Amber Atkins (South Pittsburg, Tenn.) roped an RBI double off the left center wall, bringing home Riley Nayadley (Ooltewah, Tenn.) from first to trim the deficit to 3-1 with one away. After a single by Carolina Davis (Englewood, Tenn.) and a throwing error, the Bucs had runners on second and third with one out. However, ETSU was unable to cut further into the lead, going two-up and two-down to conclude the game with a 3-1 loss.

Notables
» In game one, the Bucs swiped two bases to run their season total to an even 100 stolen bases on the season.
» Five different Buccaneers recorded at least one hit, led by Nayadley and Davis with a two-hit performance.
» Three of the four seniors that registered an at-bat in game one came away with at least one base knock.
» Despite pitching well, Allison Farr (Knoxville, Tenn.) picked up the loss after allowing two earned runs in 5.0 innings, while striking out three batters.
» Senior pitcher, MacKenzie Dyson (Hanahan, S.C.) made her first appearance in the circle in two weeks, yielding one run in 2.0 innings of action.

Game 2: Samford 7, ETSU 3 (8 innings)
It was the same script in game two as neither side could find any rhythm on the offensive front through three innings of play. Just like game one, the Bulldogs scored the first three runs, plating one run in each of the fourth, fifth and sixth innings. In similar fashion, two of the three runs came off of solo blasts from the Samford offense.

The Bucs showed their grit again in game two, bending but not breaking as ETSU rallied in the sixth inning. The Blue & Gold scored their first run of the game when Sara Muir (Sequatchie, Tenn.) brought home Kelly Warren (Mechanicsville, Va.) with an RBI single in the bottom of the sixth inning. In the next at bat, Cameron Young (Knoxville, Tenn.) elevated a sacrifice fly to left field, bringing home Andrea Sarhatt (Knoxville, Tenn.) and trimming the Buccaneer deficit to just one. Nayadley kept the offense going with a single over second base, putting Muir in scoring position with two away. Atkins delivered the game-tying knock with an RBI single to right center, bringing home Muir from second to knot the game at 3-3. ETSU had its chance to jump ahead with runners in scoring position, but struck out in the final at bat of the sixth inning.

After a scoreless seventh inning, the Bucs found themselves playing extra innings for the third time in the last five conference games.

The Bulldogs played spoiler to the Senior Day celebration in the top of the eighth inning, scoring four runs on two hits and two ETSU errors. Trailing 7-3 going into the bottom of the eighth, ETSU was only able to muster together one hit, settling for the four-run loss.

Notables
» ETSU battled and had six hits in the final three innings, including five hits in the bottom of the sixth.
» The Bucs finished with eight hits in game two, led by Muir and Atkins with two apiece.
» Whitley Arnott (China Grove, N.C.) started the game in the circle, throwing 5.0 innings and allowing two earned runs, while striking out four.
» ETSU falls to 1-3 on the season when playing extra-inning contests this season.
» With the doubleheader loss, the Bucs fall to 6-16 all-time against Samford, including 2-5 when playing in Johnson City.

Up Next
ETSU and Samford will close the three-game series tomorrow with a single game at Betty Basler Field at 1 p.m.