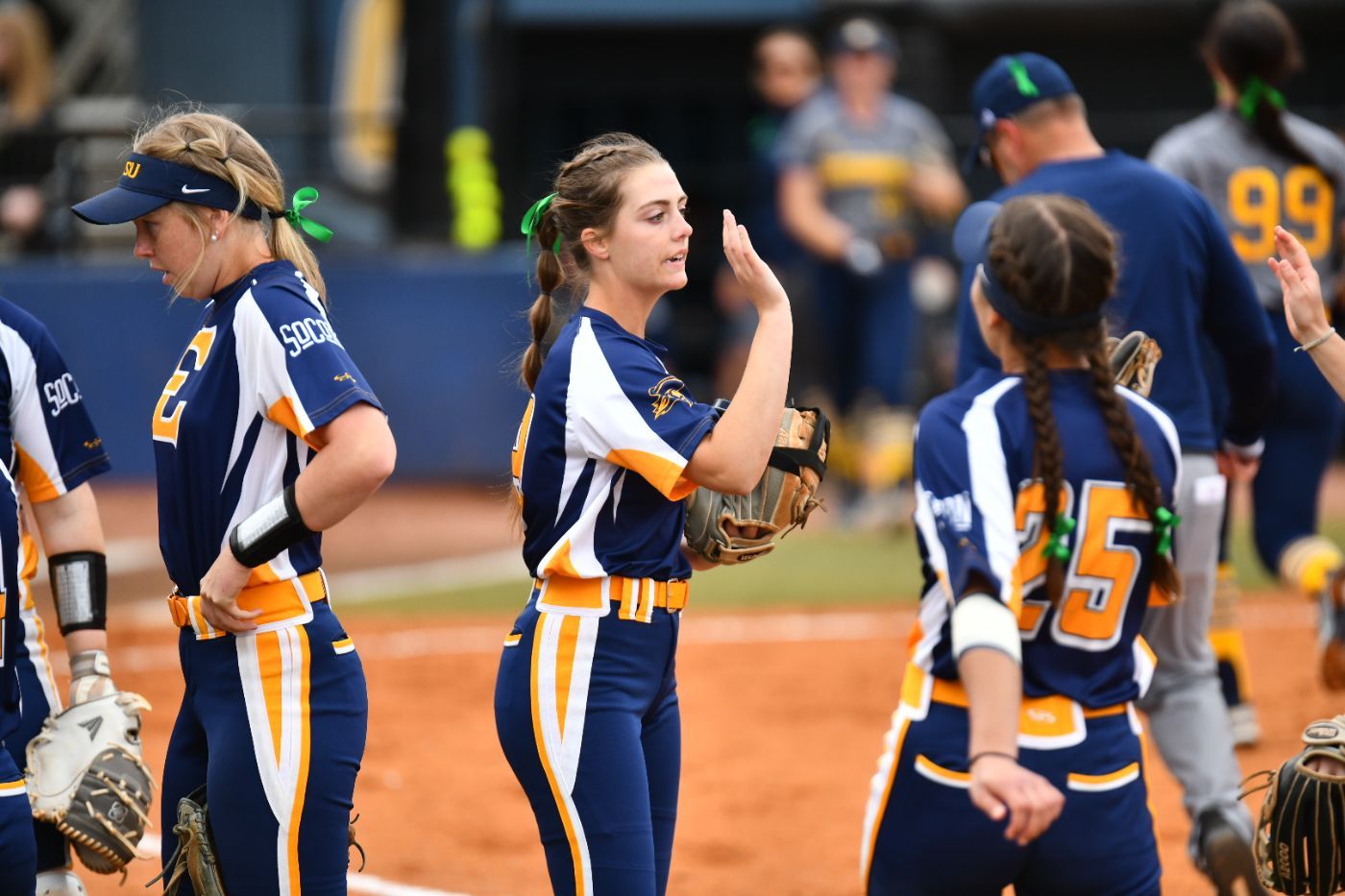 Greenville, S.C. (May 7, 2022) – ETSU Softball jumped back into the win column on Saturday with a pair of wins at Furman, locking up the first Southern Conference series in favor of the Blue & Gold since sweeping Western Carolina in three games in 2019. The Bucs have been edging closer and closer in conference games and on Saturday, all of the timely hitting and the calls went in favor of ETSU.

Game 1: ETSU 4, Furman 2
The Paladins scored the first two runs of game one in the bottom of the third inning with a pair of sacrifice flies for the early 2-0 advantage.

ETSU began to piece together its offense in the fourth inning, beginning with a leadoff single by Kelly Warren (Mechanicsville, Va.) for the team’s first hit. Three batters later, Warren scored from third following an RBI ground out from Cameron Young (Knoxville, Tenn.) to put the Bucs on the board.

ETSU carried the momentum into the fifth inning having lifted the lid off both the no-hitter and the shutout in the fourth frame. With two outs and a runner on second, Ally Chernak (Ooltewah, Tenn.) picked up her biggest hit of the season with an RBI single through the right side, bringing the tying run home. Two batters later, with Chernak on third and Warren on second, Andrea Sarhatt (Knoxville, Tenn.) delivered the go-ahead base knock with a hard single to center field. Sarhatt’s hit brought home both Chernak and Warren as the Bucs polished off their fourth unanswered run of the game.

ETSU’s defense shined the rest of the way, including an inning-ending double play in the fifth to preserve the two-run advantage. Allison Farr (Knoxville, Tenn.) had a strong finish down the stretch, striking out a pair of batters in the sixth inning and then inducing a ground out and a harmless pop fly with runners on in the seventh to cap off her fifth win of the season.

Notables
» Farr shined in her fifth win of the year, allowing just two runs and striking out four batters for her fourth complete game this year.
» Farr also held the Paladins to 0-for-3 with runners in scoring position, stranding six base runners during the win.
» Warren, Sarhatt and Atkins each finished the game with two hits, combining for six of the team’s eight base knocks.
» For the fifth time this year, ETSU claimed the win when trailing heading into the fifth inning.
» With her two RBIs, Sarhatt ties Warren for the most multi-RBI games this year with three, while also logging her 10th multi-hit game this season – Warren extends her multi-hit game performance to 15.
» Following the win, the Bucs tied last season’s SoCon win total with three.

Game 2: ETSU 5, Furman 3
ETSU wasted no time in game two, jumping on to Furman’s pitching early in the first inning. After Warren and Sarhatt started the game off with a pair of singles, Sara Muir (Sequatchie, Tenn.) drove them in with a two-run single to right center field for the early 2-0 lead. Three batters later, Amber Atkins (South Pittsburg, Tenn.) jumped all over a pitch, sending a one-out double off the center field fence to bring in two more Buccaneer runs for the 4-0 lead.

The Paladins responded in the bottom of the first inning, loading the bases with one out to force MacKenzie Dyson (Hanahan, S.C.) out of the game. Whitley Arnott (China Grove, N.C.) entered in relief and held Furman to just one run, a fielder’s choice groundout.

ETSU attempted to add an insurance run in the top of the third inning with bases loaded and one down. However, Furman pitched out of the jam as the Bucs popped up into an inning-ending double play. The Paladins had similar fate in the bottom of the third inning, loading the bases with two outs. However, Arnott slammed the door shut with a strikeout to preserve the 4-1 lead.

The game would remain a three-run ETSU advantage until the top of the seventh inning when Sarhatt singled to shortstop and Chernak displayed heads up base running, scoring from second for the insurance run.

Furman was down to its final out in the seventh inning but would not fold as Emily Bartlett launched a two-run homer to left field to cut into the ETSU lead. Caitlin Goldwait singled in the next at bat to add pressure to the Bucs. However, Arnott got the ever-dangerous Natalie Morgan to ground out to secure her first NCAA Division I win.

Notables
» Arnott picked up her first win in an ETSU uniform, logging a career-high 6.2 innings of work and limiting Furman to just two runs.
» With the win, ETSU surpassed last year’s SoCon win total with its fourth win, while also earning the first SoCon series win for the Bucs since defeating Western Carolina in 2019 – COVID-19 wiped out the 2020 SoCon slate.
» Timely hitting has eluded the Bucs this season until today as ETSU batted .400 with runners in scoring position in game two.
» Both starting pitchers exited early, with each one lasting 0.1 inning of action.
» ETSU finished the game with 10 hits, led by Sarhatt and Riley Nayadley (Ooltewah, Tenn.) with two hits each.
» With her two RBIs, Muir joins Warren and Sarhatt with three multi-RBI games this season – Atkins picks up her first career multi-RBI game in a Buccaneer uniform.
» With the pair of wins, ETSU improves to 30-24 all-time against the Paladins, including 16-9 in Greenville.

Up Next
The Blue & Gold will close out the 2022 regular season with the series finale against Furman tomorrow at 1 p.m. at Pepsi Stadium.