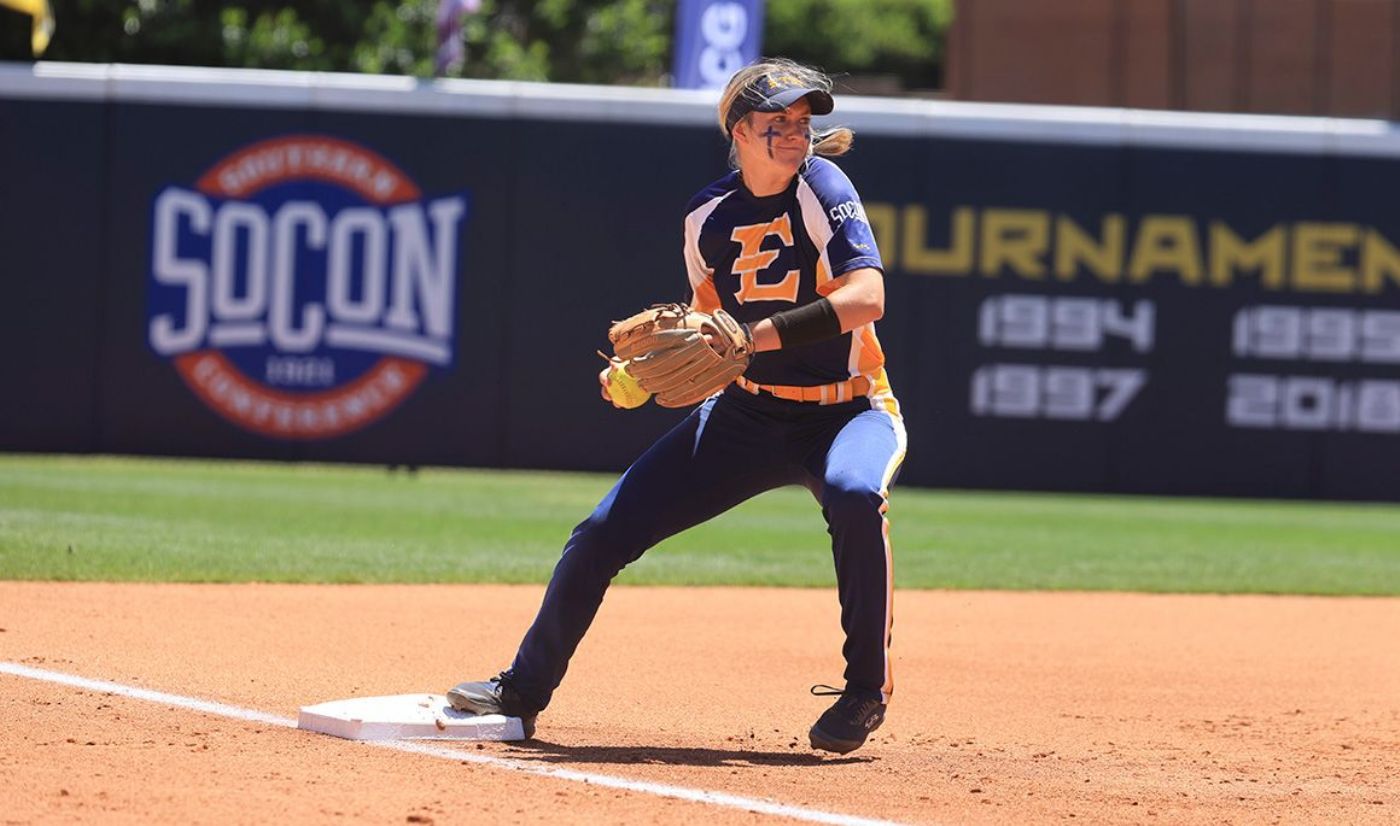 Softball Drops Game One in Extras
ETSU at Samford | May 11, 2022
Related Links

GREENSBORO, N.C. (May 11, 2022) – Despite outplaying Samford in all aspects of the game, ETSU Softball drops game one of the Southern Conference Championship in extra innings by the final of 4-3. The Bucs had costly errors in the sixth and the ninth innings, resulting in Samford scoring the game-tying and the go-ahead runs to steal game one from the Bucs.

After a quiet first inning, ETSU cracked the scoreboard in the top half of the second inning with a pair of runs on two hits. Cameron Young (Knoxville, Tenn) led off the inning with a double in the gap, later advancing to third following a single by Amber Atkins (South Pittsburg, Tenn.). In the very next at bat, Carolina Davis (Englewood, Tenn.) dropped down the perfect sacrifice squeeze to bring Young home for the first run of the game. With runners on the corners and one down, Davis took off for second and Samford mishandled the throw to the cut off, allowing Atkins to score from third for the 2-0 advantage.

The Bulldogs immediately responded in the bottom half of the second inning when Amanda Briskin hit against the shift, reaching on an infield single to bring home Merritt Cahoon from third.

ETSU doubled its lead back to two runs in the top of the third inning. After Kelly Warren (Mechanicsville, Va.) singled to second, her fellow outfielder Andrea Sarhatt (Knoxville, Tenn.) placed a double in the gap and the speedy Warren scored from third to push the lead to 3-1.

Samford cut the ETSU lead in half yet again, this time in the fourth inning when Gwynnie Hornibrook led off the frame with a solo homer to left field. Two innings later, the Bulldogs were gifted the game-tying run in the bottom of the sixth. After Cahoon was walked, Hornibrook reached on an ETSU fielding error that was then thrown into the outfield. The return throw from the outfield was thrown to third with nobody covering, allowing Samford to score on a wild two-error play. The Bucs were able to regather composure and get out of the rest of the inning with just the one run allowed.

The Bulldogs had a chance to walk it off in the bottom of the seventh but Whitley Arnott (China Grove, N.C.) would not let that happen. With runners on second and third and one away, Arnott induced a pair of pop ups that did not leave the infield, holding Samford scoreless as the teams found themselves playing extra innings for the second time in the last three meetings.

Samford put pressure on the Bucs’ defense in the bottom of the ninth inning with back-to-back singles to open the inning. The very next batter laid down a bunt and the ball was thrown away into the outfield, allowing Briskin to score from second for the game-winning run.

Notables
» The Bucs outhit Samford by the final of 9-6 with seven different batters accounting for the nine hits – Atkins led the way with a career-high three hits.
» All three of ETSU’s All-SoCon honorees came away with at least one hit in the opening game.
» The Bucs finished 1-for-6 with runners in scoring position, while Samford batted 1-for-12 in said situations.
» Arnott pitched the final six innings and was tacked with another tough loss, yielding three runs (one earned) in 6.0 innings of play.
» The Bucs held the SoCon Player of the Year (MK Tedder) to 0-for-2 at the plate, while scoring three runs and recording eight hits off the SoCon Pitcher of the Year (McKenzie Newcomb).

Up Next
ETSU drops to the elimination bracket and will play tomorrow morning at 10 a.m. against the loser of No. 3 seed Chattanooga and No. 6 seed Western Carolina.