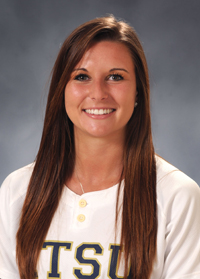 2014: Appeared in 22 games and made 13 starts on the mound... Pitched 75 and one-third innings, striking out a career-high 29 batters, and limiting opponents to a .294 batting average... Started on back-to-back days versus Northern Kentucky (3/29 & 3/30), tossing 10 and two-third innings and allowing and allowing just one earned run while striking out six.

2012:  Appeared in 14 contests and made four starts in the circle... threw 46.0 innings with a 4-1 record and 20 strikeouts... earned her first career win as she threw 4.2 relief innings and only allowed three hits and a run vs. Nicholls State (Feb. 18)... threw a complete game one-hit shout-out against Wagner (March 10)... struck out a season-best three vs. Western Carolina (Feb. 12) in her three innings of relief.

Prior to ETSU:  A very athletic player where she lettered in softball, volleyball, and basketball at Jefferson County High School... the Dandridge, Tenn. native will see time in the outfield, but she can also give depth to the Buccaneer pitching staff... Leon carried a winning resume with her as she helped steer the Patriots to a 2010 district championship, while finishing fourth in the state tournament... compiled numerous accolades, which includes three-time District II AA All-Tournament Team selection, IMAC Pitcher of the Year, and a three-time all-conference selection... including her success at the high school level, Leon also played for the White Lightning club team based out of Knoxville.