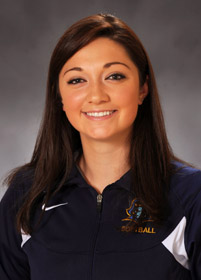 High School:  A middle infielder where she lettered at Prince Avenue Christian School … hit .382 with eight doubles, three triples, and 29 RBI for the Wolverines in her senior season … Thompson and the Wolverines enjoyed a lot of success on the diamond as they won three regional championships and finished third in the state championship in the fall of 2010 … was named Regional Player of the Year from 2008-10 and was selected First Team All-State as a senior … also played for the Georgia Knockouts Gold.