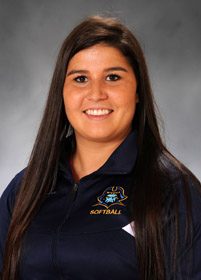 2011 Season:  Named Atlantic Sun All-Academic and Atlantic Sun Conference Scholar … started in 34 of her 41 games played (all starts were in left field) … registered three multi-hit games and drove in two or more runs twice during her sophomore season … reached base safely in four consecutive games from 3/12-21 … was a perfect 3-for-3 with a pair of doubles and RBIs vs. North Carolina A&T … went 2-for-3 with an RBI and two runs scored in the 12-4 win over Furman on 4/19.

2010 Season:  Played in 21 games, while making three starts … registered first collegiate hit in first-ever start vs. Presbyterian on 3/20 … was 3-for-3 in stolen bases.

High School:  Brings a lot of speed to the Lady Bucs and was a four-year letterwinner at South Gwinnett High School … had been a starting outfielder since her freshman year at South Gwinnett, and led the Comets in every offensive category as a junior … hit .372 with a .476 on-base percentage and .488 slugging percentage – en route to being named 2008 Offensive Player of the Year in 2008 … helped guide the Comets to a 2005 Regional Championship as well as leading her team to sectionals in 2005 and 2008 … was also named First Team All-Region and First Team All-County as a junior.

Personal: Born May 11, 1991... daughter of Terry and Cyndy Hartnett... plans to major in criminal justice and criminology.