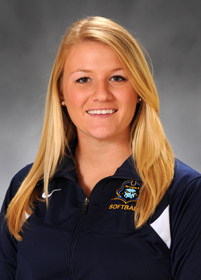 High School:  Is one of two Lady Buccaneer players from Unicoi County High School …. hit .396 with two home runs for the Blue Devils in 2008 … named All-Conference, All-State, and All-District as a catcher in 2008 and 2009 … was named the Most Promising Underclassman and Sweet 16 catcher by the Johnson City Press.