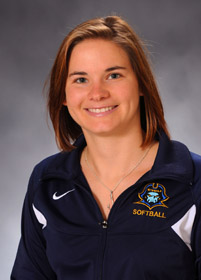 2011 Season:  Named First Team All-Atlantic Sun and also received Atlantic Sun All-Academic and Atlantic Sun Conference Scholar-Athlete honors … Led the Bucs in hitting and ranked fifth in the A-Sun with a .353 batting average … raised her batting average over 110 points from her freshman to sophomore season, while also tying for the team lead in hits (47) ... Eighteen of Lower’s 47 hits came against A-Sun foes – where she hit .360 – placing her eighth overall among the conference leaders … recorded a hit in 13 of her 19 conference games played, while also finishing the season with a .417 batting average and .625 slugging percentage after hitting leadoff for the Bucs in their final seven games of the campaign … the second-year starter strung together 11 multi-hit games, while hitting safely in six straight contests from 3/4-11 and recording hits in 12 of 14 conference games from 4/2-22 … her .353 batting average was also the third highest mark in program history, while her .504 slugging percentage ranks fifth.

2010 Season:  Was selected to the Atlantic Sun All-Academic Team … played in 41 games, making 39 starts … made 30 starts at second and the other nine at the DP slot … notched five multi-hit games and three multi-RBI contests … hit safely in five straight games from 3/6-3/12 … recorded first collegiate hit on 2/14 at Charlotte … belted a two-run homer in game two of the Furman series on Feb. 18.

High School:  Is a talented four-sport athlete out of Sebring High School, where she lettered in volleyball, cross country, soccer and softball … a consistent hitter as she has mounted a .500 or better batting average in her first three seasons, and was also a three-year Offensive Player of the Year and All-County Team selection … comes from a  very successful travel team – the Tampa Mustangs – as she led them to a 2008 ASA State Championship and finished in the top-20 at the ASA Nationals.