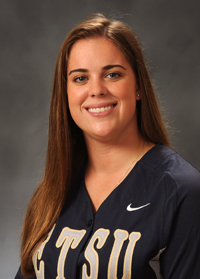 2014 Season:  The only ETSU player to appear in all 52 contests (52 starts), Baird capped her playing career with a record-breaking senior campaign. Baird began the season on a torrid pace, belting 10 home runs in her first 47 at bats. Finishing with 20 home runs on the season, Baird captured the program's record for single-season and career home runs (33), batting 0.329 and helping ETSU to seven conference wins, the program's most since 2008. Her 0.776 slugging percentage and 50 RBI were also single-season records. For the second consecutive season, Baird was named to the Atlantic Sun All-Academic First Team.

2013 Season:  One of just three players to appear in all 47 games for the Bucs (47 starts), Baird batted 0.271, driving in 25 runs, and hitting five home runs. Excelling both on and off the field, Baird was named to the Atlantic Sun All-Academic First Team.

2011 Season:  Received Atlantic Sun All-Academic honors … named to the Buccaneer Classic All-Tournament Team after going 10-for-21 (.476) with two doubles, three home runs, eight runs scored and 13 RBI in six games played at Betty Basler Field … played and started in all 48 games for the Bucs in her rookie season … was second on the team in doubles (8) and RBI (26), third in batting average (.273) and home runs (4), and fourth in hits (36) … recorded her first collegiate hit against the fourth-ranked Tennessee Lady Vols … belted her first home run in an ETSU uniform against Canisius on 2/20 in Charleston, S.C. … became the ninth player in Buccaneer history record a multi-homer game after registering a pair of round-trippers vs. North Carolina A&T on 3/13 … hit safely in nine consecutive game, including four 3-hit efforts … began her career with a six-game hitting streak, tying for the team lead … tallied seven multi-RBI games, including a 5-RBI performance against North Carolina A&T.

High School:  Hails from the same high school as current third baseman Amy Campbell at Girls Preparatory School … is a multi-sport athlete as she excels in both softball and basketball … comes from a winning background as she helped guide the Bruisers to four straight state championship titles and has been named "Best of Preps" the last two seasons according to the Times Free Press … Baird’s most productive season came in 2008 where she hit .475 with 10 home runs and 53 RBIs, and she hit an astounding .509 with 46 RBIs as junior.