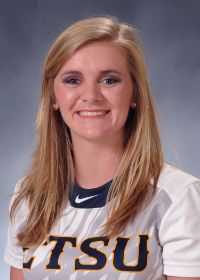 2016 Season (Senior): Cowart had a career season in her final season as a Buc hitting .295 in 40 games...During her final season, Cowart was named the SoCon Player of the Week (April 18) and SoCon Student-Athlete of the Week (April 20)...Cowart set multiple career-highs in a April 17 game at Mercer as she went 3-for-4 with two home runs and five RBI...Cowart also had a three-hit game against rival Chattanooga on May 8...Cowart was also named to the All-SoCon Academic Team and to the SoCon Honor Roll.

2015 Season (Junior): Hit .235 in 39 games with 35 starts...Drove in a career-high four runs in March 15 game vs. Eastern Michigan...Hit three home runs and drove in 17 runs...Drove in multiple runs in a game on three seperate occasions...Finished third on the team with three stolen bases...Was a member of the Spring Academic All-SoCon team and was named to the SoCon's Academic honor roll.

2013 Season (Freshman): Saw action in 30 games as a freshman, receiving a starting nod in 23 games... Recorded 14 hits... Scored nine runs... One of just three ETSU players to have a slugging percentage above .400... Made 51 putouts without committing an error.

Prior to ETSU:  Lettered in both softball and basketball at Grace Baptist Academy … named to the Tennessee Sports Writers Association All-State team as a senior and earned all-district all four years … compiled 146 runs, 119 RBIs, 180 hits and 72 stolen bases over her four year prep career … batted a career .420 average with a .585 slugging percentage and a .543 on base percentage … helped guide Grace Baptist to back-to-back runner-up finishes at the state championship in 2010 and 2011 and finally took home a state championship in 2012 … played club ball along with Boyd with  the Fury Fastpitch.

Personal:  Born May 5, 1994... daughter of Jonathan and Michelle Cowart... plans to major in exercise science.