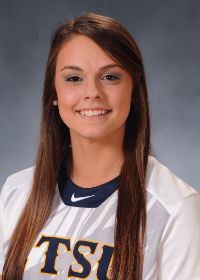 2016 Season (Senior): Boyd posted her best season of her collegiate career as a senior in 2016...Boyd hit .276 with five home runs and 19 RBI in 40 games...The Chattanooga, Tenn. native posted seven multi-hit games on the season, including a career-high 3-for-3 peformance vs. Alabama A&M on March 4...Boyd was also named to the All-SoCon Academic Team and SoCon Honor Roll following her senior campaign.

2014 Season (Sophomore): Appeared in 20 games, making 12 starts at the corner outfield positions... Recorded four hits... Scored three runs... Made 14 putouts without committing an error... One of just six players to record a stolen base (2-for-2).

Prior to ETSU: Earned all-state honors as a junior and a senior … helped her team to a state title as a freshmen and sophomore and led the squad to state runner-up as a junior and senior …  posted a career .358 batting average with 111 runs, 85 RBIs, 32 doubles and 45 stolen bases … as a senior, slugged .634 with a .407 batting average … was a member of the 2012 bowling state championship team … Outside of playing at Girls Preparatory School, Boyd played her travel ball for the Fury Fastpitch, based out of Chattanooga.