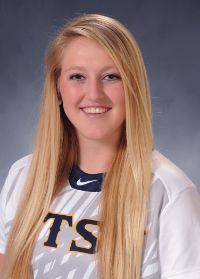 2016 Season (Senior): Appeared in 14 games and made 12 starts behind the plate in 2016...Totaled three hits on the season, including one in each of the two games vs. Alabama A&M...Turned in a perfect fielding percentage in 82 chances during her senior campaign.

2015 Season (Junior): Started 17 times in 2015 and appeared in three more games...Had a pair of two-hit games throughout the season...Hit a home run in the season opener against Youngstown State and another versus Presbyterian College...Hit .213 in 43 at bats and scored 10 runs while knocking in six.

Prior to ETSU: Helped guide her team to a conference championship in 2010 ...  as a sophomore, hit .382 with five home runs and 37 RBI and was named All-Northeast Tennessee … batted .420, with 15 doubles, five home runs, 35 RBI, while also picking off 12 runners from behind the plate as a junior ... the catcher/first baseman was a multi-sport athlete as she was named all-conference in softball, volleyball, and basketball … played her travel ball with the Fury Fastpitch Gold.