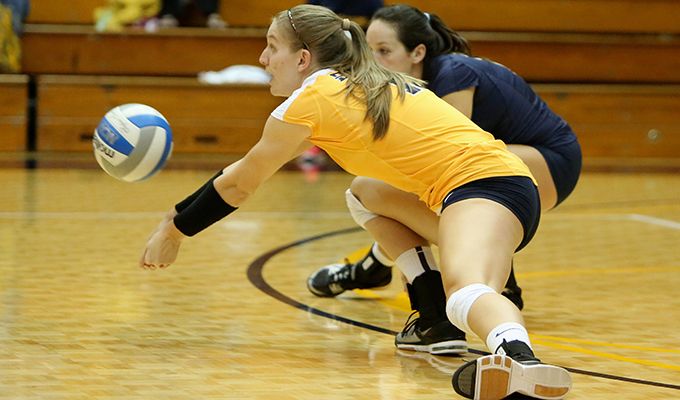 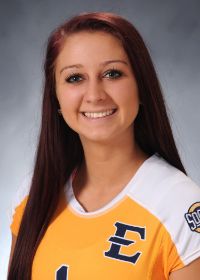 “I feel like we are moving forward,” said ETSU head coach Lindsey Devine. “In these non-conference tournaments it is all about improving. I also think we are competing well and our effort is where it needs to be.”

CSU Bakersfield Recap: The two teams exchanged points through the first part of the first frame until the Bucs used a 9-3 run to make their lead grow from 14-12 to 23-15. The run helped ETSU take the first stanza, 25-18. Khadijah Wiley (Columbus, Ga.) led the Bucs with five kills and no errors in the frame.

After a kill by Briana Allmon (Flower Mound, Texas) to give the Bucs a 4-3 lead in the second set, ETSU never relinquished the lead as it went on to take the frame, 25-20. Rylee Milhorn (Kingsport, Tenn.), Allison Humes (Somonauk, Ill.) and Wiley each had three kills to lead the Bucs.

Despite falling behind 6-2 early in the third, the Bucs turned the tables on the Roadrunners to not only regain the lead but also take the match, 25-17. Milhorn was one of the main reasons for the turnaround for the Bucs with seven kills. The Kingsport, Tenn. native finished the match with a team-high 13 kills in 29 attempts.

Troy Recap: The Buccaneers continued to roll in their second match of the day against Troy. After the Trojans scored the first point, ETSU scored six of the next seven to grab the lead and never gave it up as it went on to take the first set, 25-15. ETSU hit .577 with 17 kills in 26 attempts in the frame.

The Trojans and Buccaneers went back and forth in the second as the score was tied at six different points in the stanza, including at 20-20. Following the tie at that point, Troy scored five of the next seven points to even the match at one, 25-22.

Troy kept its momentum it earned in the second set into the third. The Trojans scored three of the first four points and built up a 10-point lead on the Bucs, 23-13. The Bucs sparked a 4-0 run following that but the deficit proved to be too large to overcome as they fell in the third, 25-17.

The fourth set was all about runs put together by the Trojans. Troy had a pair of 4-0 runs along with a 5-0 run to take the fourth and deciding set, 25-19. Milhorn and freshman AJ Lux (Shelbyville, Ind.) led the Bucs with four and three kills, respectively. Milhorn finished the match with 15 kills and 16 digs.

Notes on the Bucs: Following the invitational, Rylee Milhorn and Hailey Aguilar (Oswego, Ill.) were named to the All-Tournament team. Milhorn posted 45 kills (4.09 per set) along with 30 digs (2.73 per set) in the three matches. The Kingsport, Tenn. native led the Bucs in kills in each of the three matches this weekend. Aguilar averaged 4.55 digs per set and totaled 50 digs overall this weekend. Aguilar also tallied three service aces and eight assists, which ranked third and second on the team, respectively.

Next Up: The Bucs will return to action Sept. 11-12 when they compete in the Clemson Classic in Clemson, S.C. ETSU will take on Clemson, USC Upstate and Presbyterian in the Classic.