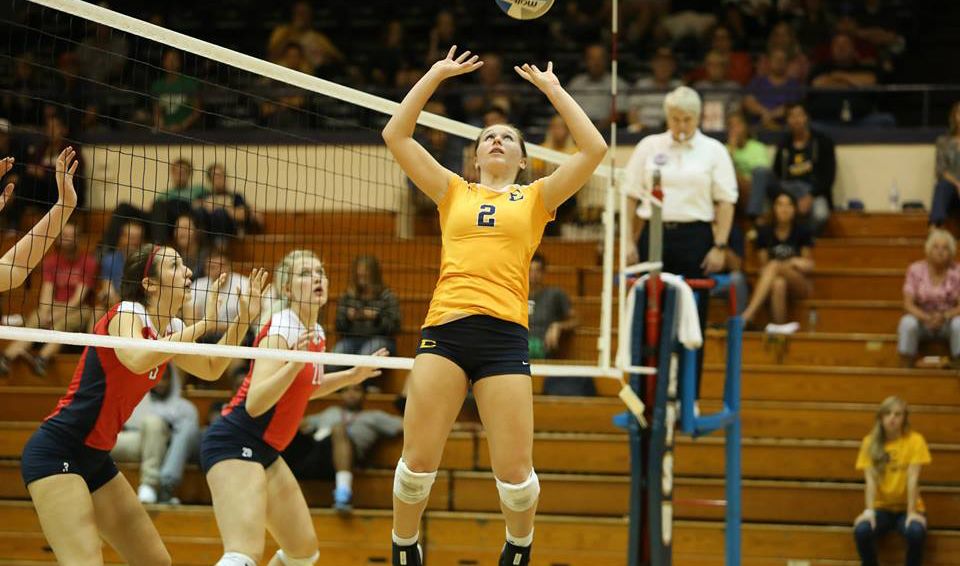 MOREHEAD, Ky. (Sept. 18, 2015) – The East Tennessee State University volleyball team won a pair of matches Friday at the Comfort Inn-Vitational to extend its winning streak to four. The Bucs picked up a 3-0 victory over Marshall and a 3-1 win over Morehead State. With the pair of wins, ETSU improves to 7-4 this season.

“When you walk away with two wins against very good teams, it is always a good day,” said ETSU head coach Lindsey Devine. “More importantly we are continuing to see progress on the things we are stressing and it is paying off.”

Marshall Recap: ETSU knocked off Marshall in three sets due to its work both offensively and defensively. The Bucs hit a season-high .333 in 84 attempts and totaled 10 blocks to notch their third consecutive sweep. Briana Allmon’s (Flower Mound, Texas) 13 kills led the Bucs’ offense, while Khadijah Wiley (Columbus, Ga.) and Kristen Favre (Plano, Texas) were a force on the block totaling seven and six, respectively.

The Bucs used a balanced offensive attack to take the first frame from the Thundering Herd, 25-19. Five players posted at least two kills in the first for ETSU and the team hit a collective .400 with just two errors in 30 attempts. Allmon led the Bucs’ offense with four kills in the first.

In the third and what proved to be the deciding set, the Bucs put together their best offensive performance of the match as they hit .429 as a team to take the third frame, 25-15. In addition to its work offensively, ETSU put the clamps down on Marshall defensively holding the Thundering Herd to a .000 hitting percentage.

Morehead State Recap: After trading points in the beginning of the first set, the Bucs went on a 7-1 run to separate themselves from Morehead State and took the first frame, 25-20. Allmon and Rylee Milhorn (Kingsport, Tenn.) led the Bucs with four kills in the first.

ETSU put together its best set of the match in terms of hitting percentage as it hit .324. The Bucs scored eight of the last nine points in the second to take the stanza, 25-16. The duo of Allmon and Milhorn combined for 10 of the Bucs’ 13 kills in the set.

The Eagles came back in the third set on a mission as it hit .412 in 34 attempts and it held ETSU to a match-low .154 hitting percentage. The combination of the two gave Morehead State its first set win of the match, 25-21.

In the fourth set, the Bucs and Eagles were neck-and-neck in the fourth frame as the teams were tied at 10 different points, but it was ETSU who pulled through winning the set, 27-25.

Next Up: ETSU, now 7-4 this season, will look to keep things rolling when it closes out the Comfort Inn-Vitational Saturday at 11 a.m. against Akron.