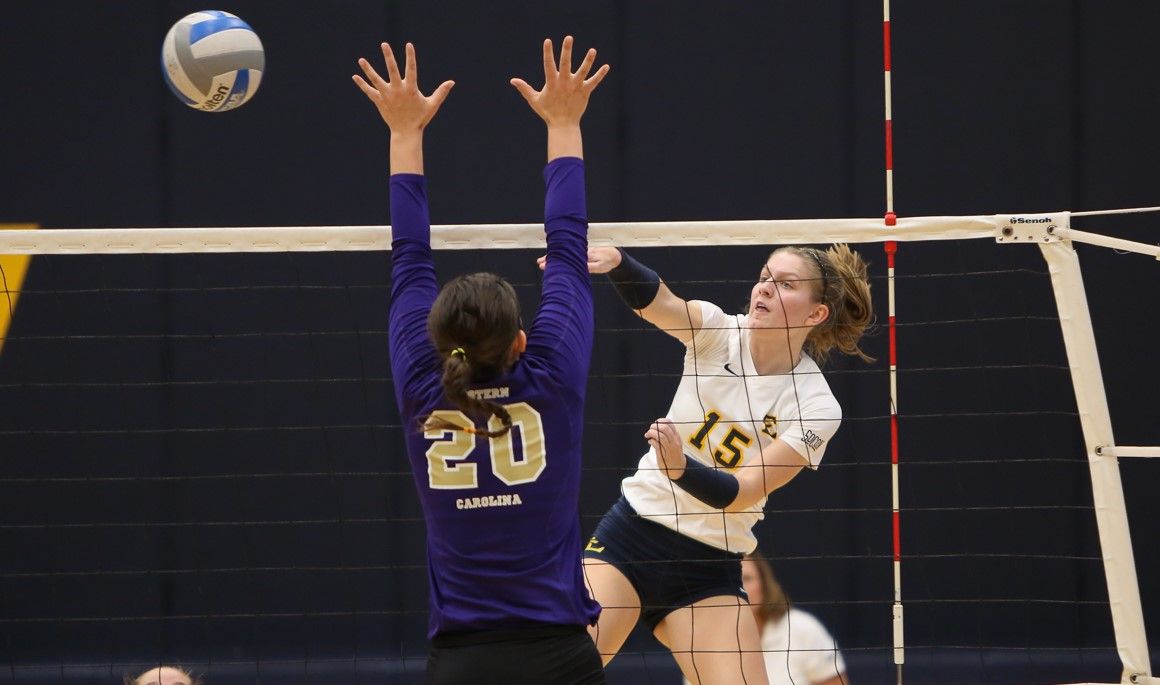 The Bucs were led by career-high performances from Rylee Milhorn (Kingsport, Tenn.) and Hailey Aguilar (Oswego, Ill.). Milhorn posted 23 kills, which tied the most for an ETSU player this season and Aguilar had 24 digs. Aguilar’s 24 digs are the most by a Buc since Katie Muey had 21 digs versus WCU Nov. 22, 2014.

ETSU started off slowly in the first as the Catamounts scored the frame’s first four points but it rebounded with a 5-1 run to tie the score at 5-5. After tying the score at five a piece, Milhorn carried the Bucs’ offense with six of ETSU’s 11 kills in the first en route to a 25-21 set victory.

After committing more attack errors than kills in the first, Western Carolina rebounded offensively and hit .278 in the second. The Catamounts totaled 16 digs to go along with four blocks to hold ETSU to a .119 hitting percentage. After totaling just two kills in in the first, Briana Allmon (Flower Mound, Texas) accounted for seven kills by herself in the second. Despite the outburst by Allmon, the gap of offensive production proved to be the difference as the Catamounts evened the match at 1-1 with a 25-21 set victory.

The third set was one of miscues by both teams. ETSU and WCU combined for 16 attack errors, three service errors as well as one block and a single ball handling error. Despite the mistakes, ETSU overcame them to take the third frame, 25-16.

Despite nine kills from Milhorn in the fourth frame, Western Carolina evened the match at 2-2 with a 25-23 victory. The Catamounts, who never trailed in the set, took advantage of 11 total errors by ETSU to force a fifth set.

ETSU and WCU traded points in the fifth all the way to the point when the score was knotted at 10-10. Unfortunately for the Bucs, the Catamounts went on a 5-1 run to close out the frame, 15-11.

Next Up: The Bucs will wrap up a four-match home stand Wednesday when they host Furman at Brooks Gym. The Paladins knocked off ETSU, 3-0, when the teams met earlier this season in Greenville, S.C. The match is scheduled for a 6 p.m. start time.