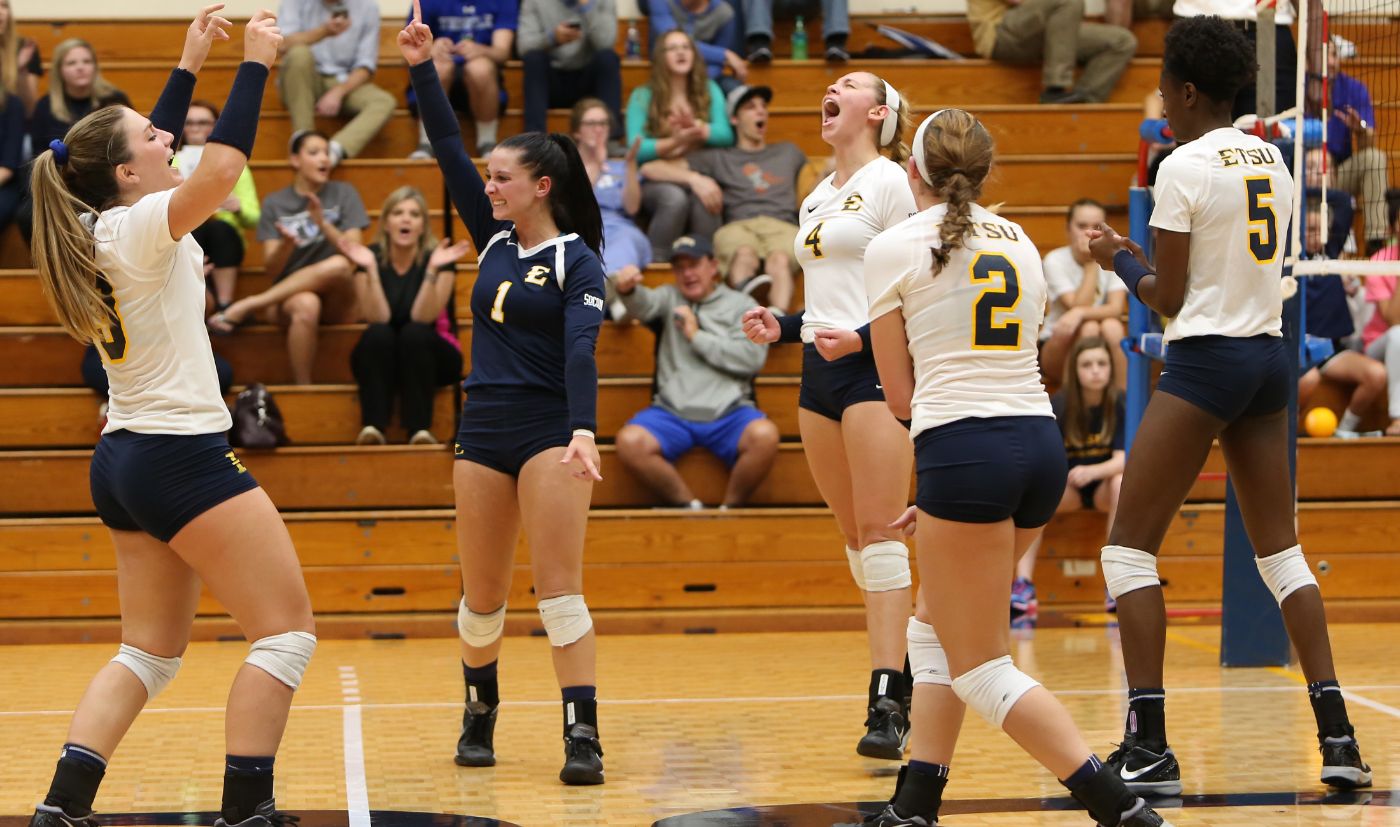 JOHNSON CITY, Tenn. (Nov. 3, 2015) - The East Tennessee State University volleyball team closes out its regular season road schedule this week when it travels to Wofford and UNCG. The Bucs, who are 16-9 and 7-5 in conference play, currently sit fourth in the league standings with two weeks remaining in the regular season.

Scouting the Buccaneers
The Bucs went 1-1 last week as they lost to Furman, 3-0, Wednesday but rebounded to defeat Mercer Saturday, 3-0. ETSU closed out the month of October with 5-4 record after notching a record of 11-5 in August/September.

Individually, the Bucs have three players that have 237 kills or more this season. Leading the way is Briana Allmon (Flower Mound, Texas) with 298, followed by Rylee Milhorn (Kingsport, Tenn.) with 284 and rounding it out is Khadijah Wiley (Columbus, Ga.) with 237.

On the defensive side of the ball, the Bucs have held their opponents to a .168 hitting percentage, which is the second-lowest in the SoCon and ranks 44th nationally. A large part of that number has to deal with ETSU’s work on the block as it leads the conference averaging 2.30 blocks per frame. Pacing the Bucs’ defensive effort has been Wiley with 113 total blocks and freshman libero Hailey Aguilar (Oswego, Ill.) who leads all SoCon freshmen with 332 digs.

Scouting the Opponents
Wofford:  The Terriers enter this week’s action on a two-match losing skid. Wofford, who fell on the road at Samford and Chattanooga by identical 3-1 scores last week, were on four-match winning streak prior to the past two setbacks. Despite the results as of late, the Terriers already have their most victories in a season since 2012.

Wofford’s offense has run through setter Molly Mayo this season. The sophomore from Oak Lawn, Il. leads the conference with 1,132 assists, which also is seventh-most in the country. Libero Jessica Graham paces the Terriers’ defensive efforts with 506 digs , which also leads the SoCon. Graham has been the SoCon Defensive Player of the Week twice this season.

UNCG: After falling to the Bucs on Sept 30, the Spartans have reeled off nine straight wins and sit a spot ahead of the Bucs in the league standings (third). Leading the effort for the Spartans’ offense has been Ashley Muench who not only leads the SoCon in kills (354) but also in total points (391). Defensively, UNCG is paced by its libero Katherine Santiago who leads the league averaging 4.88 digs per frame.

Quick Hits
On the Road again...
The Bucs have played well away from friendly confines of Brooks Gym this season. In true road games, ETSU is 5-5 and in neutral site contests it is 7-1.

Seeing double
Rylee Milhorn continues to be a double-double machine for the Bucs as she notched her tenth of the season in the win over Mercer Saturday. Milhorn is second on the team with 284 kills and 258 digs.

No lose November
ETSU will hope to replicate its success it had last season in November. The Bucs closed out the season’s final month with a 6-1 mark with the only loss coming in the conference tournament against Western Carolina.

Success Day and Night
The Bucs have been successful day and night this season. ETSU has a record of 10-5 in matches that started before 6 p.m. and it holds a 6-4 mark in matches beginning after 6 p.m.

Home Stretch
There are only four matches remaining in the regular season with two on the road and two at home.  Three of the four teams the Bucs will face to close out the season have a winning record.

Quicker the Better
ETSU has only played one five-set match all season and that was Oct. 24 vs. Western Carolina. ETSU has a record of 10-4 in three-set matches and a mark of 6-5 combined in four and five-set matchups.

Series History vs. Opponents
The Bucs have held the edge over the Terriers in the all-time series, 15-5. However, the Terriers knocked off ETSU earlier this season, 3-1, inside Brooks Gym.

ETSU also holds the lead in the series against UNCG as it has won 16 of the 25 all-time meetings. Despite the nine-match advantage for the Bucs overall, the two teams have split the last four meetings