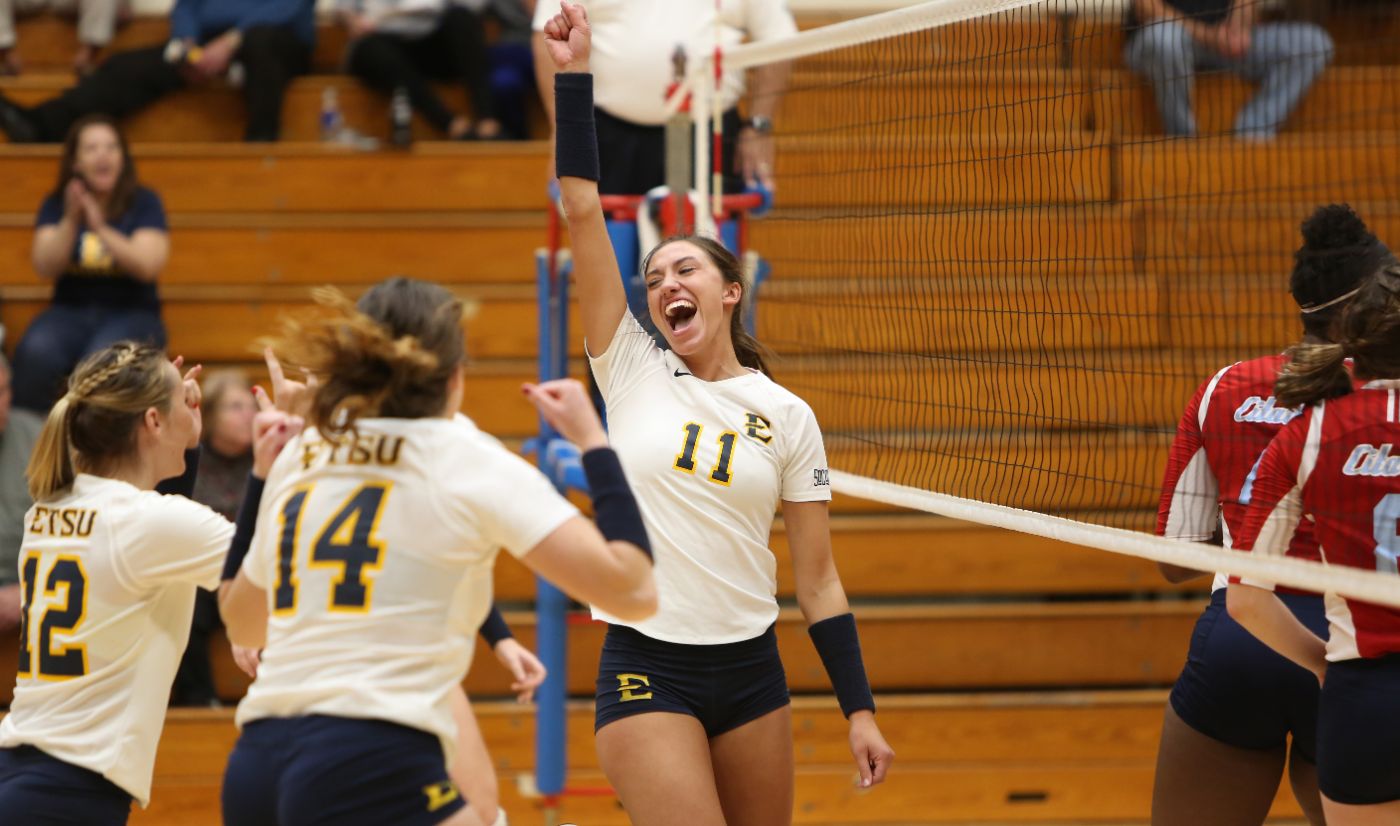 GREENSBORO, N.C. (Nov. 7, 2015) – The East Tennessee State University volleyball team snapped UNC Greensboro’s 10-match winning streak Saturday evening at Fleming Gym with a 3-0 sweep of the Spartans (25-21, 27-25, 25-17). With the victory, the Bucs not only swept the season series from UNCG but they also extended their winning streak to three matches.

Leading the way for the Bucs was sophomore Rylee Milhorn (Kingsport, Tenn.) who notched her 12th double-double of the season with 15 kills and 13 digs. Setting up Milhorn most of the night was Kristen Favre (Plano, Texas) who totaled 44 assists, which was is the most for an ETSU player in a three-set match this season.

“The team was focused and they executed the game plan,” remarked ETSU Head Coach Lindsey Devine after the match. “Our front line read the ball well, which not only helped our back line out but also forced UNCG to do something else.”

Set 1: Despite being down by as many as five points (11-6), the Buccaneers rallied to win the first frame, 25-21. Milhorn paced the Bucs’ offense in the stanza with six kills, while Schafer had a part in five blocks (two solo, three assists) to complete the comeback for ETSU.

Set 2: ETSU began the second set with four straight points, but the Spartans answered with a five-point spurt of their own. The two teams battled into extra points until the Buccaneers notched back-to-back points to take the frame, 27-25. Four different ETSU players had three or more kills in the second, including Briana Allmon (Flower Mound, Texas) who led the group with seven.

Set 3: The Bucs pulled ahead of UNCG early when it committed a service error, 3-2. Once ETSU gained its lead, it never looked back as it lead by as many as eight points which proved to be the final difference, 25-17. The Buccaneers held the Spartans to a match-low .095 hitting percentage in the final frame.

Next Up: The Bucs will wrap up the regular season with a pair of matches at Brooks Gym on Nov. 13-14. ETSU will host Chattanooga Friday and Samford Saturday.

“As long as we keep on doing what we are doing now and not look too far ahead we should give ourselves a chance to be successful next weekend and close out the regular season strong,” said Devine.

The start times for both matches are set for 2 p.m.