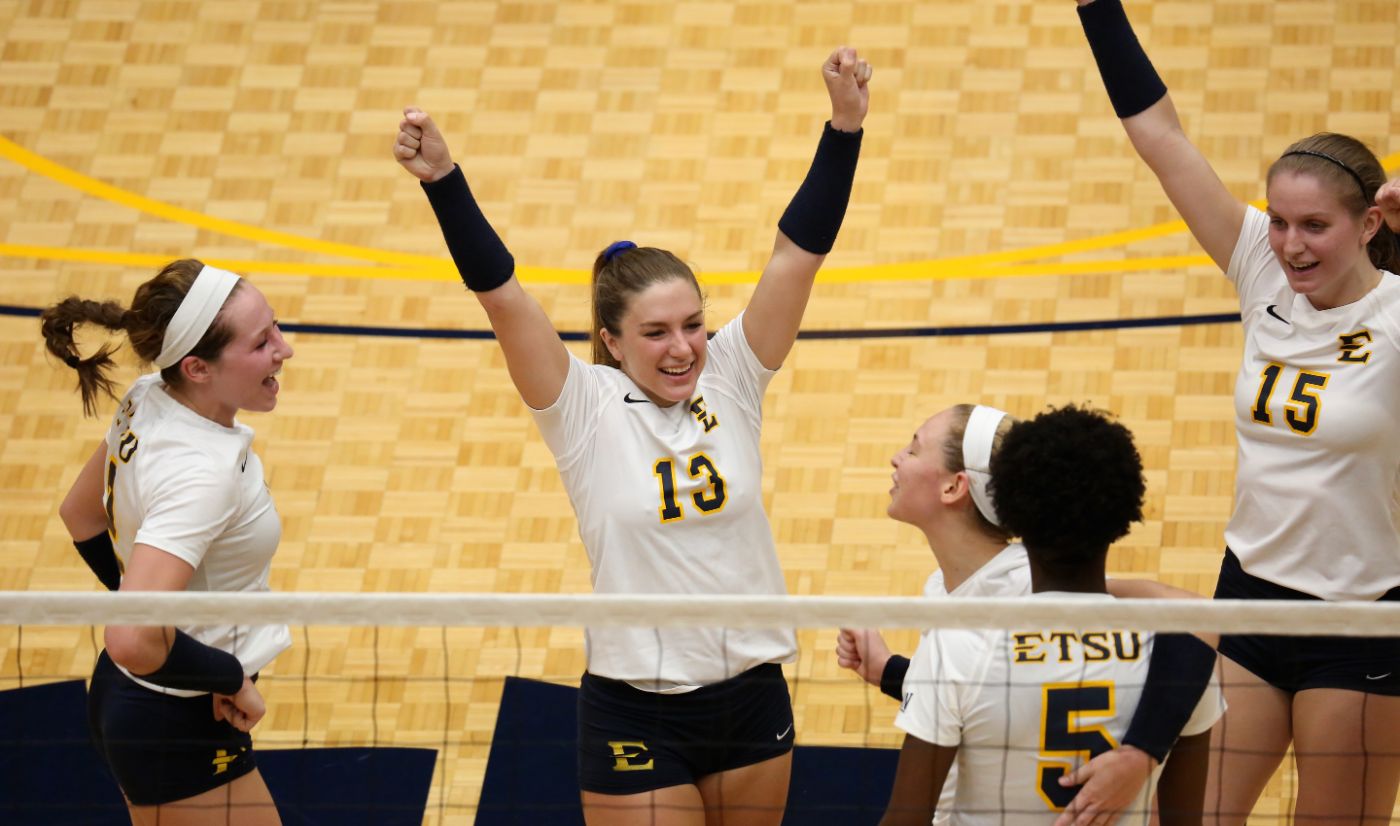 JOHNSON CITY, Tenn. (Nov. 12, 2015) - The ETSU volleyball team will wrap up its regular season this weekend with a pair of matches at Brooks Gym. The Bucs will take on Chattanooga Friday and Samford Saturday. Both matches are scheduled for a 2 p.m. start time.

Scouting the Buccaneers
ETSU won both of its matches last week as it knocked off Wofford in four sets Wednesday and followed it up by ending UNCG’s 10-match winnning streak Saturday with a 3-0 win. With the pair of victories, the Bucs improve their record to 18-9 overall and 9-5 in Southern Conference play. The 18 wins by ETSU is the most by the team since the 2013 season when it won 22 matches.

The Buccaneer offense ranks in the upper half in most offensive categories in the SoCon. Pacing ETSU’s offense has been the trio of Briana Allmon (Flower Mound, Texas), Rylee Milhorn (Kingsport, Tenn.) and Khadijah Wiley (Columbus, Ga.). The trio has 322, 314 and 262 kills, respectively. In addition, Milhorn leads the team with 30 service aces.

ETSU has been strong defensively all season long holding its opponents to a .166 hitting percentage, which ranks 34th nationally and second in the SoCon. Spearheading the Bucs’ defensive effort has been the duo of libero Hailey Aguilar (Oswego, Ill.) and Wiley. Aguilar, who was named the SoCon Defensive Player of the Week Monday, leads the team with 377 digs. Wiley, meanwhile, has been the ETSU’s best player on the block averaging 1.30 blocks per set, which leads the conference and ranks 33rd in the nation.

Scouting the Opponents
Chattanooga:  The Mocs enter the final weekend of the regular season leading the Southern Conference with a 22-5 overall record and an 11-3 mark in league play. Chattanooga has seen huge improvement in its program as this season is the first time the Mocs have had a winning record since 2008 when they complied record of 19-17.

Individually, the Mocs’ offense is led by the trio of Kristy Wieser, Lauren Gainer and Sarah Batterton who all rank in the top 10 in the SoCon in hitting percentage. Setting up Chattanooga’s attack has been Lauren Greenspoon who is 15th in the nation averaging 11.41 assists per frame. Defensively, the Mocs rank in the upper half of the league in both digs and blocks. Pacing the defensive effort is Catherine Cason who has third-most digs in the conference with 468.

Samford: After posting a record of 8-11 through its first 19 matches, Samford has reeled off five straight wins, including a pair against two teams in front of them in the conference standings in Furman and Chattanooga. The Bulldogs’ successs is truly a team effort as they have just one player checking in on the NCAA statistical leaderboard and that is Kate Neisler. Neisler is averaging 0.36 aces per set, which ranks 72nd nationally and third in the SoCon.

Winning Ways
ETSU has sealed a winning season in 2015 with an 18-9 record overall. It is the fifth time in six seasons that the Bucs have had a winning record. The only time in program history that this was done before was between 1987 and 1993 when the team reeled off seven consecutive winning seasons.

Series History vs. Opponents
ETSU and Chattanooga have met nearly 50 times in the series history with the Bucs holding a slight edge, 31-28. However, the Mocs knocked off ETSU in four sets earlier this season in Chattanooga. The series histoy against Samford is far less storied as there have been only three all-time meetings with ETSU winning two of the three matches. One of those victories came Oct. 9 at Samford.