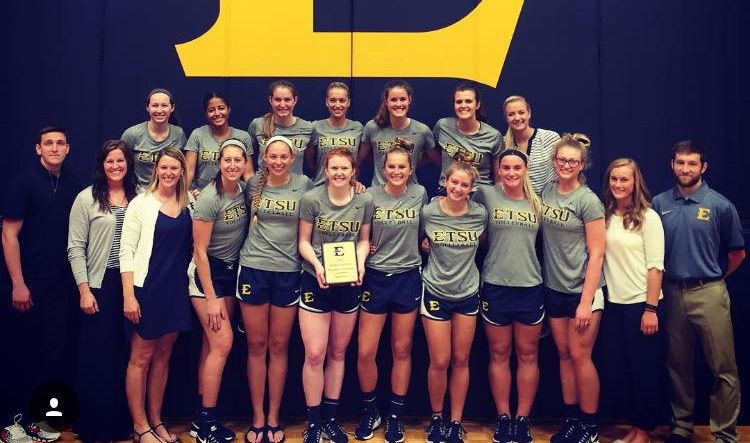 JOHNSON CITY, Tenn. (August 27, 2016) – The ETSU volleyball team picked up two more 3-0 sweeps on day two of the DoubleTree Hotel Buccaneer Challenge Saturday afternoon at Brooks Gym. The pair of victories, which were over Troy and USC Upstate, not only captured the tournament championship for the Bucs but it also gave them their first 3-0 start since 2012.

Troy Recap: Rylee Milhorn (Kingsport, Tenn.) totaled a season-high 16 kills on 31 attempts (.452 hitting percentage) to help propel the Bucs to their second straight sweep to open the 2016 season (25-22, 27-25, 25-17) over Troy. The victory is ETSU’s first ever victory over the Trojans in four all-time contests.

The main difference in the first two sets and the final frame was that ETSU cut out the majority of miscues that allowed Troy to hang around. The Bucs had 20 errors between attack and service errors in the first two stanzas. Comparatively, ETSU only had three errors, which were all on the attack, during the third set.

USC Upstate Recap: The Bucs came out firing on all cylinders in their second match of the day against USC Upstate as they hit .343 as a team on their way to their third straight 3-0 victory (25-21, 25-15, 25-20). The .343 hitting percentage is the second-highest for ETSU in any one match over the past two seasons with the only match higher being an effort against Samford on Oct. 9 last season where it hit .353 as a team.

As the high team hitting percentage would indicate, the Bucs had several players with efficient attacking numbers. Six different players had 13 or more attacks and five of those players had hitting percentages of .294 or higher. Leading the way was Briana Allmon (Flower Mound, Texas) and Braedyn Tutton (Courtice, Ontario, Canada) who posted 10 and eight kills, respectively. Defensively, ETSU was also solid totaling 10 blocks and 45 digs against the Spartans. Johnson City native Renzey Rice paced the Bucs with 14 digs.

Up Next: The Bucs will hit the road for the first time this season next weekend as they will travel to Lynchburg, Va. to compete in the Liberty Invitational. ETSU will open the event with a match against Hampton at 4:30 p.m. Friday before closing out the weekend with matches against USC Upstate (10 a.m.) and Liberty (7 p.m.) Saturday.